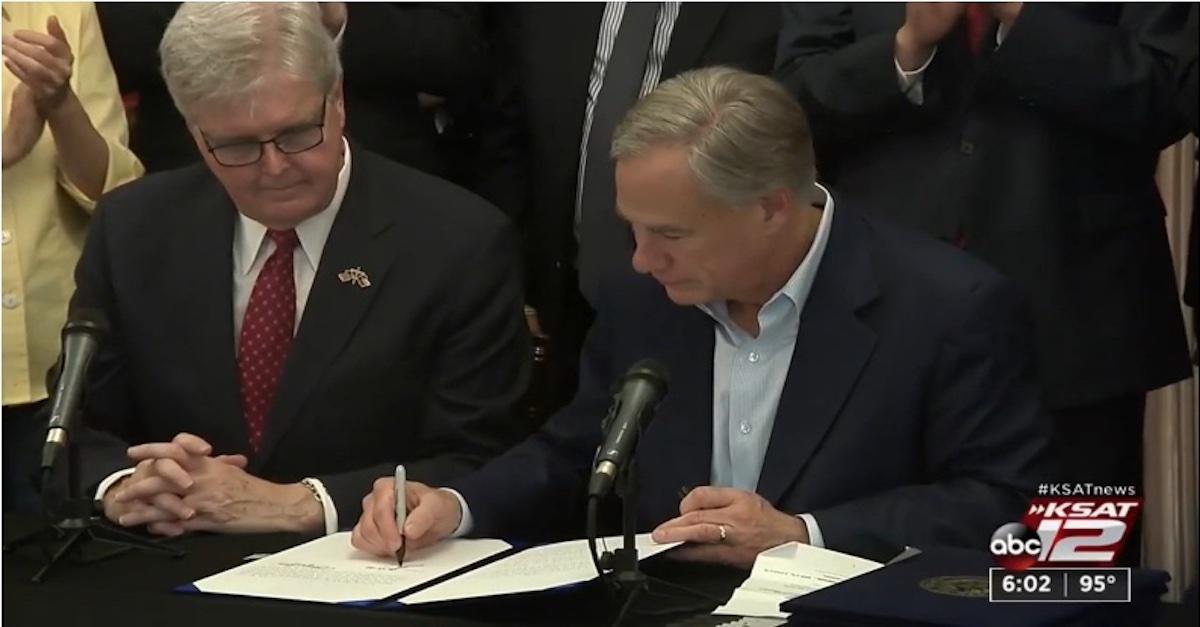 Two advocacy groups that focus on expanding Latino voter access have sued multiple Texas counties over Senate Bill 1111, which restricts voters’ access to the polls depending on what type of address they use on their registration form.

The League of United Latin American Citizens (LULAC) of Texas and Voto Latino have sued officials in six counties—Travis, Bexar, Harris, Hidalgo, Dallas, and El Paso—over the implementation of the bill, saying that it violates the First, 14th, and 26th Amendments. The lawsuit seeks to stop the officials from implementing the provisions SB 1111 before it is set to take effect on Sept. 1.

LULAC and Voto Latino’s work includes voter education, registration, and get-out-the-vote campaigns aimed at Latino voters in Texas. According to the complaint, SB 1111 will force the groups to “expand and divert additional funds and resources … to combat SB 1111’s effects on its core constituency, and to assist its constituents in navigating the various additional hurdles that impede access to the franchise and threaten to silence the voices of Latinx voices.”

Specifically, the bill prohibits Texas voters from establishing residence for the purpose of influencing the outcome of elections, using previous residences as their home address for purposes of registration (even if they consider those residences to be their home), and requiring additional documentation for voters who use post office boxes for their residences.

SB 1111, which Gov. Greg Abbott (R) signed into law on June 16, “imposes vague, onerous restrictions on the voter registration process, chilling political participation and further burdening the abilities of lawful voters to cast their ballots and make their voices heard,” the complaint says.

The rights groups say that the prohibition against establishing residence for the purpose of voting in Texas violates the First Amendment right to freedom of speech, not only for voters, but for candidates.

“Voters cannot relocate to or within the State to effect political change; volunteers and advocates cannot establish residence if they do so to promote a given candidate or issue; and candidates themselves cannot move or otherwise base their residence on their desire or ability to appear on the ballot,” the complaint said, adding that the restriction serves neither a legitimate governmental interest nor a compelling one.

The bill also violates the 14th Amendment, according to the complaint.

“SB 1111 burdens voters who rely on post office boxes for their voter registrations,” the complaint says. “These voters are required to produce corroborating documentation, thus imposing additional barriers on the franchise. And the right to vote for these voters who are unable to produce this documentation is abridged entirely.”

Finally, the plaintiffs allege, the bill violates the 26th Amendment, which grants the right to vote to U.S. citizens over the age of 18.

“The new law will also have a particularly burdensome impact on college students and other young voters—a demographic group whose political participation is permanently changing the Lone Star State’s electoral landscape—by preventing them, for instance, from registering at their prior home addresses when they relocate temporarily to attend school,” the complaint says.

The plaintiffs also argue that the law “prevents newly enfranchised young Texans from effectively exercising their right to vote,” in violation of the 26th Amendment.

It was not clear why the plaintiffs named officials from the six defendant counties in the complaint. Attorneys for the rights groups did not immediately respond to Law&Crime’s request for comment and clarification. Neither did Abbott’s office.

[Image via screengrab from KSAT/YouTube]