1 Dead, 3 Injured After Driver Goes on Rampage with Crowbar and Gun 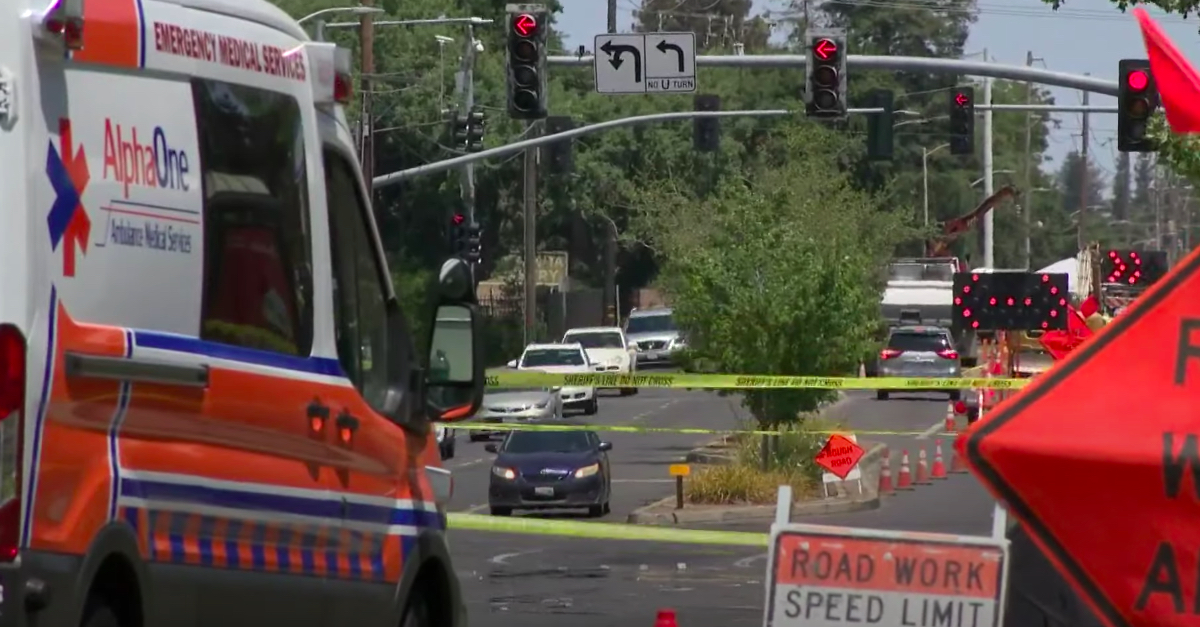 First responders on the scene after a pickup truck driver’s rampage left one dead and three injured.

A pickup truck driver in California on Monday allegedly ran over two pedestrians with his car, then exited the vehicle and attacked two other people using a handgun and a crowbar, several local news outlets reported.

The Sacramento County Sheriff’s Office on Monday said there was a “large police presence” at an intersection in Carmichael, California due to a “hit-and-run and shooting,” and noted that a section of the roadway was completely blocked off from traffic. However, subsequent reporting on the incident revealed a far more bizarre and chaotic scene.

According to a report from The Sacramento Bee, Sacramento County Sheriff’s Office spokesman Sgt. Rodney Grassmann said the incident occurred at approximately 9 a.m. when a black pickup truck began driving “up on the sidewalks, jumping curbs.” The truck then ran over a pedestrian. When a second pedestrian came to the aid of the first victim, the driver of the pickup truck “circled back” and “hit that person who came to help our first victim,” Grassmann said, per The SacBee. The first victim was pronounced dead at the scene. The second victim was taken to a nearby hospital for treatment though their condition was unknown as of Tuesday afternoon.

The pickup then sped away but made it less than a block before crashing into the rear of another vehicle. The truck then continued forward, pushing that vehicle approximately 100 yards, Grossman said. The driver of the pickup truck then exited his vehicle wielding a crowbar and proceeded to attack the other car and the female driver inside.

“That suspect then got out of the truck with what I understand is a crowbar or something similar to it, (and) started beating that vehicle and hitting that victim,” Grassmann said. “That victim was able to escape that vehicle and run from our suspect.”

An eyewitness to the attack told local news outlet ABC10 that the scene was devolved into chaos at the point, with several onlookers attempting to intervene.

“I was driving eastbound on Cypress and the suspect was already out of the car beating a woman inside her car as I pulled up,” Mike Guido told the outlet. “There were tons of people here. They were getting out of their cars coming to help until the firearm came out. And that’s when people started to flee.”

A nearby security guard allowed the female driver to get into his car and take refuge from the attack. Her wounds were described as superficial and she declined to go to the hospital.

After attacking his third victim, the driver of the pickup truck allegedly took out a handgun and walked to a nearby trailer home. When a man came out of the trailer, Grassmann said the two “had some sort of physical altercation” and struggled over the gun, which “went off,” injuring the man from the trailer. It was not clear whether the fourth victim was injured by the firearm or the crowbar. A second person then exited the trailer wielding a firearm and shot the suspect in the upper body, putting an end to the rampage. The fourth victim was taken to a nearby hospital for treatment; their condition remains unknown.

Grassmann said the suspect was “alert and awake” when law enforcement authorities took him into custody, adding that he was taken to a nearby hospital to treat the gunshot wound.

“I don’t think that any of these parties knew each other,” Grassmann told the SacBee. “We don’t have a motive, and it’s unclear to me whether the suspect was under the influence of anything or not.”

The Sacramento Sheriff’s Office did not immediately respond to an email from Law&Crime seeking additional details about the incident and the identity of the suspect.