Susan Wright Calls FBI After Robocall Accuses Her of Murder 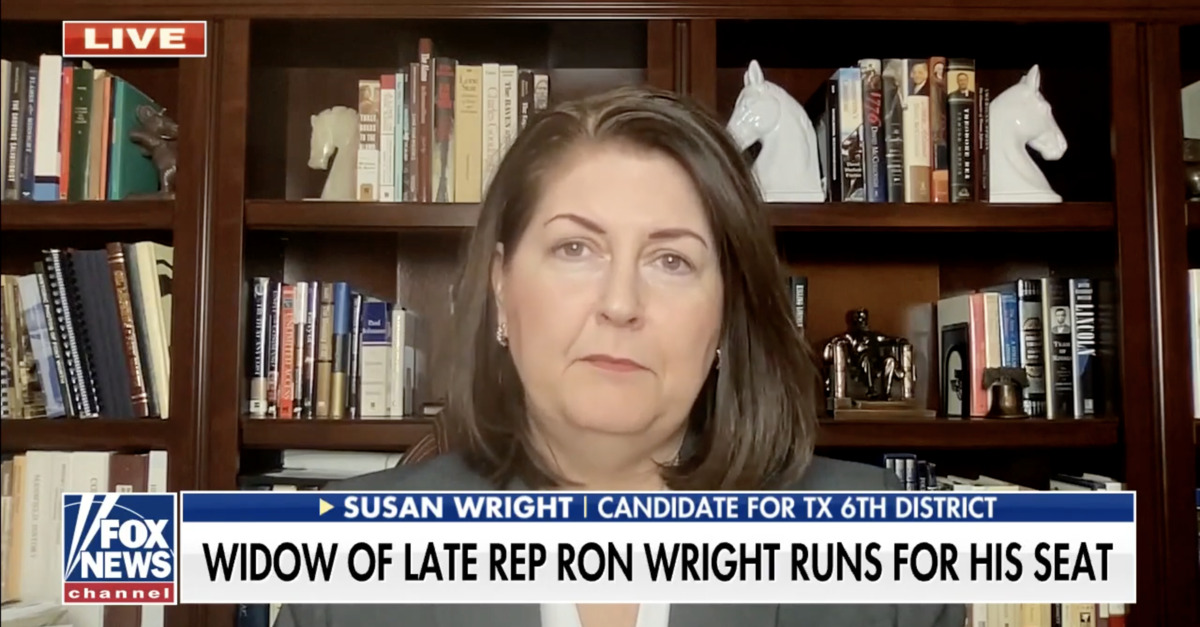 A Texas special election is being closed out in classic American fashion, but with a novel twist: dirty tricks by way of a murder accusation.

A robocall is currently targeting Susan Wright, who is running to replace her husband in Congress. Former representative Ron Wright (R-Tex.), who had been living with cancer for a while, died earlier this year after being diagnosed with COVID-19.

“Susan Wright murdered her husband,” a woman’s voice says on the robocall message. “She [is] now running for Congress to cover it up.”

The smear campaign alleges that Susan Wright intentionally contracted COVID-19 in order to murder her husband for life insurance money. It came to the campaign’s attention on Friday

Citing “confidential sources,” the voice on the call claims Mrs. Wright “obtained a $1 million life insurance policy on the life of her husband, the late congressman Ron Wright, six months before his death.”

The scandalous call continues as follows:

According to hospital administration at Baylor hospital, Susan Wright cheerfully confided in a nurse that she had purposely contracted the coronavirus from a friend after taking a test that confirmed she had the antibodies necessary to overcome the virus. Susan Wright did this knowing full well that her husband, late congressman Ron Wright, was immunocompromised due to persistent complications with lung cancer. Baylor hospital has made a formal criminal referral to the Federal Bureau of Investigation, and they have now opened a formal criminal inquiry into the matter. It is unclear whether this constitutes premeditated murder under Texas state law. But it is clear that the voters of Texas’s 6th Congressional District deserve to know the truth about Susan Wright and her involvement in the death of her husband.

Notably, the call does not identify its source, which is a possible violation of federal campaign finance law.

“This is illegal, immoral, and wrong. There’s not a sewer too deep that some politicians won’t plumb,” Wright said in a statement. “Imagine it: someone is attacking my late husband, the love of my life, a man who gave me such joy in life. I will not let darkness rule. I live by the light of Christ and his truth will sustain me — as it sustained me when I lost my husband.”

After supporters reported receiving the call, Wright’s campaign contacted the FBI and the U.S. Department of Justice.

The Republican Party of Texas suggested that its members vote for Wright in the primary so as not to reward the “liars and hucksters responsible” and called the robocall “slanderous fake news” in a statement obtained by Fort Worth-based CBS affiliate KTVT.

Multiple reports note that call recipients have said the calls are about a minute in length and are being made by a blocked number.

Twenty-three candidates are running in the race to replace the recently deceased lawmaker who served in various municipal positions as an elected and appointed official for decades in North Texas. He became something of an institution in Tarrant County.

According to the Texas Tribune, the race is highly competitive, at least when it comes to the Democrat-versus-Republican runoff.

Susan Wright is likely favored to win the first round due to a late-breaking endorsement from former president Donald Trump, who remains highly popular with Lone Star State Republicans.

“When we heard reports of this criminal smear of a voicemail attacking Susan, we immediately referred the matter to law enforcement and started cooperating with authorities,” campaign consultant Matt Langston said in a statement. “Susan’s opponents are desperate and resorting to disgusting gutter politics because they know she’s the frontrunner. I’m looking forward to someone going to jail over these robocalls, but that’s a Sunday problem. On Saturday, we win.”

Results in the race will be made available after 7 p.m. CST.

Listen to the call here: