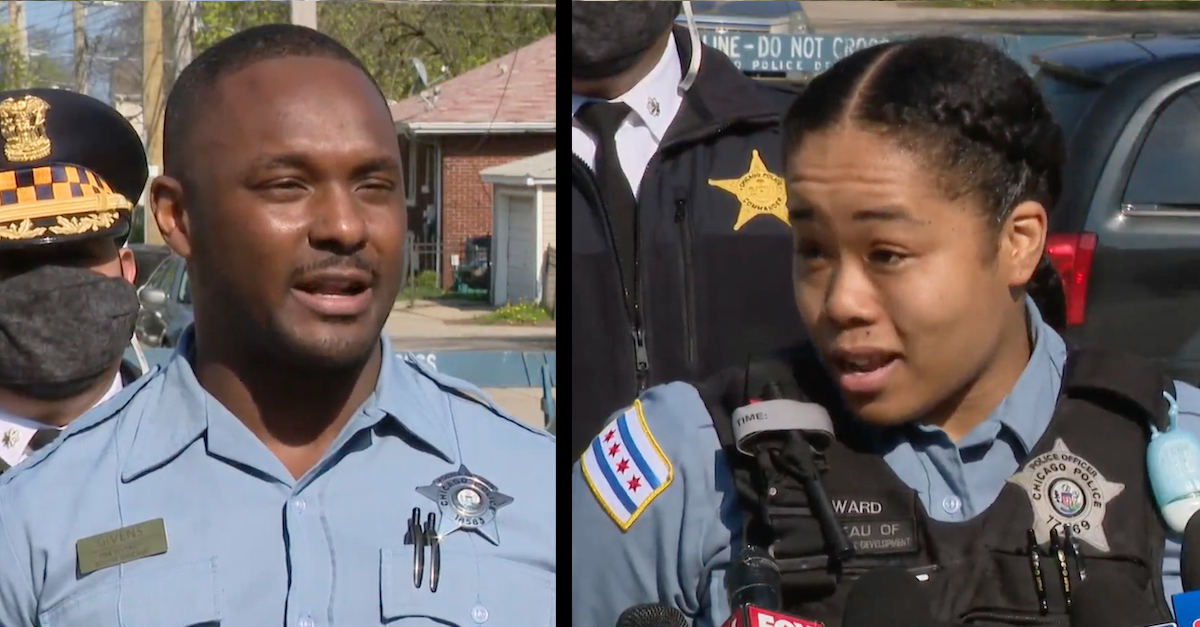 Two young police officers are being credited with saving the life of a 13-year-old shooting victim on Chicago’s south side.

Julius Givens and Rhonda Ward, who are partners on the force and who each have been with the department for about two years, were captured on video hauling a seriously injured Swaysee Rankin to their squad car and racing the boy to Comer Children’s Hospital.

A ShotSpotter alert (that’s a gunshot detection system) drew police to the area of East 82nd Street and South Coles Avenue. Police have described the attack as a drive-by shooting. Someone in a red Jeep Cherokee approached both Rankin and Randle Archie, Rankin’s 14-year-old cousin.  Whoever was in the SUV fired and drove off.  Both boys were critically wounded.

“A lady waved us down and said there was someone shot in her backyard across the street. We saw a young man waving his hands saying he was shot,” Givens said at a press conference. “Officer Ward wasted no time. I told her to grab his legs, that we were going to have to transport him ourselves.”

They knew they didn’t have time to wait for paramedics, so the pair carried the teen to the back of their squad car — a distance of between one hundred and two hundred feet.

“Stay with me,” Ward said she told the injured boy.  “We’re gonna make this trip together.”

“The fact that he is a 13-year-old child, as soon as we arrived on scene, the first thing we realized is how young he is,” Givens said. “He was all but a boy, and that does not leave you. And that sped up our process.”

Givens stayed in the back of the squad car with Rankin while Ward drove to the hospital — lights and sirens activated.

“He was in and out of consciousness, so we were trying to keep him alive and keep him up,” Givens recalled.

“We got there right on time for him,” Ward added.  “That was the main goal.”

“I feel like my baby was a hero to somebody, and somebody returned the favor,” said Ashley Jackson, Rankin’s mother, to a team of assembled reporters.

Jackson said her son’s stomach needed to be sewn back together by surgeons.  She said Rankin was walking from a friend’s home to his cousin’s house when the gunfire rang out.  She clarified for the public that the shooting was “absolutely not gang related.”

“My son is absolutely not gang affiliated,” she emphatically continued.  “From my knowledge, it was a drive-by shooting, just something random.”

“These kids do not deserve it.  These are babies laying in these hospital beds that don’t even know why they’re there,” Jackson added.  “It’s ridiculous.  This violence has definitely got to stop immediately. ”

She pleaded for the shooter to turn himself in and to face justice.

Another relative said the violence in Chicago was “crazy.”

Both relatives heaped glowing praise upon the two officers.  Though Jackson said she understood it was medically dicey to move an injured person, she realized the officers made the right call this time.

“Those officers were quick,” Jackson said.  “I can’t praise you enough.”

Officer Ward said her efforts allowed her to fulfill one of her career goals.

“It was just heartwarming for me that I could actually save a life, because that’s what I got on this job to do,” she said.

Watch WBBM’s report below (which contains video of the officers carrying the boy to their car):