No Criminal Indictment for Officer Who Shot Ma'Khia Bryant 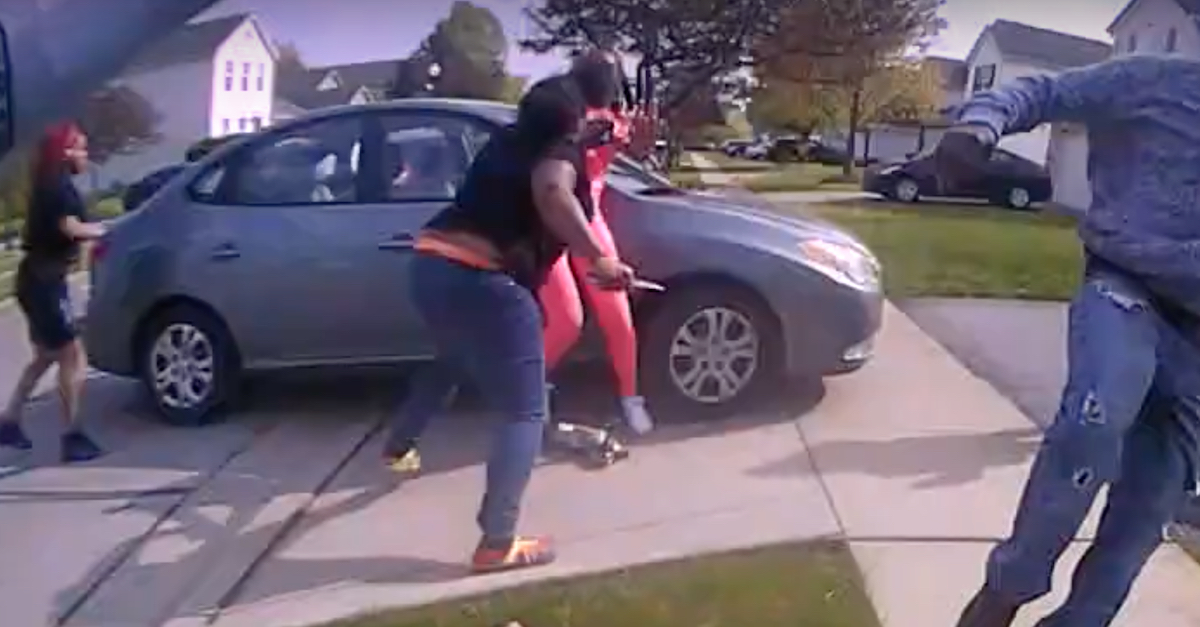 A still frame from Officer Nicholas Reardon’s body camera video shows Ma’Khia Bryant (center, in black shirt and jeans) in the process of shoving a knife (visible in her right hand) toward Tionna Bonner (center, in pink). Officer Reardon opened fire split seconds later as Bryant’s knife was near Bonner’s head and neck. Bonner said she felt the blade against her skin.

An Ohio grand jury has refused to indict a Columbus police officer who shot and killed Ma’Khia Bryant, a teen who was in the process of shoving a knife toward another person’s throat, it was announced this week. The fatal shooting happened on April 20, 2021, the same date a Minnesota jury convicted Derek Chauvin of murdering George Floyd, Jr.

“Under Ohio law the use of deadly force by a police officer is justified when there exists an immediate or imminent threat of death or serious bodily injury to the officer or another,” the special prosecutors said in a widely reported press release.  “The Franklin County Grand Jury has completed a full and comprehensive review of the incident and has returned no criminal charges.” 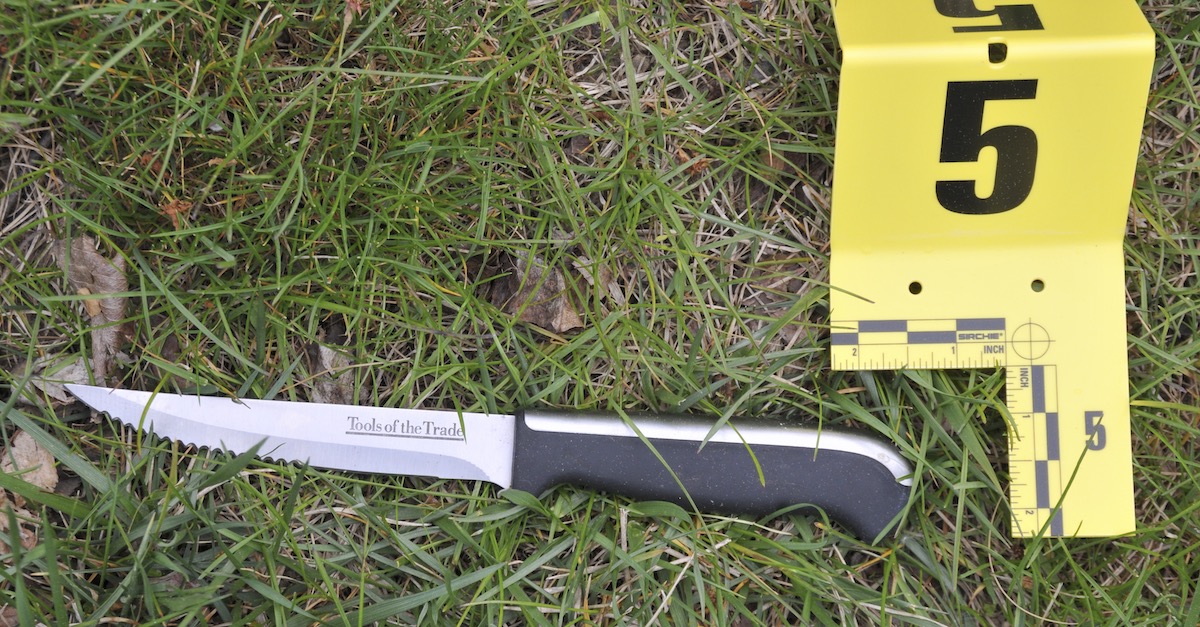 Bonner said Bryant was among a group of younger foster children who “were wearing her mother out by not listening and not doing anything to help with household chores,” the BCI interview document says.  Bonner said her opinions of the girls — including Bryant — led to a deterioration of their relationship and then to an altercation on a day when Bryant was carrying a knife.  From Bonner’s BCI interview report:

Bonner said she advised the girls they needed to help clean before Moore arrived home for work. Bonner stated at this point in time she and the two girls started arguing and they accused Bonner of calling them “bitches.”

As the verbal arguing continued, Bonner said the two girls threatened to beat her up.

The argument continued for more than half an hour and spilled out onto the street, Bonner told the BCI.

Bonner said others, including Bryant’s father, showed up; so did a police car.

Bonner then said Bryant stabbed the friend she had called to the area and that Bryant’s father encouraged the stabbing.

According to her statement, Bonner says this is what happened next:

Bonner said right afterwards, she see’s Ma’khia turn and come after her. Bonner stated Ma’khia was still holding the knife and started to stab her. At this point in time, Bonner said she heard the CPD Officer shoot his gun. After Bonner heard the shots being fired she immediately dropped to the ground, rolled, and took off running. Looking back, Bonner said the officer saved a life, she was not sure who’s life, whether it was her life or [her friend’s], but he saved a life. Bonner went on to say if the officer was not there somebody would have been hurt severely. Bonner also stated she did not care how big the knife was, Ma’khia should not have had it and her grandmother repeatedly told Ma’khia to drop it. Bonner said she also remembered Ma’khia saying prior to the stabbing, that she was “on one today.”

Bonner said she retrieved a knife for her own protection at one point during the altercation but put it back in her car before the first officer arrived at the scene.

Bonner also said Bryant was so close that she could feel the blade of the knife:

Bonner mentioned to Jenkins she believed the officer was too far away from Ma’khia to utilize his taser. Not only was he too far away, but it was something the officer had to think about really fast. Jenkins asked Bonner if she received any injury or cut to her skin. Bonner stated her skin was not broken, but she did feel the knife edge two times. Jenkins asked Bonner if she was ever in fear for her safety. Bonner said she was more shocked of the fact Ma’khia had a knife, because they know each other personally. Bonner also advised Jenkins she is very thankful for not being hurt or killed. Bonner considered herself as an innocent bystander and said the officer saved her life or kept her from being injured. 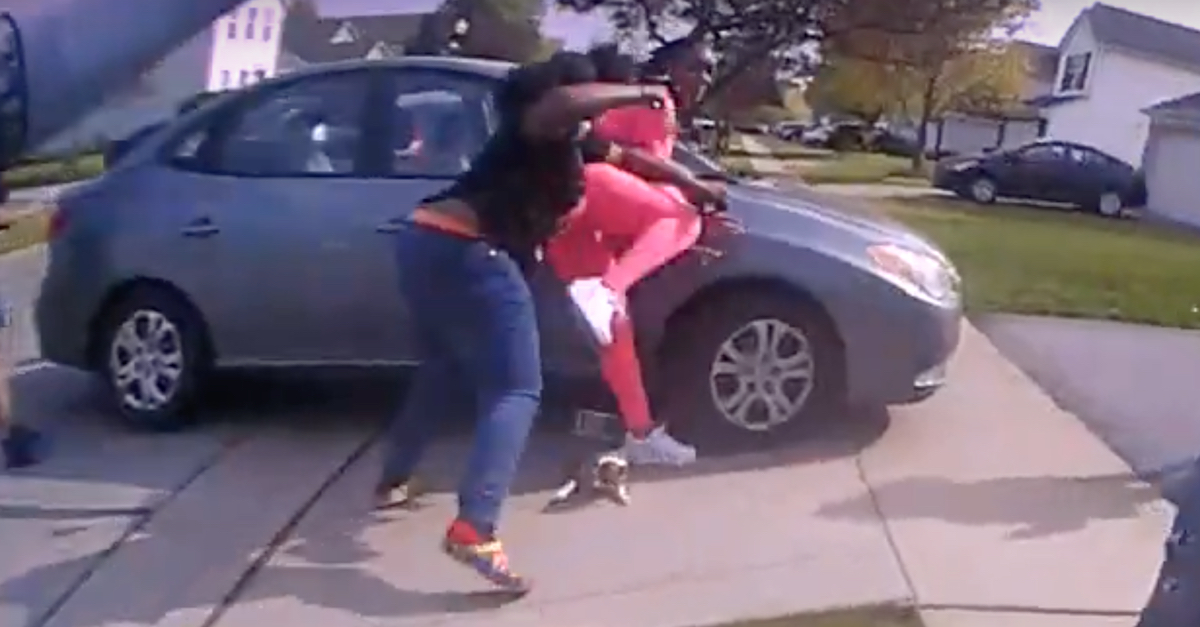 Bryant’s sister told the BCI that Bonner told the other foster girls to clean up the foster home, that an “argument started,” and that “at some point, Ma’Khia put a knife in her back pocket for protection.”  After that, she said Bonner also armed herself with a knife.

The sister also corroborated that Ma’Khia “went after” Bonner’s friend with a knife, according to the BCI paperwork.  The sister “said she saw Bonner run toward Ma’Khia,” and “that’s when Ma’Khia turned her attention away from [the friend] and now toward Bonner with a knife in hand near the car in the driveway.”

That’s when the sister said the police officer pulled the trigger.

The sister was blunt when asked about Ma’Khia’s intentions toward Bonner.

“[Y]eah, she would have stabbed her,” the sister told the BCI. 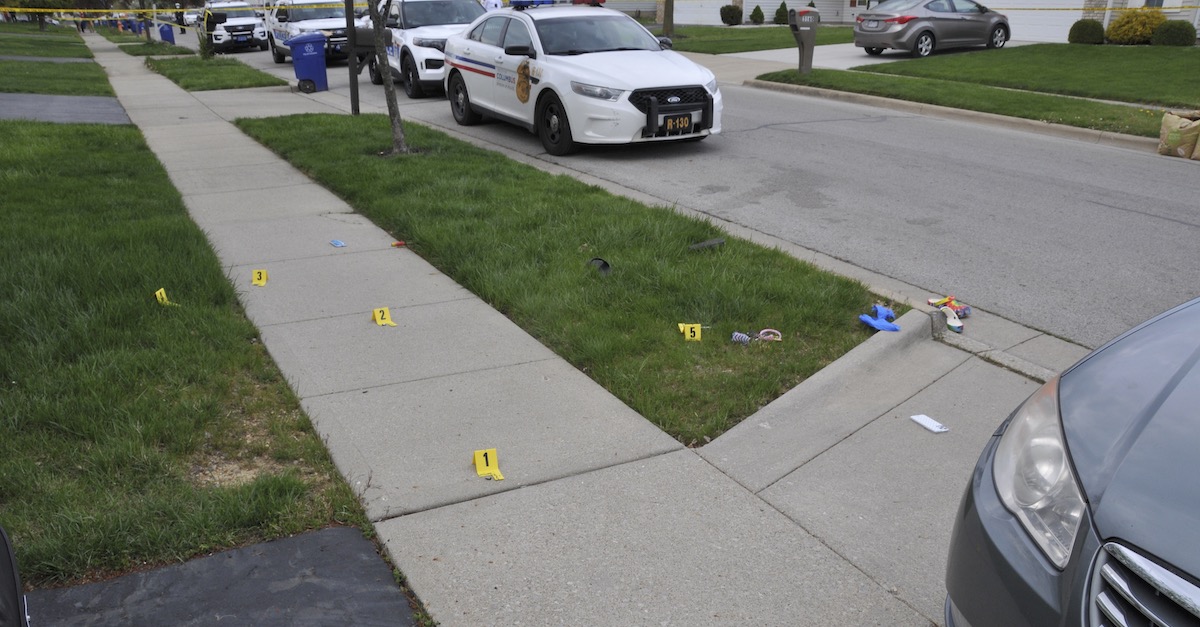 A BCI photo shows an overview of the Ma’Khia Bryant shooting scene.

Myron Hammonds, Ma’Khia’s father, told the BCI that he believed Bonner was an aggressor who had been flying “off the handle” — so he decided to get “smart” with her.

“You know how it goes, back and forth with an argument,” Hammonds told the BCI, again according to records released Friday.  “But it seemed like the moment was de-escalating.”

Hammonds said Bonner was subjecting the others to “peer pressure.”

When the girl fell down, I’m still standin’ over-top of ‘em, like tryin’ ta- ta deliberate, to make- let and the police let ‘em know, hey look, these are kids and this is not really like as bad as it seems. Like somebody could probably tase one of em, hurt ‘em and get em outta here but—No, never did I think in a million years that he was gonna pull the gun out. Anyway on a simple dispute where he wasn’t even at threatened. Like they were fighting each other. I mean I could a seen him sayin’, ‘My life was at threatened.’ Somebody was comin’ at you with a knife, then hell yeah, pull it, shoot it, cause that’s your job and you gotta protect yourself. But as you—if you can de-escalate like two people that’s actually fightin’, one em—My daughter had her back turn towards him. So, by that time all he had to do was, tase from the back and she simply woulda dropped and dropped the knife.

Hammonds suggested that “some kind of a repercussion” should have followed — presumably for the officer who fired his service weapon.  He continued by suggesting that Ma’Khia was justified — even though he admitted his daughter’s knife “could” have “hurt somebody”:

You’re dealin’ with a child so, you have to have some kind a repercussion. She’s got a knife, of course it could hurt somebody, but at the same—at the end of the day it was only because the girl was still comin’ towards her. Still tryin to fight her and her, and her little perimeter.

Hammonds also said “the police snuck up” on Ma’Khia and asserted that Ma’Khia was blindsided by the officer.  He also indicated that the officer should have used a taser.

“If she had seen the police, she know that hey, this shit’s over now,” Hammonds said, again according to his BCI interview.  “Uh, the, the next go is to jail, or somebody could get hurt. So if she would’ve known it was the police, she woulda never did it.”

Bryant died at an area hospital; an autopsy revealed that Reardon shot her four times. 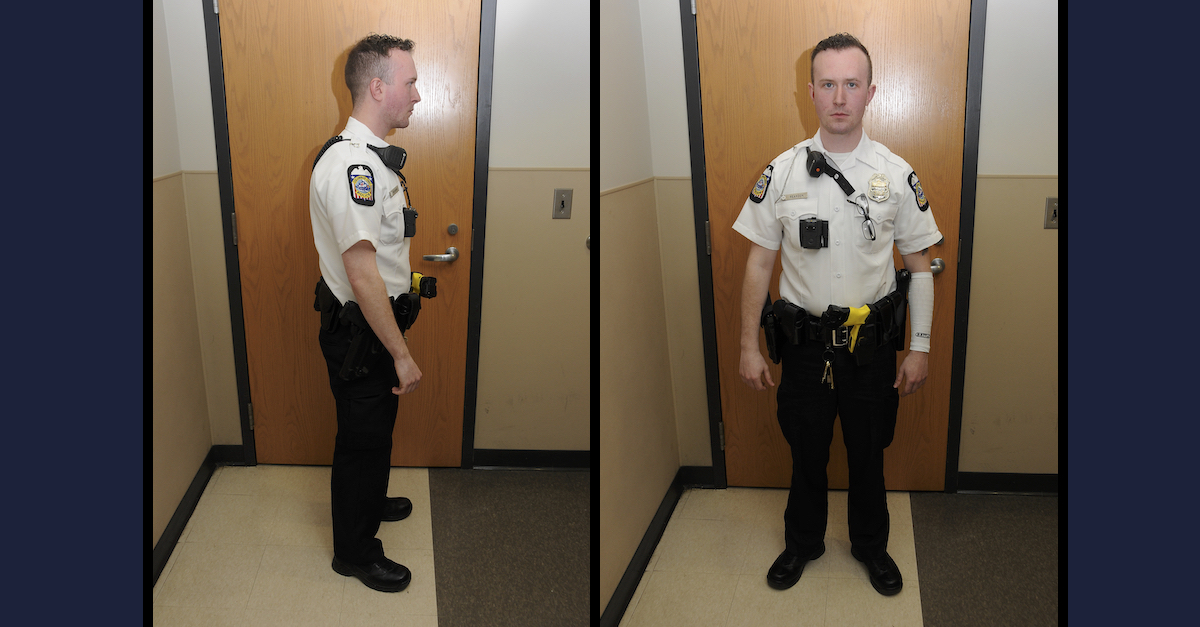 Reardon, who described himself as 5’ 5” tall and weighing 12o pounds, said he didn’t have time to use less lethal force.

“Mace was not used because uh that was, in my belief, would have been an ineffective tool, uh because she had a deadly weapon,” Reardon told BCI agents.  “And she was facing away from me.”

Readon also said he didn’t have the time to de-escalate the situation.

“Because she is actively trying to use a knife, a deadly weapon, um, and that would’ve brought myself into the fold as being exposed to the knife as well as who was already being exposed at the time to the knife,” Reardon said.  “I was also, didn’t immediately have any other officers around me. I was by myself.”

Videos released by the office of Ohio Attorney General Dave Yost showed the incident — and what led up to it — from multiple angles. Reardon fired less than fifteen seconds after he exited his squad car, his body camera video of the incident revealed.  The video indicated he repeatedly yelled “hey, what’s going on?” and “hey, hey, hey; get down; get down, get down!” before pulling the trigger.  The video suggests Reardon was immediately in Bryant’s field of view — she was facing him — for a split second before Bryant pivoted toward Bonner and then swung the knife.

The scene was chaotic, and it continued to devolve into even more chaos.

A man immediately started screaming that Reardon was “stupid” for having shot his “baby.”

“She had a knife; she just went at her,” Reardon responded, referencing Bryant’s swing toward Bonner.

“She’s a fucking kid, man!  Damn, are you stupid!  A fucking kid?” the man responded.

Reardon and other officers immediately tended to Bryant, the video indicated.

“She came at her with a knife,” Reardon responded when challenged by others at the scene.

A bystander was captured on the recording accusing Reardon of shooting Bryant “for nothing.”  That same person accused Reardon of having no right to fire in self-defense of Bonner and further tried to assert to other responding officers that Reardon “just got out of the car and shot.”

Yost released the entire investigative file in the case amassed by the Bureau of Criminal Investigation after the grand jury returned “no bill” against Reardon.

“BCI was called to do a thorough, independent investigation of the facts,” Yost said in a press release. “I’ve asked for patience while promising transparency, and now is the appropriate time for that work to be made public.”

The shooting happened near 3171 Legion Lane in Columbus, Yost’s office said.  The Columbus Division of Police asked the state’s BCI to investigate the matter.

BCI agents turned the file over to the Franklin County Prosecuting Attorney on July 7, 2021.  That office in turn handed it over to special prosecutors due to a conflict of interest, the Columbus Dispatch reported.

“It’s unfortunate when anyone loses their life, but the officer saved lives that day and did what he was trained to do,” Simpson said, per the Dispatch.

Read some of the police interviews below.  The rest are all online here.

[All images via BCI files and BCI video screengrabs by way of the Ohio Attorney General’s Office.]