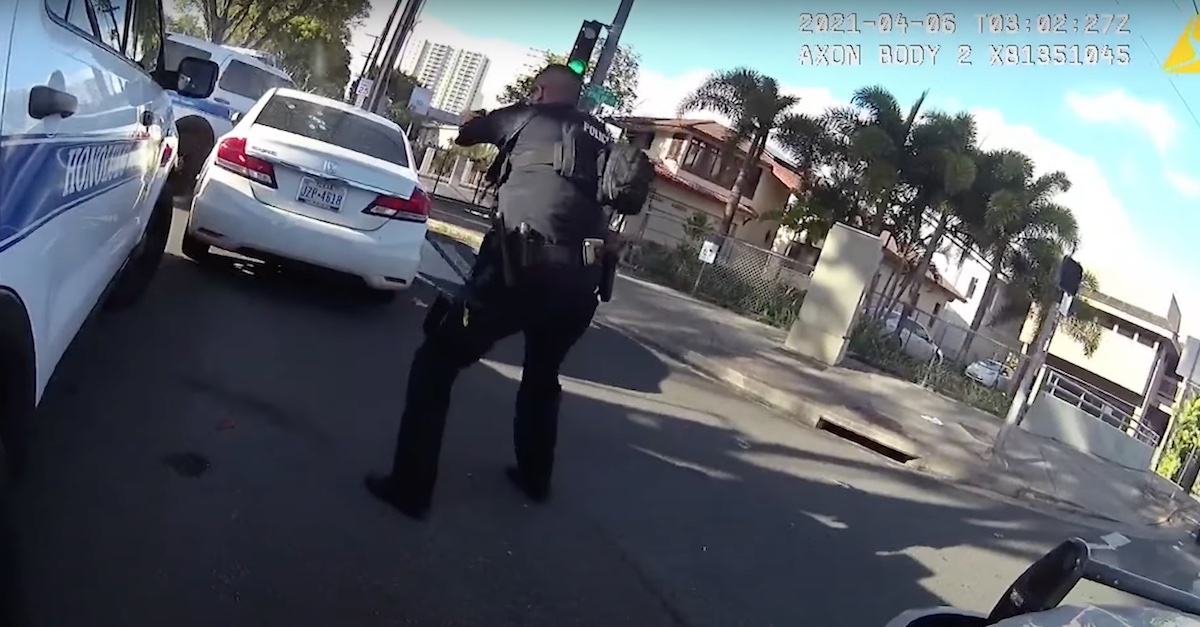 Body camera footage shows three Hawaii police officers opening fire on a vehicle after a police chase. One occupant was injured; the other, the driver, died.

According to court records, Judge William Domingo threw out all charges against Geoffrey H. L. Thom, 42, and Christopher J. Fredeluces, 40. The dismissal occurred after a preliminary hearing and was made with prejudice — meaning prosecutors cannot refile the case at a later date.

The “Court found that based on the evidence provided there is no probable cause and case dismissed,” a brief entry in the case docket reveals. 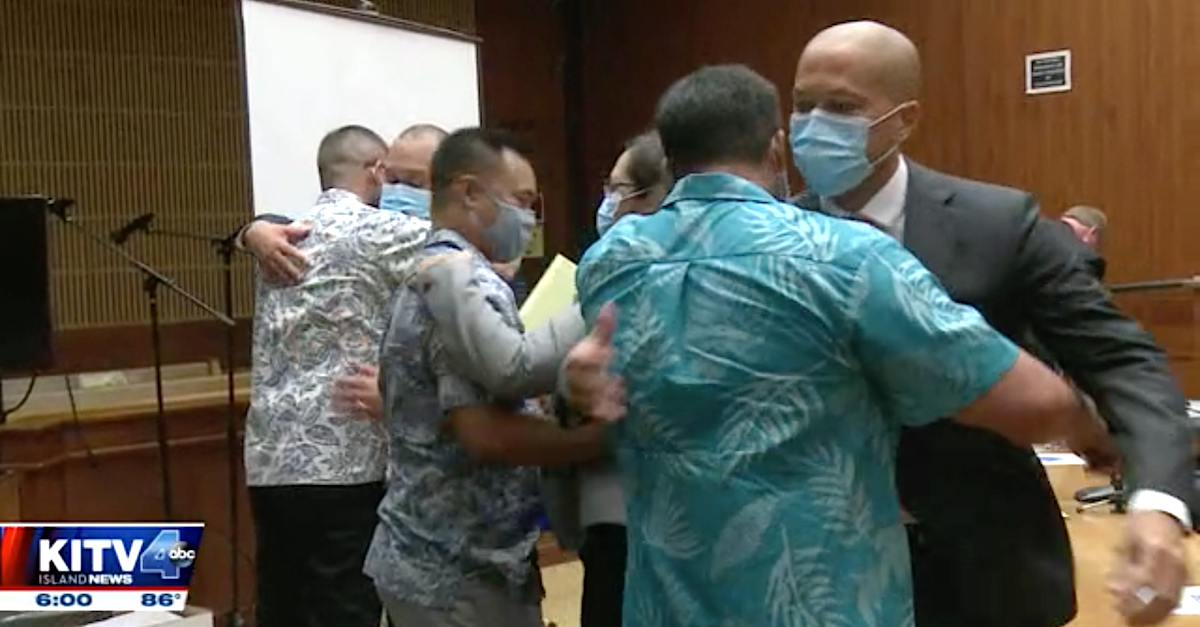 Geoffrey Thom, Christopher Fredeluces, and Zackary Ah Nee hugged their attorneys after a judge ruled that there was no probable cause to try them. (Image via KITV screengrab.)

The preliminary hearings included witness testimony from both the state and the defense. Among the defense evidence offered were copies of the Honolulu Police Department’s Policy on the Use of Force, the court docket states. 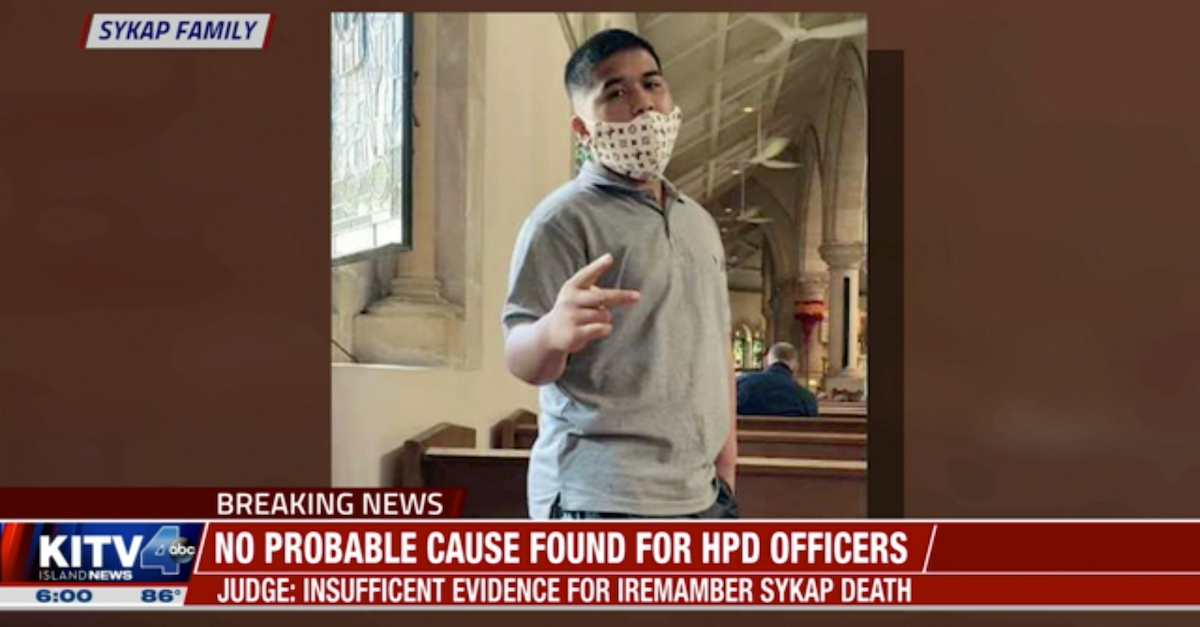 Iremamber Sykap appears in a photo provided to KITV television.

Ah Nee was separately charged with shooting “a firearm multiple times, including firing a round through the back of the headrest where Mark Sykap [the dead teen’s brother] was seated in a car and by shooting Mark Sykap in the right shoulder.” Mark Sykap survived and is charged with first-degree robbery in an underlying incident.

The shootings occurred April 5, 2021. According to the complaints, Fredeluces was driving a marked patrol car; Thom was the passenger. The pair responded to a call of a stolen car at Kawaikui Beach Park which was believed to have been involved with “several offenses, including an armed robbery, a purse snatching, and a theft.”

According to the complaint, the officers arrived to see the vehicle fleeing from the park. A pursuit ensued starting at 4:52 p.m. The fleeing car, a white Honda sedan, did not stop when the officers activated their lights and sirens and made concomitant announcements over a loudspeaker which ordered the car to stop. The pursuit proceeded to a freeway and subsequently continued onto side streets. Officers surrounded the car with guns drawn. The white Honda and a squad car bumped into one another, but the complaint says it was “not clear whether either car deliberately hit the other” or whether the “contact” was “just by happenstance.” The charging document says the impact caused only a few minor “scuffmarks” and “paint nicks” that were “about the size of two quarters.” Passengers in the back of the white Honda ran from the area.

As Thom exited his patrol car, “an AR-15 rifle fell to the ground.” Thom picked it up and put it back in his squad car. Fredeluces approached the Honda with his firearm drawn while giving commands to the occupants to “get out of the car.” Thom pulled a 9mm Glock as Ah Nee ran to the passenger side of the white Honda. “Ah Nee had his firearm drawn and was pointing it at the interior of the car,” the complaint continues; Ah Nee tried to open the Honda’s front passenger door. It was locked. Two people were still inside.

A fourth officer, listed in the complaint as Officer Price, “drew her firearm but did not discharge it.”

The complaint continued on to explain in detail the victims’ injuries. An image embedded within the document shows the trajectories of some, but not all, of the bullets fired by Thom. 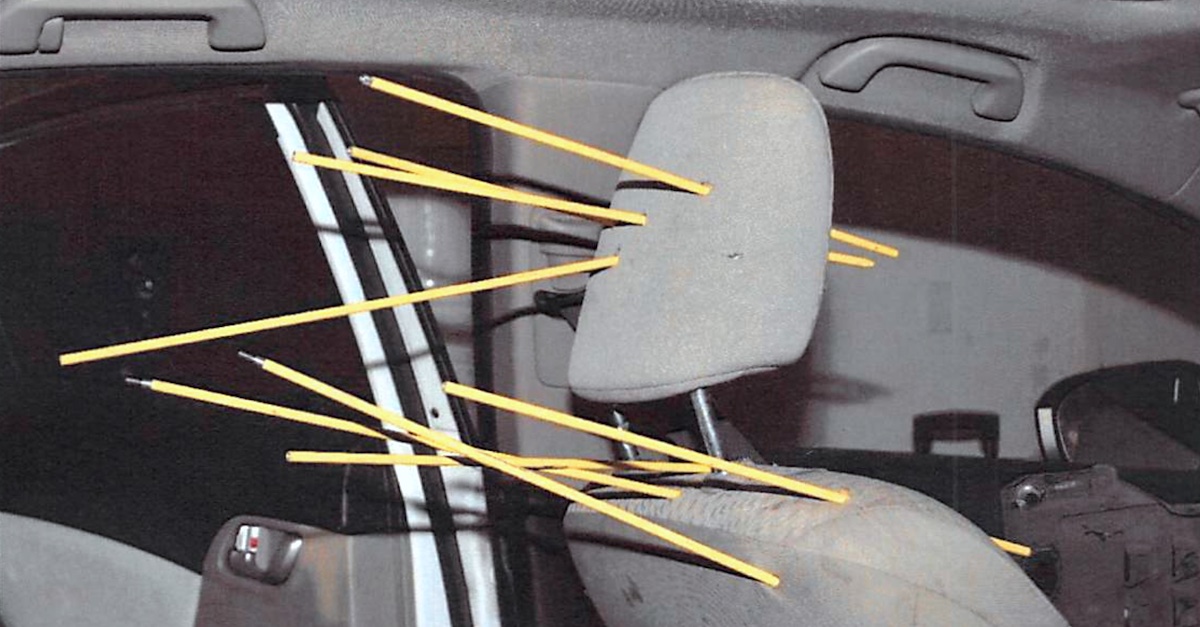 Another image from the court papers shows the bullet fired by Fredeluces. 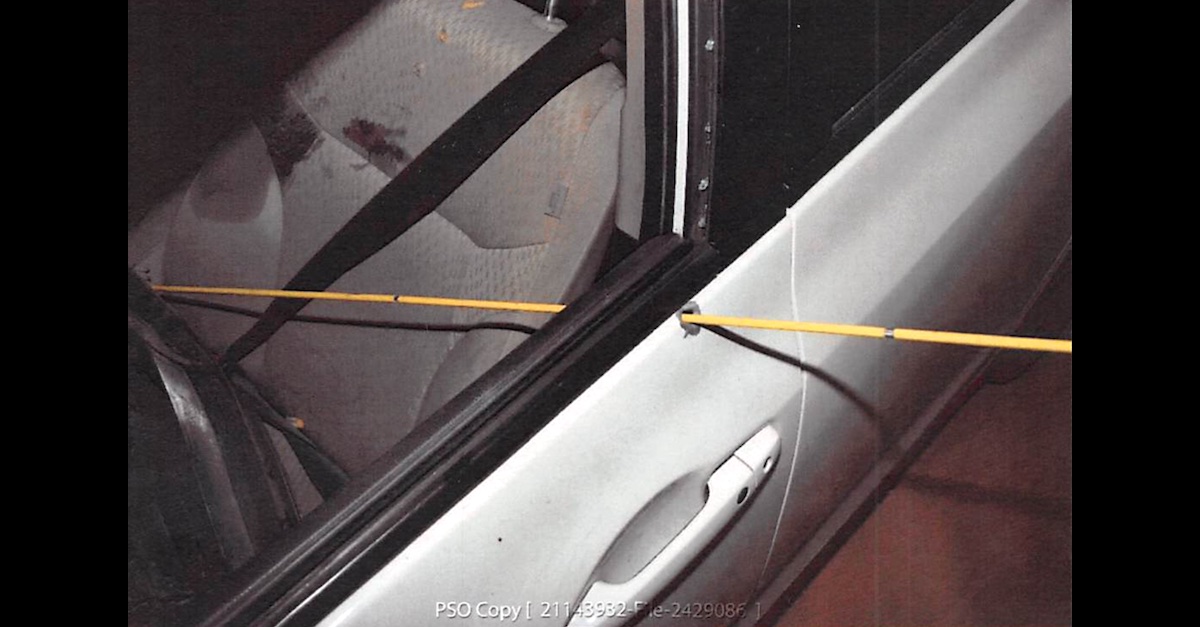 The white Honda, which was not moving when officers opened fire, started to move; Ah Nee then fired four bullets “without provocation,” the complaint alleged. Prosecutors described one the bullets as a “head shot.” Here are the images of the trajectory rod analysis of Ah Nee’s shots: 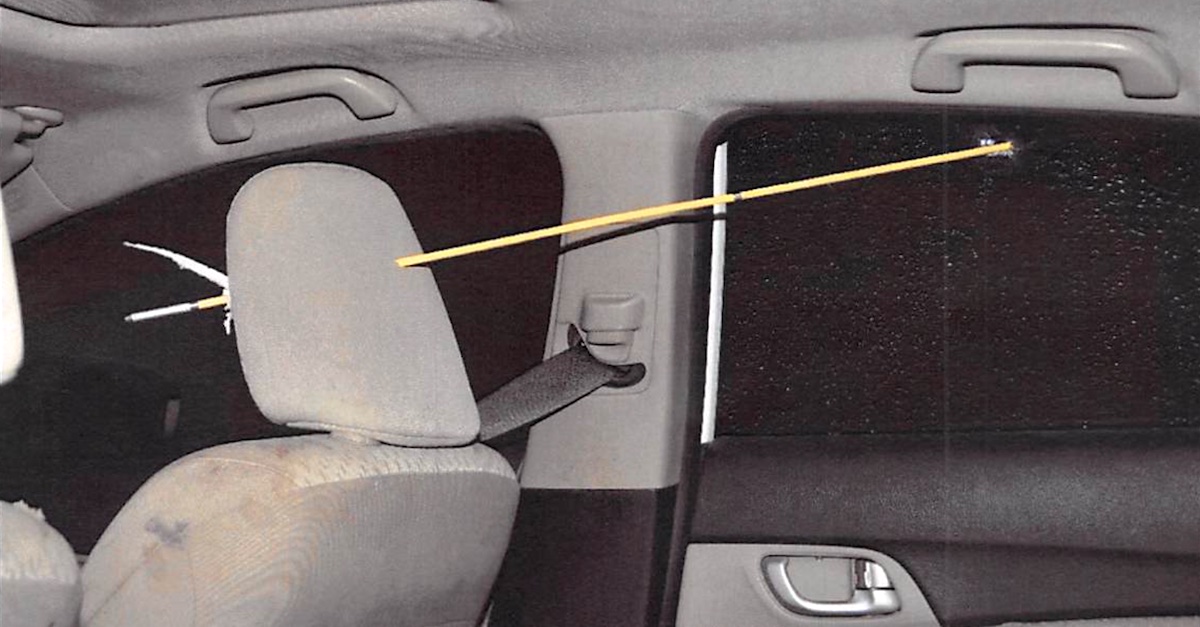 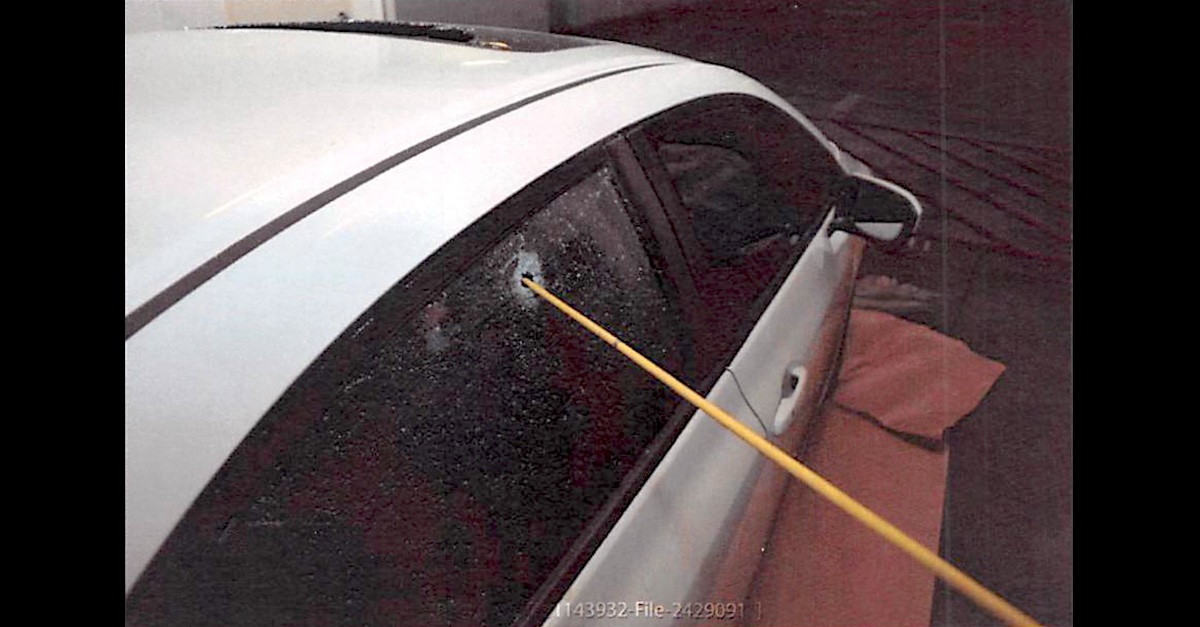 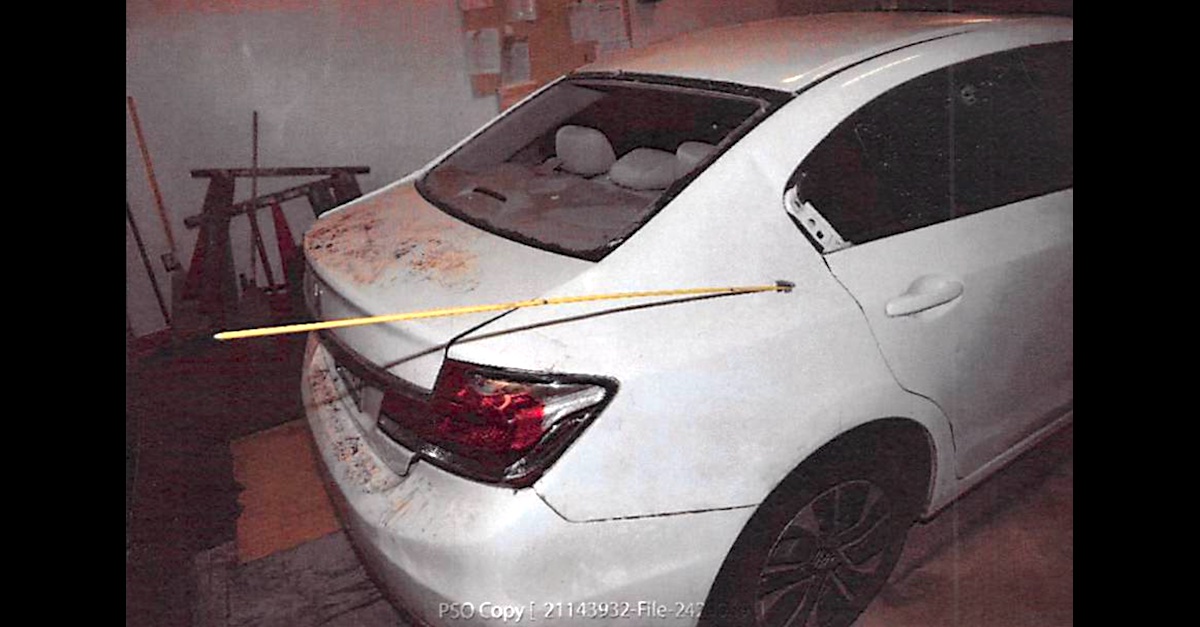 The car came to rest in a canal.

Iremamber Sykap died at the hospital; his brother, as noted, survived gunshots to both his right shoulder and his left hand.

According to the complaint, Thom wrote in a subsequent police report that he fired to “protect himself, his fellow officers, and members of the public.” Prosecutors obviously disagreed with his assessment of the situation, as their subsequent criminal complaint indicates:

And as to Fredeluces, prosecutors observed as follows:

Defendant Fredeluces wrote in his report that he heard gunshots, saw the driver’s window shatter, and believed that the shots were coming from within the vehicle and that they were being fired by occupants of the white Honda.  However, before confirming his belief, he fired his 9mm Glock firearm into the driver’s door.  That bullet went through the driver’s door, entered the interior of the vehicle, but apparently, did not strike Iremamber Sykap.

And as to Ah Nee:

Defendnat Ah Nee wrote in his report that he saw what he thought was the butt of a firearm on the lap of the front seat passenger.  That is not seen on the BWC video.  In fact, from the BWC video, it appears that the passenger has a thin square object on his lap, which does not resemble a firearm.  The passenger is seen holding a cell phone in his right hand.  His left hand is empty.  His left hand sustained a gunshot wound.  Defendant Ah Nee wrote in his report that he heard gunshots, and he fired his firearm at the vehicle, allegedly to protect himself, other officers, and members of the public.  However, the BWC videos show that he fired after the first volley from Defendants Thom and Fredeluces, and after the vehicle was going up on the sidewalk and through the fence.  No person was in any danger when he fired his firearm.  Two rounds his the front seat passenger.

The judge disagreed with the prosecutor’s office’s assessment of the matter.

Judge Domingo blamed the suspects inside the white Honda, according to reports from NBC News and form The Associated Press.

“If there was no pursuit in the beginning, and there were just people in the car and officers just came up and started shooting from behind without any type of provocation — but that’s not what we have here,” Domingo said, according to those reports.

“The reasonable person would think, well, you know, is it over? And it’s not over at that point,” Domingo continued, again according to the reports.

“[T]he car started moving again, putting the officers in danger, and that’s when Thom fired his weapon,” NBC said in a paraphrase of the judge’s ruling. 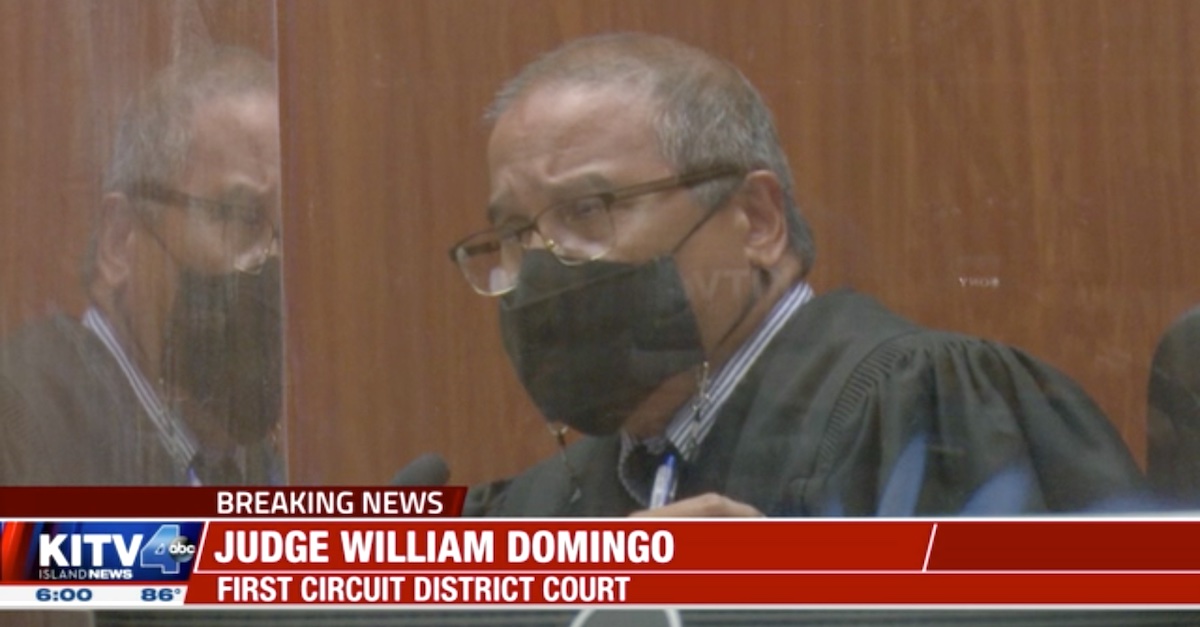 Judge William Domingo announces his ruling in a KITV screengrab.

“We’re talking about taking a person’s life with a gun. A government employee. He’s supposed to be disciplined, exercise restraint, only do something if necessary,” Deputy Prosecuting Attorney Christopher Van Marter said, again per NBC. Van Marter said Thom had no reason “to start blasting 10 rounds into that car.”

“We are pleased with today’s decision. This has been challenging for our officers, the department and many in our community,” acting Honolulu Police Chief Rade K. Vanic told the Honolulu Star Advertiser. “Throughout this time, our officers have continued to serve with pride and professionalism. I thank the HPD ohana for their support.”

“We are pleased that for a second time, the legal system has ruled in favor of these officers,” police union president Malcolm Lutu told Honolulu ABC affiliate KITV.  “Today isn’t a day of celebration, rather, it proves that the officers’ decision making was justified. It does not take away from the tragedy of what happened and the impact that it has on many families.”

Lutu was referring to a grand jury’s decision to return no bill against the officers. Prosecutors pressed forward with the case anyway.