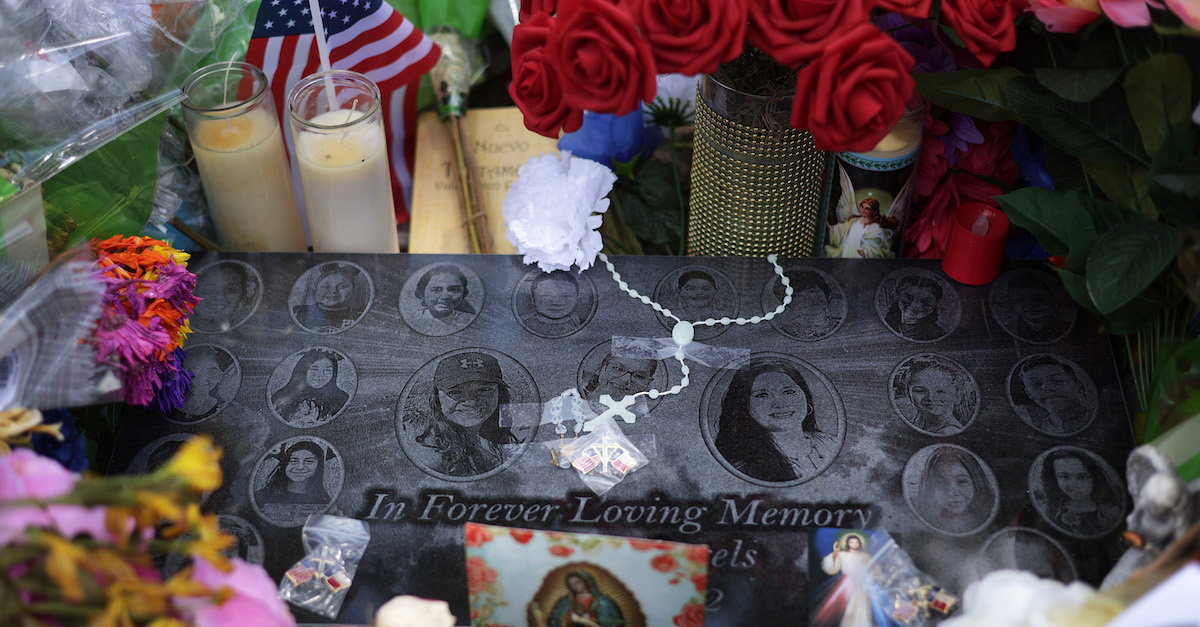 Flowers and photographs are placed at a memorial dedicated to the victims of the mass shooting at Robb Elementary School on June 3, 2022 in Uvalde, Texas. 19 students and two teachers were killed on May 24 after an 18-year-old gunman opened fire inside the school. (Photo by Alex Wong/Getty Images)

The first 911 call from Robb Elementary School in Uvalde, Texas came at 12:03 p.m. on May 24. Seventy-eight minutes later, a U.S. Border Patrol tactical team killed the 18-year-old gunman, who had by that time killed 19 children and two adults.

According to The New York Times, a teacher, Eva Mireles, spoke to her husband, a school district police officer in Uvalde, while she was barricaded with her students in a classroom. Mireles was killed sometime after that call.

As America collectively shook its head, the obvious question was—why would law enforcement wait 78 minutes to enter the building? The next question— as Americans reach for the proverbial torch and pitchfork: Can the police be held accountable criminally, or civilly, for their inaction?

As the police department, police chief and school district continue to revise, amend and disavow their original versions of what happened outside of Robb Elementary School on that fateful day, we may never truly know why the police did not immediately enter the building. We know that Uvalde School District’s policy with regard to active shooters, and the state of Texas policy, were very similar. Their training had units entitled “stop the dying” and “stop the killing”—neither of which happened for 78 minutes.

That brings us to the second question, accountability. The school police in Uvalde will not face criminal or civil liability for failing to confront the shooter who killed 19 students and two teachers. Most people would be surprised to know that the government is not required to protect its citizens—the U.S. Supreme Court has said as much.

The lack of accountability is not unique to Texas. The result would probably no different in Pennsylvania and probably every other state in the union.

Experts who spoke to The New York Times said a negligent homicide charge would revolve around whether the officers had a duty to act in that moment and whether the failure to do so amounted to deliberate indifference. The Texas penal code says criminal negligence results when a person “ought to be aware of a substantial and unjustifiable risk that the circumstances exist or the result will occur.”

Uvalde school district’s police force had recently gone through active shooter training. The Texas Commission on Law Enforcement training “Active Shooter Responses for School Base Law Enforcement” warns participants that “first responders to the active shooter scene will usually be required to place themselves in harm’s way and display uncommon acts of courage to save the innocent.”

Initially, some law enforcement officers attempted to confront the shooter but were wounded. At that point the chief of police ordered down the officers on scene. Apparently, the police command decided to pursue a different tactic. More than an hour passed before a second, and successful, confrontation with the shooter occurred.

The U.S. Supreme Court has said that “Qualified immunity balances two important interests — the need to hold public officials accountable when they exercise power irresponsibly and the need to shield officials from harassment, distraction, and liability when they perform their duties reasonably.”

The discretionary function in the Uvalde shooting was: “Is this an active shooter or a barricaded assailant?”

The U.S. Supreme Court has held that the government has no duty to act to save innocent lives. In 1989, the Supreme Court reviewed a case brought against a Wisconsin child welfare agency by the family of a child beaten so severely he would remain institutionalized for the rest of his life.

The suit was brought under Section 1983 of the Civil Rights Act—the federal statute that allows a claimant to sue state and local officials in federal court for violating federal constitutional rights—alleging the child welfare agency failed to intervene to protect the child.

The lawsuit alleged that the failure to act deprived the child of his liberty in violation of the 14th Amendment’s due process clause. The Supreme Court disagreed.

“Nothing in the language of the due process clause itself requires the state to protect the life, liberty and property of its citizens against invasion by private actors,” the high court found.

The officers made no effort to locate or arrest Gonzales’ ex-husband. He later showed up at the police station and engaged in a gun fight with police resulting in his death. Tragically, the police found the three children murdered and thrown in the trunk of the ex-husband’s car.

Gonzales also sued the police department under Section 1983. She argued that the Colorado legislature had made enforcement of the restraining orders mandatory and that, as a result, the police had violated the Due Process Clause by not carrying it out.

Again, the Supreme Court disagreed. Justice Antonin Scalia wrote “were a mandate for enforcement to exist, it would not create an individual right to enforcement.”

The Uvalde School District itself will be insulated from liability through the doctrine of sovereign immunity. Other than the scrutiny of a U.S. Justice Department investigation and an investigation by the Texas legislature, there does not appear to be any clear path to accountability in Uvalde, Texas.

This column first appeared in the Pennsylvania Capital-Star on June 8, 2022.