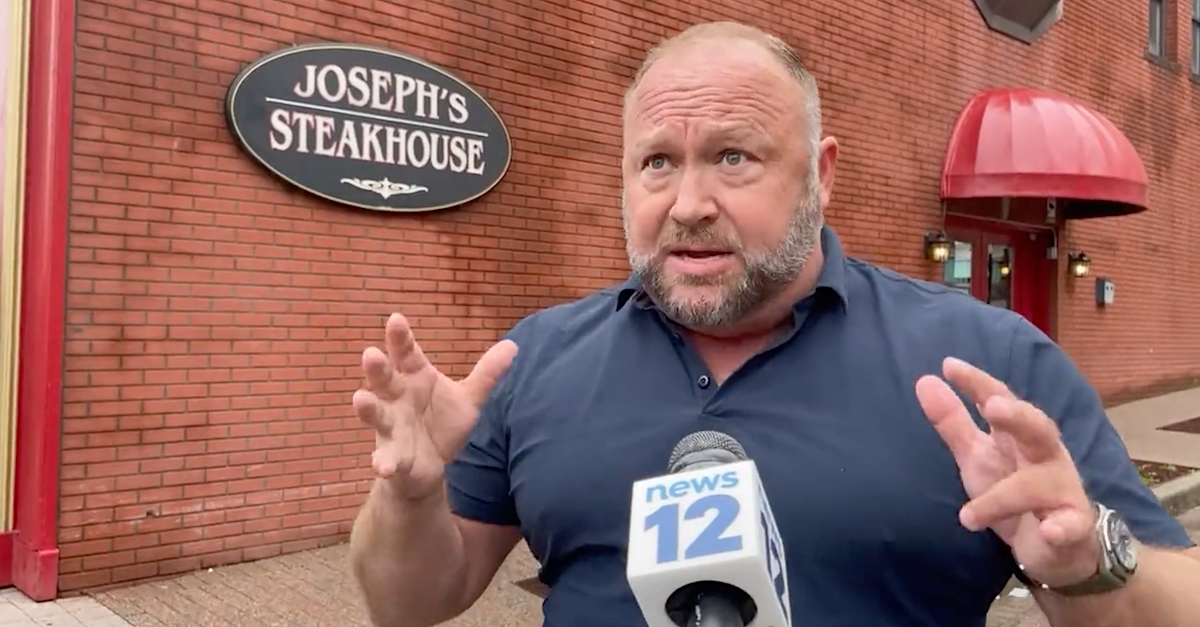 Alex Jones spoke to a local reporter from News12 Connecticut while on an apparent lunch break during a multi-day deposition in Bridgeport, Conn., on April 6, 2022.

Families of Sandy Hook victims asked the court to sanction InfoWars founder Alex Jones for his “bad faith” efforts to avoid contempt findings through bankruptcy proceedings from Connecticut to Texas.

“Alex Jones’s abuse of the judicial process literally knows no bounds – not content to waste this Court’s time and ignore this Court’s rulings, Jones expanded his bad faith abuse of process to bankruptcy, in both the United States Bankruptcy Court for the District of Connecticut and the United States Bankruptcy Court for the Southern District of Texas,” their attorney Alinor C. Sterling wrote in a 10-page motion for sanctions on Wednesday. “Due to the plaintiffs’ extreme efforts, that abuse has ended. It falls to this Court to levy sanctions on Mr. Jones for this continued misconduct.”

More than 150 pages of exhibits are attached to the filing, showing the sprawling litigation.

On March 30, Judge Barbara Bellis held Jones in contempt and issued a $25,000 per day fine until the right-wing radio jock sat for depositions.

The Sandy Hook families sued Jones for his conspiracy theory that the shootings that killed 26 people inside the elementary school—plus the gunman and his mother—did not happen. After winning a default judgment against him, the families are set to take Jones to a damages trial later this year. Jury selection will commence on the morning of Aug. 2, and the panel will start seeing the evidence on Sept. 6 at 10 a.m. Eastern Time.

Judge Bellis also made clear that the trial date was “firm” and the parties “should plan accordingly.”

“Alex Jones did plan accordingly,” Tuesday’s sanctions motion notes. “He responded by having assetless, functionless shell companies he controls file ‘reorganization’ bankruptcy petitions in the United States Bankruptcy Court for the Southern District of Texas. Those petitions were, in the words of the United States Trustee for Region 7, ‘classic bad faith filings’ that ‘serve no valid bankruptcy purpose and were filed to gain a tactical advantage in the Sandy Hook Lawsuits.'”

“The shell companies then removed this action to the United States Bankruptcy Court for District of Connecticut based on the supposed removal jurisdiction created by the bad faith Texas bankruptcy filing,” the motion continues. “The tactical advantage sought was the exact same tactical advantage Mr. Jones has sought in this case: disruption and delay of the plaintiffs’ cases and interference with their rights to proceed to trial through abuse of the judicial process. ”

The families want Jones to compensate them for the fees and costs associated with what they describe as three “bad faith” removals to federal court on behalf of his companies Infowars, LLC, Infowars Health, LLC, and Prison Planet TV, LLC.

“The United States trustee took the highly unusual step of twice submitting filings in the Texas bankruptcy objecting to the proceedings,” the motion states. “The U.S. Trustee described the bankruptcy as ‘an abuse of the bankruptcy system’ and a ‘scheme of avoiding the burdens of the bankruptcy while reaping its benefits.'”

“Koskoff agreed to a dismissal of its claims against these entities,” he wrote. “Jones is supposed to pay Koskoff for dismissing claims that should not have brought in the first instance? Only in the Sandy Hook cases does logic get bent beyond recognition in the name of sympathy.”

Jones, his client, spread claims that “crisis actors” faked the massacre, before backtracking in a deposition. The conspiracy theorist blamed his Sandy Hook misinformation on “a form of psychosis back in the past where I basically thought everything was staged, even though I’m now learning a lot of times things aren’t staged.”

Read the sanctions motion below: