Kavanaugh: No Tax Break for Religious Scholarships Is ‘Grotesque Religious Bigotry Against Catholics’ 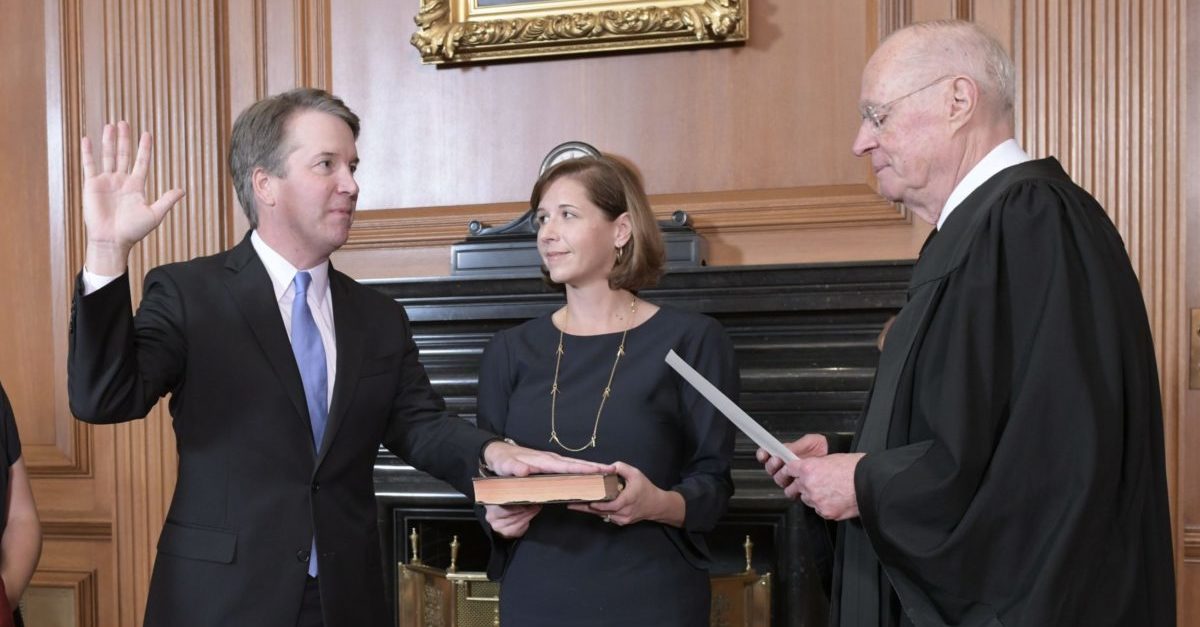 Well, the 2019 “War on Christmas” is over, so it’s time for the January 2020 version of disingenuous claims of religious persecution.  Supreme Court Justices Samuel Alito and Brett Kavanaugh are here to deliver.

The Supreme Court of the United States heard oral arguments Wednesday in Espinoza v. Montana Department of Revenue — a momentous case addressing the relationship between religious institutions and government funding. The specific issue at hand is whether a state can be forced to use taxpayer money to fund religious schools.

I know. You thought you knew the answer to that based on your middle-school civics class which taught all that “separation of church and state” business. But this is the year 2020, not to be confused with 20/20 vision, where we can’t tell whether the letter “E” is up, down, left, right, or all of the above; where certain ‘trials’ do not involve witnesses, and where “separation” means “subsidize.”

It, in turn, passed a rule that prohibited families from redeeming scholarship tax credits for gifts to religious schools, explaining that state constitution bans state aid for religious schools. Here’s where things got really weird. When the Montana Supreme Court ruled that the tax credit scheme was unlawful, it didn’t carve out portions of the program. Instead, it simply threw out the entire program.

Single mom Kendra Espinoza, along with two other Montana mothers, sued the state, arguing that they’d been “counting on” the scholarship money to able to keep their children in a Christian school. That’s right. They’re suing — not because they were discriminated against, or even because Christian schools were excluded — but because the entire program was shut down. They expected scholarships, and by God, they should have them. [Sidebar: the lawsuit is brought on their behalf by Institute for Justice, a libertarian group gleefully congratulating itself for saving Espinoza from auctioning more handmade quilts to pay tuition the Gileadesque Stillwater School.]

According to the mothers, excluding religious schools from the scholarship program would violate the United States Constitution. I guess the common mom logic of “if you can’t be fair about who gets it, then no one gets it” is simply not working for them.

If it seems a little weird to you that these parents could potentially win a lawsuit over not getting free money to use at a religious school, you’re not alone. Justices Elena Kagan, Ruth Bader Ginsburg, and Sonia Sotomayor were there to point out some of the major flaws in the petitioners’ arguments.

Kagan pointed out that those families with children in religious schools and those in secular schools are “in the same boat.”  That’s because without the program neither group is getting scholarships offset by tax writeoffs.  Accordingly, she asked — almost rhetorically — “there is no discrimination at this point going on, is there?”

Ginsburg offered a reality check on the issue of standing. “These parents are treated no differently than parents of children who are going to secular private schools, so where is the harm?” she asked.

While she was at it, RBG brought up what she called “another serious problem” with the case.  Even if there is a problem with Montana’s rule, these plaintiffs are hardly the right people to bring a lawsuit. Ginsburg said:

“The parents are not taxpayers. Taxpayers are the people who contribute to these student scholarship organizations. And this Court has held that there is no standing to challenge somebody else’s tax status.”

Espinoza and the other parents aren’t looking for tax credits – they’re hoping to become third-party beneficiaries of other Montanans’ tax-advantageous donations. Justice Sotomayor called that relationship “three levels removed” from the tax/scholarship program at the center of the case.

Overwhelmingly solid as the arguments against the petitioners’ standing are, there was no way SCOTUS was going to get out of oral arguments Wednesday without someone raising the war on religion. That someone, not shockingly, turned out to be Justice Kavanaugh.

In response to Adam Unikowsky’s argument on behalf of Montana that the state has a “principled objection to funding of religious institutions,” Kavanaugh shot back that such policies are “certainly rooted in — in grotesque religious bigotry against Catholics.”

Justice Kagan was there to obliquely call bullshit on that Kavanaugh’s take, stating:

Justice Alito jumped in with his best false-equivalency when he likened Montana’s decision to nix the program to a state’s shutting down a scholarship program because funds were primarily supporting black students. “If that’s unconstitutional — and it surely is” he asked, “isn’t it also unconstitutional to shut down a program because money went to religious schools?”

Justice Stephen Breyer was on hand to remind everyone that while race and religion do intersect under the law when it comes to discrimination, the Constitution has a whole other set of rules relevant only to religion:

Bottom line: the Espinoza ruling will likely rest on Chief Justice John Roberts – who, for the time being, is — eh — otherwise engaged. It is yet unclear whether he’ll emerge from his new gig ready to reimagine the First Amendment as a federal mandate that religions — especially Kavanaugh-grade Catholicism — get a seat at every state-funded table.