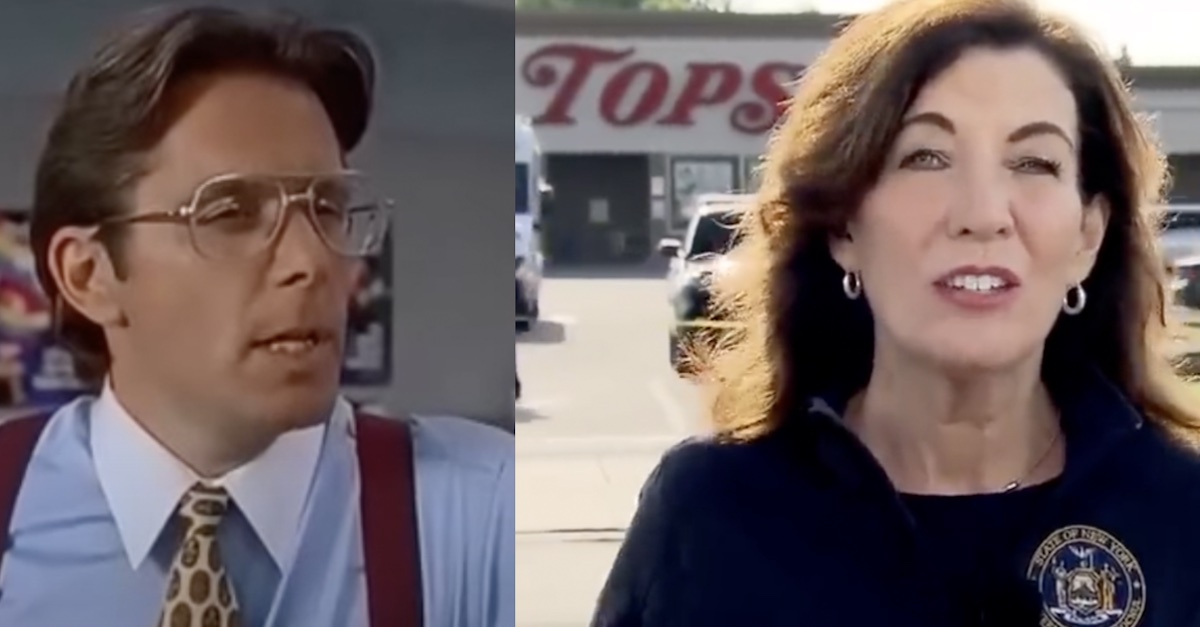 If New York Governor Kathy Hochul (D) could go ahead and read up on the First Amendment, that would be great.

In the video below, Hochul can be seen in an interview with ABC’s George Stephanopoulos in which she remarked that “depraved” ideologies of white supremacy are “fermenting on social media” and “spreading like a virus.” Hochul called on tech companies to do more to monitor and shut down dangerous individuals on social media platforms. Without distinguishing between private action (such as the kind of user-monitoring Hochul was suggesting be undertaken by private companies) and government action, Hochul ended the interview by summarizing her take on government power to regulate speech.

“I’ll protect the First Amendment any day of the week,” Hochul pledged. “But you don’t protect hate speech. You don’t protect incendiary speech. You’re not allowed to scream ‘fire’ in a crowded theater. There are limitations on speech…”

“How these depraved ideas are fermenting on social media—it’s spreading like a virus now.”

Over the decades, an enormous amount of jurisprudence has developed that carves out specific rules for how the government (both local and national) may legally regulate speech. Some categories of speech have been deemed “unprotected” by the First Amendment, such as defamation and perjury. Of course, to ascertain whether a particular statement amounts to defamation or perjury (and thus loses First Amendment protection), one must engage in an independent analysis. The same is true for speech that is unprotected because it constitutes “obscenity” or “fighting words.”

When Hochul referenced the ever-misunderstood fire-in-a-theater example, she likely did so as a shorthand way of making the point that there are plenty of circumstances in which it is absolutely legal for the government to regulate and even prohibit speech. The point was accurate (though Hochul’s example is woefully bad at making it).

As an aside, my Law&Crime colleague Aaron Keller discussed the theater-fire example at length in 2021 when President Joe Biden clumsily tried to make the same point in the same way that Hochul did. Keller explained:

Biden said, in essence, that the Constitution doesn’t protect the right to “yell ‘fire’ in a crowded movie theater.” He’s wrong. People can constitutionally yell “fire” in crowded gatherings — if there is an actual fire. The often-misquoted phrase usually fails to acknowledge that key distinction.

Besides, as Keller pointed out, there have been broader jurisprudential shifts that have long ago rendered as obsolete the well-worn and tired “fire in a crowded theater” trope. The theater/fire analogy is rooted in an Oliver Wendell Holmes, Jr. line in Schenck v. U.S., a 1919 case that was mostly overturned by Brandenburg v. Ohio in 1969. The quote somehow stuck around long after the law attached to it did not.

What about “incendiary” or “hate” speech?

Brandenburg v. Ohio sets out the basic analytical framework courts use to evaluate free speech claims. Under Brandenburg, speech can be prohibited if it is both (1) “directed at inciting or producing imminent lawless action” and (2) “likely to incite or produce such action.” In other words, what matters is the risk of danger. When speech is likely to create immediate lawbreaking or immediate danger, the government may indeed step in and prohibit that speech.  This is why prohibitions against falsely alarming people in a crowded place in which a dangerous stampede may result would likely withstand constitutional scrutiny.

That said, however, proving that government action targeted only the kind of speech that would satisfy the Brandenburg requirements is not a simple matter. Rarely does speech rise to the level of being “likely to incite or produce imminent lawless action” such that restriction of that speech can withstand a First Amendment challenge. Even when it does, the regulation in question cannot be overbroad, and must instead prohibit the unprotected speech without infringing on protected speech.

Indeed, the test is very, very strict: Brandenburg held that a speech at a Ku Klux Klan rally could not result in criminal punishment because the law which criminalized the speech didn’t afford leeway for rhetoric — however unpopular — that didn’t incite or produce imminent lawless action.

“[T]he mere abstract teaching . . . of the moral propriety or even moral necessity for a resort to force and violence,” the Court wrote of the KKK speech, “is not the same as preparing a group for violent action and steeling it to such action.”  (Most of the quote actually came from an earlier case.)

Hochul used the word “incendiary,” perhaps meant to be a synonym for “incitement.” At best, the usage leads to an incomplete statement. At worst, it’s just wrong.

Merriam-Webster defines “incendiary” as “tending to excite or inflame.” While it is certainly possible that some “incendiary” speech might rise to the level of risk set out by Brandenburg, the two concepts are surely different. One could easily imagine speech that “tends to excite or inflame” that does not necessarily threaten immediate lawlessness. Thus, Hochul’s misspeak on this point creates its own standard by throwing in a legally irrelevant term and mischaracterizing one of the very narrow circumstances in which speech is unprotected.

Hochul’s use of “hate speech,” though, is a far worse legal sin.

“Hate speech” is not a legal designation with a specific definition. Rather, it is a conversational term usually meant to characterize speech that is overtly offensive, and usually refers to racist, sexist, homophobic, or anti-Semitic slurs. Many use the term “hate speech” as a kind of corollary to the term “hate crimes” (the history of which I detail at length here) — a lack of precision that often leads to a misunderstanding about the legal status of “hate speech.”

The U.S. Supreme Court has never ruled that “hate speech” constitutes a new category of unprotected speech. Some “hate speech” may be obscene, while some may incite violence; on those bases, such speech could be denied First Amendment protection. However, deeming speech as “hateful” or “hate speech” does not independently make that speech a proper target for government action.

Take the KKK speech that was the crux of the Brandenburg test:  if a piece of so-called “hate speech” does not produce or incite imminent lawless action, but rather stands on its own as a vile and loathsome thought in the marketplace of ideas, then it can’t be prosecuted.

Often, when the First Amendment is discussed in legal circles, “hate speech” is used as a primary example of the kind of speech that is loathed but still legally protected. Against that backdrop, Hochul’s declaration that she will “protect the First Amendment any day of the week,” but that “you don’t protect hate speech,” is a truly pitiful statement on the governor’s understanding of her own responsibility as an executive official.

“Hate just breeds more hate,” Hochul said. “Think of all the people who saw the livestream” of the Buffalo shooting.

“They witnessed this in real time,” she added. “The suspect wanted people to see this.”

“That is a direct threat to New Yorkers,” Hochul continued. The governor said she also made a referral to the New York Attorney General’s Office to investigate the social media platforms (see: Twitch) that “broadcasted the horrific attack in Buffalo and legitimized replacement theory.”

I’ve issued a referral to @NewYorkStateAG to investigate social media platforms that broadcasted the horrific attack in Buffalo and legitimized replacement theory.

Social media platforms must take responsibility and be held accountable for favoring engagement over public safety.

“We’re watching you now. We know what you’re up to,” Hochul said, addressing would-be domestic terrorists.

“The terror attack in Buffalo has once again revealed the depths and danger of the online forums that spread and promote hate,” James’s statement said. “The fact that an individual can post detailed plans to commit such an act of hate without consequence, and then stream it for the world to see is bone-chilling and unfathomable. As we continue to mourn and honor the lives that were stolen, we are taking serious action to investigate these companies for their roles in this attack. Time and time again, we have seen the real-world devastation that is borne of these dangerous and hateful platforms, and we are doing everything in our power to shine a spotlight on this alarming behavior and take action to ensure it never happens again.”