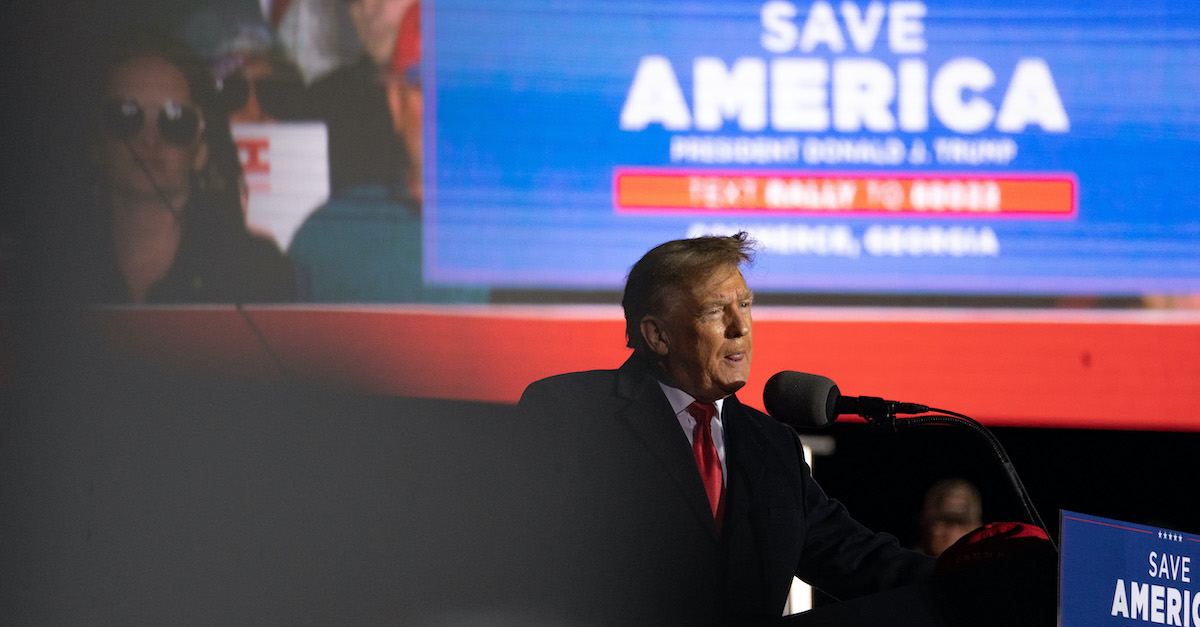 COMMERCE, GA – MARCH 26: Former U.S. President Donald Trump stands in front of a sign promoting his Save America PAC at a rally at the Banks County Dragway on March 26, 2022 in Commerce, Georgia.

Toward the end of its most recent public hearing, the Jan. 6 Committee released a roughly two-minute video laying out how former President Donald Trump and his allies raised $250 million off what they called the “big rip-off.”

According to the committee, they pitched a supposed “Official Election Defense Fund” that did not exist in order to fight bogus claims of election fraud that even Trump campaign officials knew were false.

What’s more, a top official for an anti-corruption watchdog that’s one of Trump’s staunchest critics says Trump is likely to escape any criminal or civil liability over it—at least, based on what’s currently known about it.

“It is incredibly frustrating to learn how many things are highly unethical, but probably legal, and this is probably one of them,” Robert Maguire, the research director of Citizens for Responsibility and Ethics in Washington (CREW), told Law&Crime’s podcast “Objections: with Adam Klasfeld.”

CREW filed some 180 legal complaints and actions against then-President Donald Trump after his first year in office alone.

In 2018, the non-profit group chronicled that legal blitz under the headline: “The Most Unethical Presidency: Year One.” Maguire called the committee’s revelations in line with that the organization observed throughout the Trump presidency.

“There’s one thread that runs through sort of Trumpworld, and that is a propensity for grifting,” Maguire said.

Some observers compared Trump’s post-election fundraising to We Build the Wall, the effort to crowdfund a U.S.-Mexico barrier that led to the prosecution of his ex-chief strategist Steve Bannon and three other people. Prosecutors said that they promised every penny raised would benefit the wall, but that they actually lined the pockets of Bannon and his co-horts.

Trump pardoned Bannon but not his co-defendants, two of whom—Brian Kolfage and Andrew Badolato—pleaded guilty. The first prosecution of the last defendant, Timothy Shea, ended in a mistrial, but he will be retried later this year.

Unlike We Build the Wall, however, Trump’s fundraising efforts went through a political action committee rather than a non-profit organization.

“That is a violation of the […] excessive personal benefit issues on the IRS side when it comes to non-profits,” Maguire said, referring to the We Build the Wall scheme.

Corporate structures aside, Maguire did find one commonality between the two.

Though the Department of Justice has prosecuted political action committees before, Maguire says they tend to be “low-level, scam PACs”—and there’s a reason for that.

CREW monitored the pro-Trump ads throughout the post-election cycles, and they tended to share a common feature.

“There was fine print that said, you know, ‘This is going to Save America,’ and I believe other committees,” Maguire noted. “So, they have some some information that they can fall back on as a defense. And so I think it’s going to be quite difficult to actually make that case.”

As for the possibility of civil liability, Maguire noted, that would require indignation on the part of Trump’s donors at allegedly being misled.

“In order to even get people to request their money be refunded, they have to be angry about it,” he said. “If they were doing what Trump asked them to, a lot of these people are probably okay with it. And so I think that the big question is whether you would actually have enough people to be a part of the class for that lawsuit.”

Maguire gave a grim diagnosis for other avenues of accountability, noting that the “broken” Federal Election Commission tends to deadlock on matters of import.

That was not the original vision for the FEC, which was created following the Watergate era.

“There are so many parallels between what we have been through over the last five years and what happened in Watergate,” Maguire said. “So in Watergate, most people don’t remember it was a big part of it was a campaign finance scandal.”

This facet of it centered around Richard Nixon’s Committee to Re-Elect the President, an entity branded as CREEP.

“The Committee to Re-Elect the President were going around the country and picking up bags of money in the safety deposit box,” he recounted.

Though Congress reacted to Watergate by passing laws that formed the basis of modern campaign finance laws, those statutes have been steadily eroded by the Supreme Court, and Maguire does not expect them to be strengthened in a Senate that has Mitch McConnell (R-Ky.) leading the Republicans.

“There is one thing and one thing only that is sort of a constant for Mitch McConnell, and it is his belief that campaign finance reform is an attack on free speech,” Maguire noted.

The Jan. 6th Committee’s public hearings resume on Thursday with a focus on the pressure campaign on Trump’s former vice president Mike Pence to reject the certification of President Joe Biden’s victory. Maguire added that more could come to light during the committee’s investigation and others that could change Trump’s potential exposure.