Proud Boy Accused of Seditious Conspiracy Reveals ‘1776 Returns’ Plan to ‘Fill’ Buildings with ‘Patriots’—But Denies It Was a Jan. 6 Blueprint 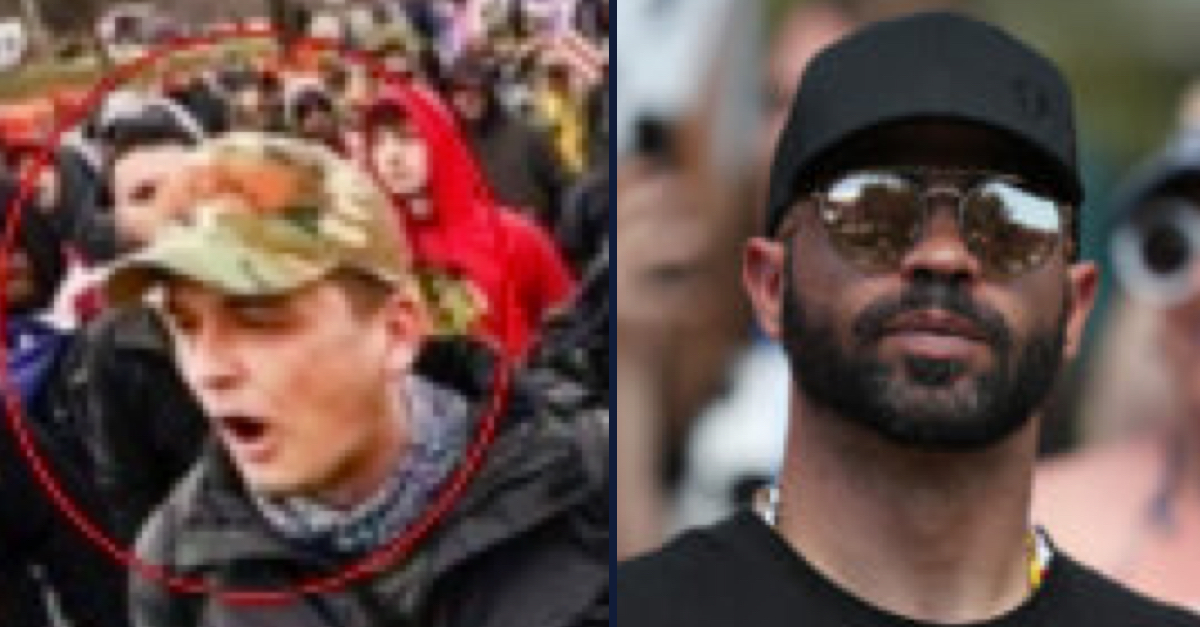 A document known as “1776 Returns” purported to lay out a plan for breaching legislative buildings surrounding the U.S. Capitol, as well as the Supreme Court and CNN.

Long discussed in court filings but never before made public, the document came to light on Wednesday in support of a motion from Zachary Rehl, a member of the Proud Boys extremist group. Rehl now shares an indictment with Proud Boys leader Enrique Tarrio. Both stand accused of seditious conspiracy in the Jan. 6 attack on the Capitol.

Prosecutors say that Tarrio received the “1776 Returns” file with a message from an unidentified individual:  “The revolution is important than anything.”

However, Rehl’s attorney, Carmen Hernandez, claims that the document does not reflect plans to attack the Capitol.

“The 9-page document that was allegedly sent to Mr. Tarrio was not a plan to attack the Capitol and in any event, Tarrio did not share or discuss the document with Mr. Rehl or the other defendants,” Hernandez wrote, adding that her client “had no knowledge” of the document.

“1776 Returns,” Hernandez wrote, “is not a plan to attack the Capitol and does not even mention the Capitol. It refers to occupying Congressional office buildings.”

Hernandez doesn’t reveal the identity of the person who allegedly sent the document, although she does acknowledge that the sender is a “female acquaintance” of Tarrio.

“The document was never shared or otherwise discussed with Mr. Rehl,” Hernandez writes in the filing. “1776 Returns was sent to Mr. Tarrio by a female acquaintance. Mr. Rehl does not know the woman who sent the document and has not had any conversations with her.”

According to Hernandez, prosecutors have said that Tarrio did not forward “1776 Returns” to Rehl or the other defendants, nor did he discuss the document or its contents with them.”

“We Need As Many People As Possible Inside These Buildings.”

The first item in the document’s brief table of contents: “Storm the Winter Palace.”

Included in the “Overall Goal” section of the document:

Fill the buildings with patriots and communicate our demands.

To maintain control over a select few, but crucial buildings in the DC area for a set period of time, presenting our demands in unity. (see attached list of demands in “Patriot Plan” section).

We need many people as possible inside these buildings. These are OUR buildings, they are just renting space. We must show our politicians We the People are in charge.

A list of “Targeted Buildings” included office buildings dedicated to members of both the Senate and House of Representatives, along with the Supreme Court. Three of those Capitol complex office buildings—Raymond, Longworth and Cannon—were the site of a tour by Rep. Barry Loudermilk (R-Ga.) on Jan. 5, 2021, the day before the siege, according to the Jan. 6th Committee. 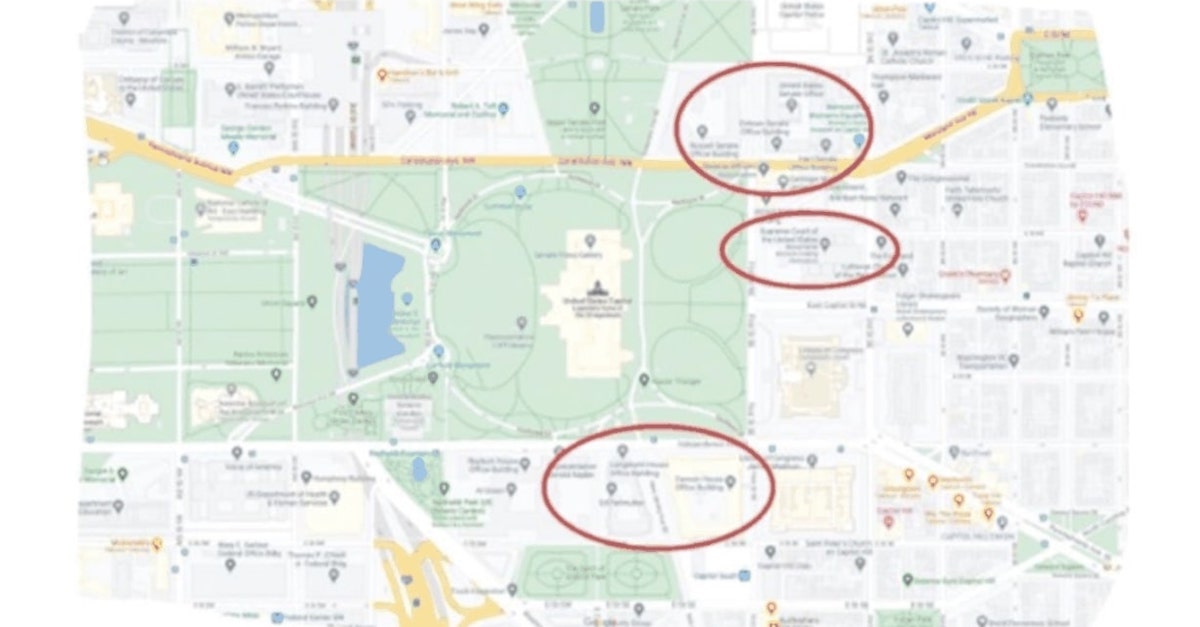 This map is included in the “1776 Returns” document at the bottom of the story.

The third page of the document laid out “Manpower Needs,” with five distinct roles for each of the targeted buildings.

A “Covert Sleeper,” was tasked with setting up a “fake appointment” and was “expected to spend the day as our insider and let people inside the building.” This person had a backup, who “will also need to make a fake appointment.”

Each building would have a dedicated “Hypeman” to lead chants and “maintain energy/presence,” while a “Recruiter” was supposed to lead “gathering patriots” to the “starting point” for each building and “spread the word” about the plan.

As for “patriots” themselves, the plan called for at least 50 in each building, “or it’s a no go for that building.”

A note under the “preparation” to take place from Jan. 1 through Jan. 5 included the suggested to “[u]se Covid to your advantage. Pack huge facemasks and face shields, protect your identity.”

“Do Not Look Tactical At All.”

The document instructed people to prepare for Jan. 6 as the “execution day.” They were told to “drive around buildings and areas before daylight to check on any roadblocks and update plans accordingly.”

The rest of the day was to follow five steps.

The first step, “Infiltrate,” as to have “leads and seconds” stay inside the building “until called upon execution time.” They were told to “[b]e dressed in suits and unsuspecting, do not look tactical at all.”

During the next step, “Execution,” the people planted inside the buildings were to open the doors to the gathering crowd.

“This might include causing trouble near the front doors to distract guards who may be holding the doors off,” the document says. It also suggested pulling fire alarms, presumably allowing the exits to open.

Part three of the plan was to cause distractions “if necessary.”

“Distract law enforcement in the area by pulling other fire alarms around the city,” the document instructed. “This is ONLY to be done at the right time and if _______ makes the call.”

The name of the person who was expected to make the call was not included in the document.

Part four, “Occupy,” instructed rioters to “present our list of demands,” including such slogans as “Liberty or Death,” No Trump, No America,” and “We are watching.”

The final step, “Sit In,” appears unfinished. After instructing people to target offices of specific senators (none of whom are named at this point), a note in all caps reads: “WHATS [sic] THE ENDING POINT FOR THIS? Does everyone just leave at a certain time? WHO DOES GOV RESPOND TO?”

The second-to-last page was a form with blank spaces for each of the “Man Power” assignments.

The final page of instructions—and the only one intended to be publicly distributed—detailed the plan’s logistics for the day.

“You are the revolution,” the document said. “Be a part of history & fight for this country so our children don’t have to. It’s all or nothing Patriots, boldness and bravery is necessary.”

It appears that the “1776 Returns” plan included a handout detailing a demand for a “new election” to be held on Jan. 20. That “election” would be held using only paper ballots, would require each voter to present identification, and would be “[m]onitored by National Guard.”

“We the people love you,” the document said.

“1776 Returns” was initially referenced in court filings when Tarrio was first indicted in March. He has since been charged in a superseding indictment with seditious conspiracy.