Texas Man Was Fatally Shot After Confronting Another ‘For Taking His Wife Out Drinking’: Deputies 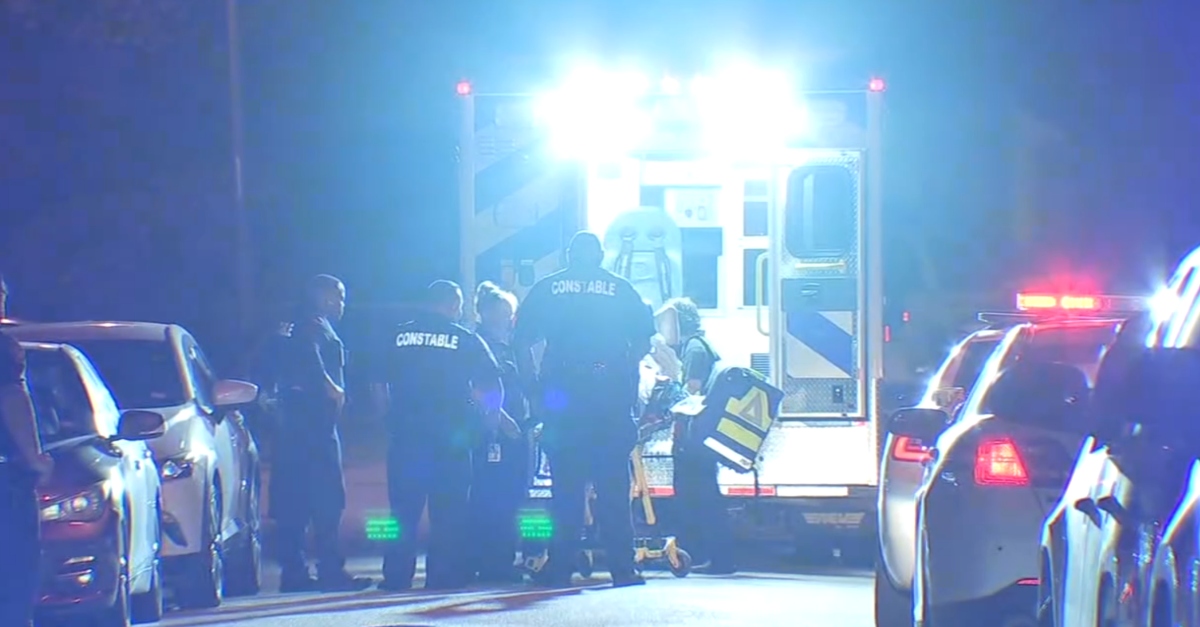 A Texas husband is said to have shot and killed another husband after an alleged spat that tangentially involved both of the men’s wives and a night out drinking.

Authorities did not name the victim or the suspected shooter in the early Wednesday morning incident, but they did confirm that both men were in their early 40s.

Because we don’t know the names of the individuals involved, it’s best to describe the complicated allegations this way: the incident is said to have involved two couples, Couple A and Couple B.

Wife A went out with Couple B for drinks, authorities said.

Couple B dropped Wife A off at home after the night out concluded right before 3 a.m.

That’s when Husband A got mad and confronted Husband B, deputies said.

Husband A allegedly argued with Husband B. Husband B drove home with Wife B — a distance of a mile or two, officials said. Husband B allegedly left his own wife, Wife B, at home, but he allegedly retrieved his gun and returned to Couple A’s home.

Husband A is now dead, and Husband B is believed to have fatally shot him.

That’s how the current law enforcement narrative goes, as alleged by officials quoted in a KTRK-TV report.

“This husband is upset,” sheriff’s office Sgt. Ben Beall said, according to KTRK. “He confronts the man for taking his wife out drinking. And then, that’s when the shooting occurred.”

Harris County Sheriff Ed Gonzalez said that his deputies responded to the 24700 block of Oconee Drive regarding shots being heard and someone lying on the ground. He identified the slain person on Wednesday as a white man in his early 40s. Authorities detained another man, also in his 40s, he said.

“Investigation is underway,” he wrote.

again, and the armed man shot the other. The victim was confirmed deceased. HCSO Homicide/CSU Investigators are on-scene. #HouNews 2/2

The preliminary information is that the men got into an argument, he said. One of them left, got a gun, and returned, he said.

“Upon returning, both males argued again, and the armed man shot the other,” he said.

Local man David Geisler told the outlet he rushed to the scene with his cellphone after hearing “something that sounded like a scream and then a gunshot” followed by the screaming getting event louder.

He found the dying man on the ground with a wound in the stomach, he said. He called 911 and attempted to help, but the man was not breathing, he said.

“Just shortly thereafter, a car pulled up and a gentleman got out of the car,” Geisler said. “They had some words. As far as everything, the screaming going on, I didn’t hear what actually took place. He walked up to me and looked at me and said, ‘I shot him.'”

Deputies say the suspect did not give them a statement. Nor did the authorities announce any charges.

The slain’s man’s wife also went to the hospital because she was distraught, officials said.

A next-door neighbor of the man who died said the shooting victim and his wife were her “heroes.”

“I live alone and they were always taking care of me,” Alice Arbing said. “They were great. I’m devastated over the loss of him.”

“We’d see each other, he’d wave,” neighbor Rebecca Dufresne said, according to KHOU. “He was always outside with his children. He seemed like a really nice dad. Really caring.”

The couple’s two daughters were home during the shooting but physically unhurt, according to KTRK. They are with family. The couple also reportedly has a son who was not at the residence.