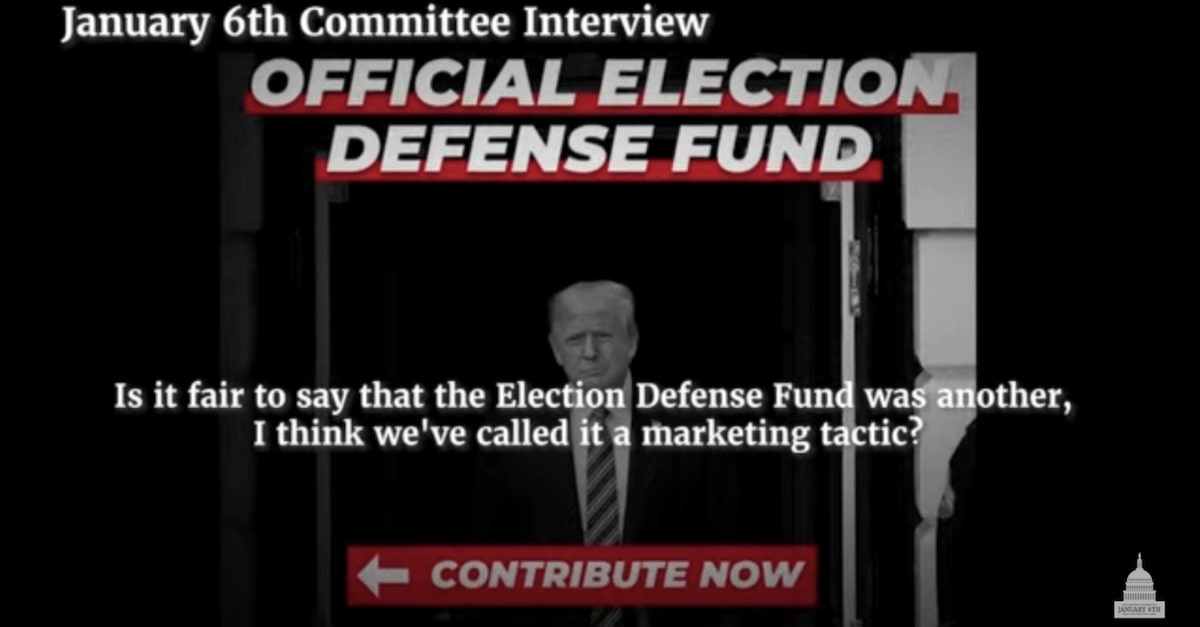 Former President Donald Trump and his allies raised $250 million on bogus election fraud claims through ads that misled donors about where the money was going, the Jan. 6 Committee found in a video presentation ending their second public hearing on Monday.

Some $100 million of that amount flooded into their coffers in the first week alone, according to their investigation.

Playing on the description of Trump’s election fraud claims as the “big lie,” Rep. Zoe Lofgren (D-Calif.) branded the marketing offensive as the “big rip-off,” and she played a brief video rattling off the committee’s findings.

In the footage, the committee’s senior investigative counsel Amanda Wick noted that Trump barraged his supporters with fundraising emails between Election Day and Jan. 6, sometimes at a clip of 25 messages a day.

“The emails claimed the quote-unquote ‘left-wing mob’ was undermining the election, implored supporters to quote ‘step up’ to protect the integrity of the election, and encourage them to ‘fight back,'” Wick noted. “But as the Select Committee has demonstrated, the Trump campaign knew these claims of voter fraud were false, yet they continued to barrage small-dollar donors with emails to something called the Official Election Defense Fund.”

The committee found that no such fund existed—and quoted Trump campaign staffers saying as much.

“I don’t believe there is actually a fund called the Election Defense Fund,” said Hanna Allred, an ex-Trump campaign staffer.

Asked whether that name was a “marketing tactic,” ex-Trump campaign digital director Gary Coby replied: “Yes,” adding that it was meant to suggest where “money can potentially go to be.”

On Nov. 9, 2020, less than a week after Election Day, Trump created his Save America PAC, a political action committee through which he’s continued to exert political power into his post-presidency. Money raised through the ads hawking election defense largely went to this entity, which benefited his businesses and political allies. 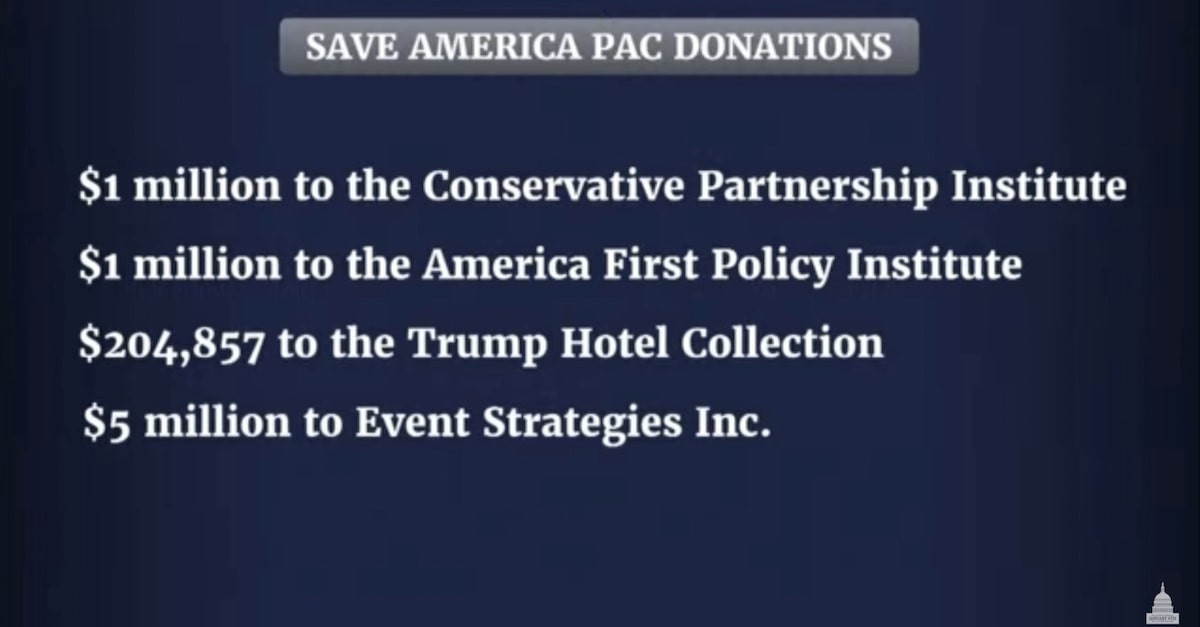 Trump’s Save America PAC benefited his political allies on misleading ads telling donors that the funds would be used on election litigation, the Jan. 6 Committee found. (Screenshot via the committee)

According to the Jan. 6 Committee, this PAC funneled $1 million to the Conservative Partnership Institute, the charitable foundation of Trump’s ex-chief of staff Mark Meadows; $1 million to the America First Policy Institute, which employs his old officials; and $204,857 to the Trump Hotel Collection.

More than $5 million went to Event Strategies Inc., the entity that ran Trump’s rally at the Ellipse on Jan. 6, the committee found.

According to Wick, the fundraising emails continued even as Trump delivered his speech, and the Capitol was breached 30 minutes after the last one was sent.

Before Monday, some of Trump’s post-election windfall became apparent in federal filings.

In May, a federal judge appointed by Trump rejected the Republican Party’s effort to block a subpoena looking into their marketing strategies.

“In sum, the materials demanded have particular ‘value’ to the Select Committee ‘in the exercise of legislative duty,’ and its interest in this information is strong,” U.S. District Judge Timothy Kelly found at the time.

“It’s clear that he intentionally misled his donors, asked them to donate to a fund that didn’t exist and used the money raised for something other than what he said,” Lofgren said. “Now it’s for someone else to decide whether that’s criminal or not.”

Before, during and after his presidency, Trump has been dogged by allegations of fraud. Some of those claims have animated ongoing civil and criminal inquiries. New York Attorney Letitia James (D) has spent years probing the Trump Organization for evidence that it overstated or understated the former president’s assets to inappropriately claim tax benefits. A parallel investigation by Manhattan District Attorney Alvin Bragg (D), whose predecessor Cyrus Vance (D) indicted ex-Trump Organization chief financial officer Allen Weisselberg, remains ongoing—at least officially.

Trump has claimed that Democratic regulators keep targeting his businesses because they’re playing politics, but plaintiffs who aren’t elected officials have consistently accused the former president of swindling them. In federal court, Trump and his family face a lawsuit alleging that they promoted a pyramid scheme. A New York Times investigation into his inheritance found flatly that he committed “outright fraud” in his tax dealings. Trump never sued over that news story, which sparked litigation by his niece, Mary Trump.