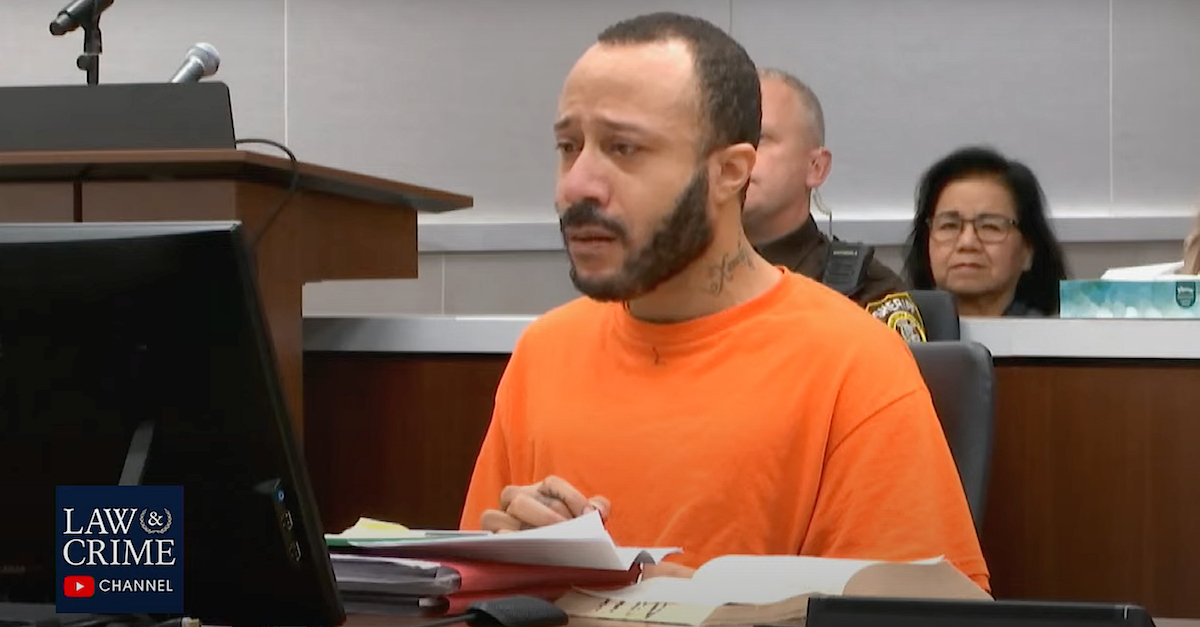 Convicted Waukesha parade murderer Darrell Brooks cried while listening to his mother provide a statement to the court before his sentencing. (Image via the Law&Crime YouTube channel.)

The mother, grandmother, and friend of convicted Waukesha parade murderer Darrell Brooks — and then the defendant himself — spoke in court on Wednesday before he was slated to be sentenced.

The defendant’s rambling speech remained ongoing after well more than an hour as of the time of this report, but here’s some of what he — and his three supporters — said early Wednesday afternoon.

“Mental illness affects everyone,” Dawn Woods said. “It destroys lives, families, and hurts society. For far too long it’s been a dirty little secret in families that no one wants to talk about. Mental illness is the elephant in the room.”

His mother blamed “society” and “lawmakers” for not helping mental health patients.

She did not discuss the specifics of the more than 70 counts — including multiple counts of first-degree intentional homicide, first-degree recklessly endangering safety, and hit-and-run involving death — of which Brooks was convicted.

Six died when Brooks slammed a maroon SUV through a crowd assembled for a holiday parade on Nov. 21, 2021. Woods’ statements were part of two days of victim impact statements in the matter.  Only three people spoke on Brooks’ behalf.

“How about showing a little compassion, empathy, and some understanding?” Woods quizzed rhetorically while discussing mental health patients generally — with assumed reference to her son. “Families need to advocate . . . lawmakers should support providing resources . . . so they can get the help they need.”

She said people who live with mental illness are oftentimes “shunned by families and friends, rejected by society, and made fun of — the subject of bad jokes, ridicule, and judged on YouTube, podcasts, Facebook, and other media posts.”

“No one sees their pain or hears their cries and pleas for help,” Woods continued. “They are the forgotten ones and viewed by many as not having a place in society.” 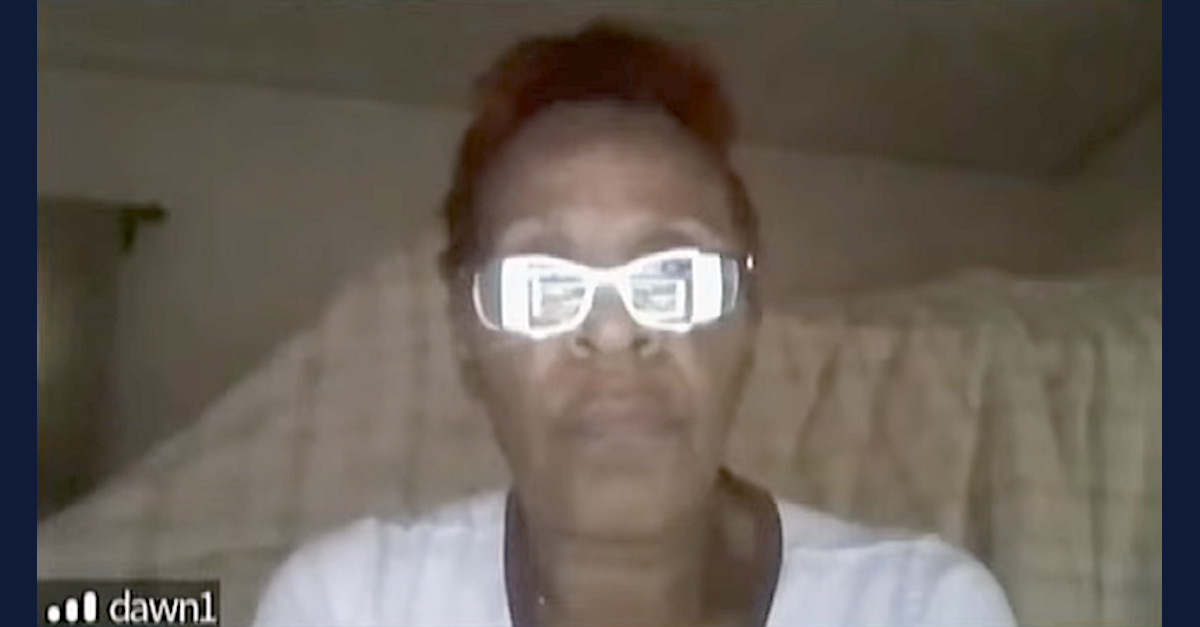 She said early treatment would “maybe” lead to “less court cases and less people crying because their loved ones was hurt, or was injured or killed, because someone of mental illness attacked them — maybe that needs to be done, treatment needs to be done early and right away and stayed up on, and not let people fall through the crack hole, and not be shunned out the door, saying, ‘you don’t have a mental illness, you just a bad person that needs to be locked up.'”

The mother then read a Maya Angelou poem about racial injustice that she believed was applicable to mental illness.

For one of the first times in the proceeding, Brooks became emotional. He rolled his eyes, prayed, and at times applauded during statements from his victims and their relatives.

Near the conclusion of her speech, which included calls for institutional treatment, Woods said she knew the pain the victims suffered.

“I know their pain, and I pray that the Lord would continue to comfort and heal each of them,” the defendant’s mother concluded.

Her statement was more about advocacy than it was about describing her son’s life in specifics. 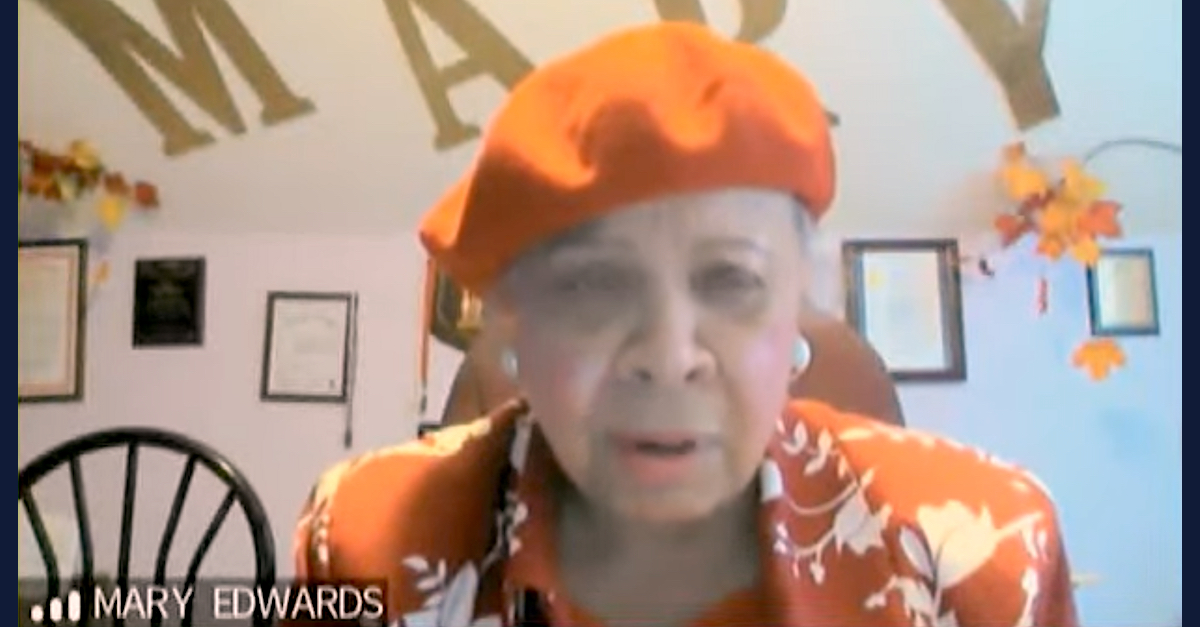 Mary Edwards, the defendant’s grandmother, said she was not the “wicked grandmother of the West” as some might envision her.

“From the bottom of my heart, I want to offer my sincere apologies by those who have been hurt so badly by what has happened here — this tragedy that has been caused by my grandson,” Edwards said.

Edwards, who said she was a “minister of the Gospel of Jesus Christ,” she offered a reading from the Bible.

Edwards implored Brooks to apologize and repent for his “horrible, terrible deed” and asked the victims who said they would never forgive Brooks to reconsider.

Edwards said Brooks has lived with bipolar disorder since age 12.

“It was that disorder that caused him to drive through that crowd,” Edwards claimed, but she did address Brooks’ drug use or his long criminal history. 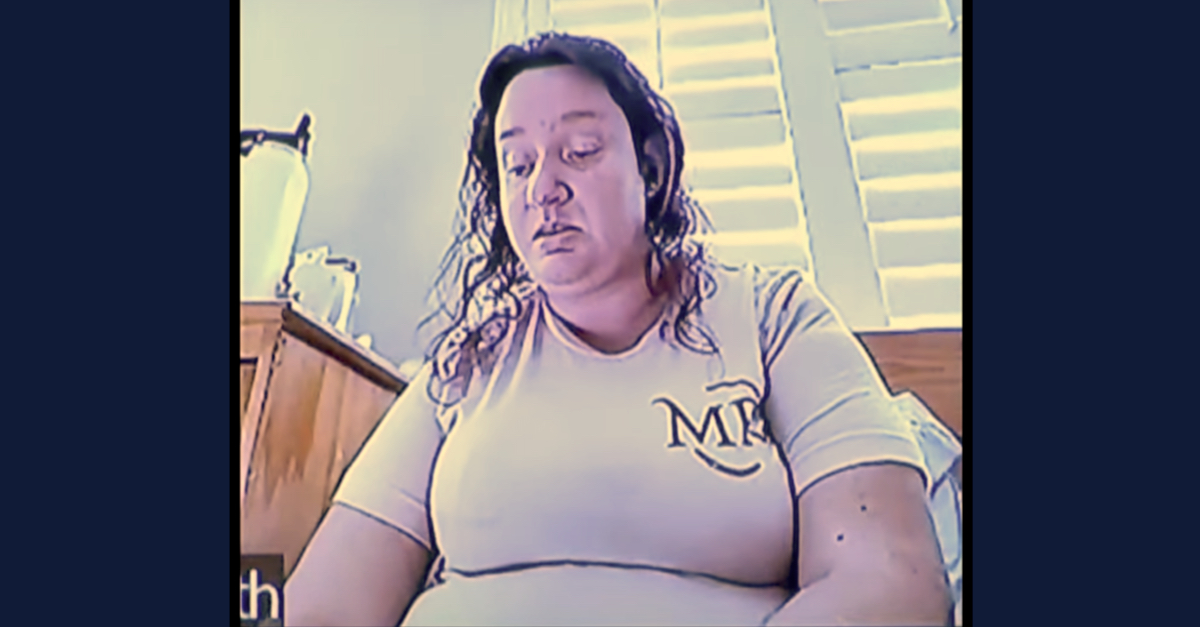 Michele Allworth, a friend, said the crimes of which Brooks was convicted were “not the Darrell I know.”

“He is a loving, compassion, loyal, and tender person,” she asserted.

“During this manic episode, he blacked out the entire incident,” she claimed.

Brooks Speaks on His Own Behalf

Brooks then addressed the court on his own behalf. He said he wished to give glory to God and to acknowledge the death of Jesus Christ as the source of forgiveness for all humans.

But Brooks said his conscience was only clear because he made a decision to “rededicate my life to Christ when this tragedy happened.” 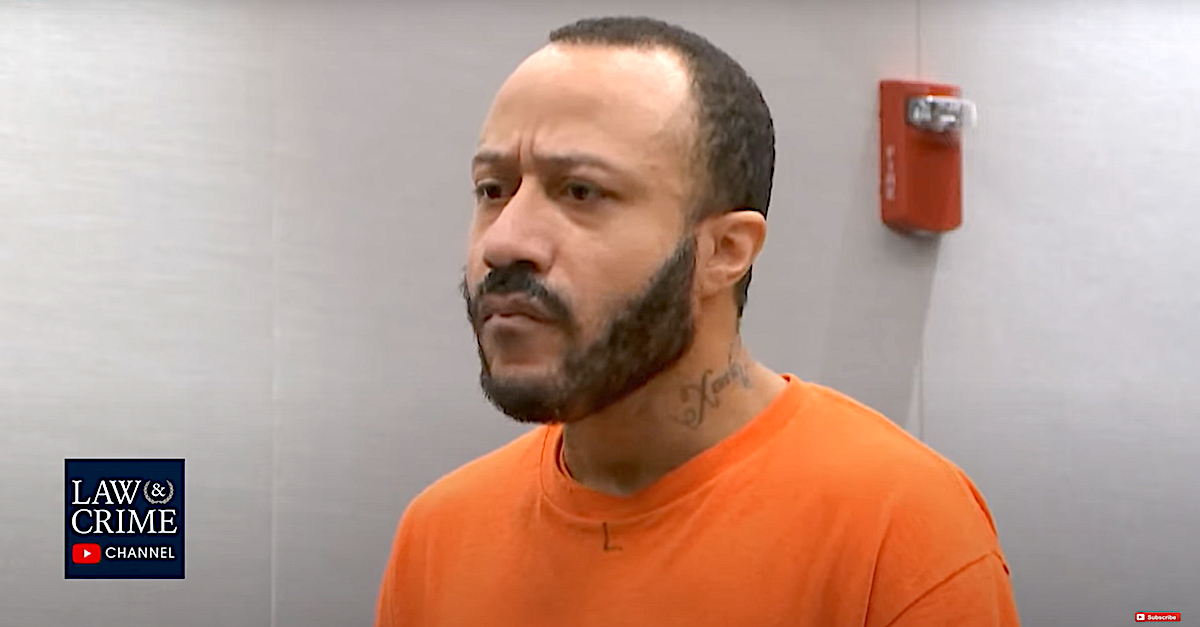 “I have repented; I have asked God for forgiveness; I have sent many prayers up,” he then asserted. “Learning how to wrap my head around this whole situation has been extremely hard; extremely hard.”

He then talked about taking time to “reflect” on the mayhem, the chaos, the pain, in the conviction “when you’re alone in your cell — when it’s just you an the walls.”

He said he “struggles” with the “why and the how” of what happened.

“How could life ever get this far away from what it should be?” he pondered. “I know who I am; God knows who I am; I don’t have any words of anger.”

“I have to by okay with the fact that some will be angry, some for a long time, some forever,” he went on.

At one point, Brooks described himself as a “pot boiling over” and as a person who was not able to control himself.

At another point during the defendant’s long and verbose speech, prosecutors appeared to shun his words as too little, too late. 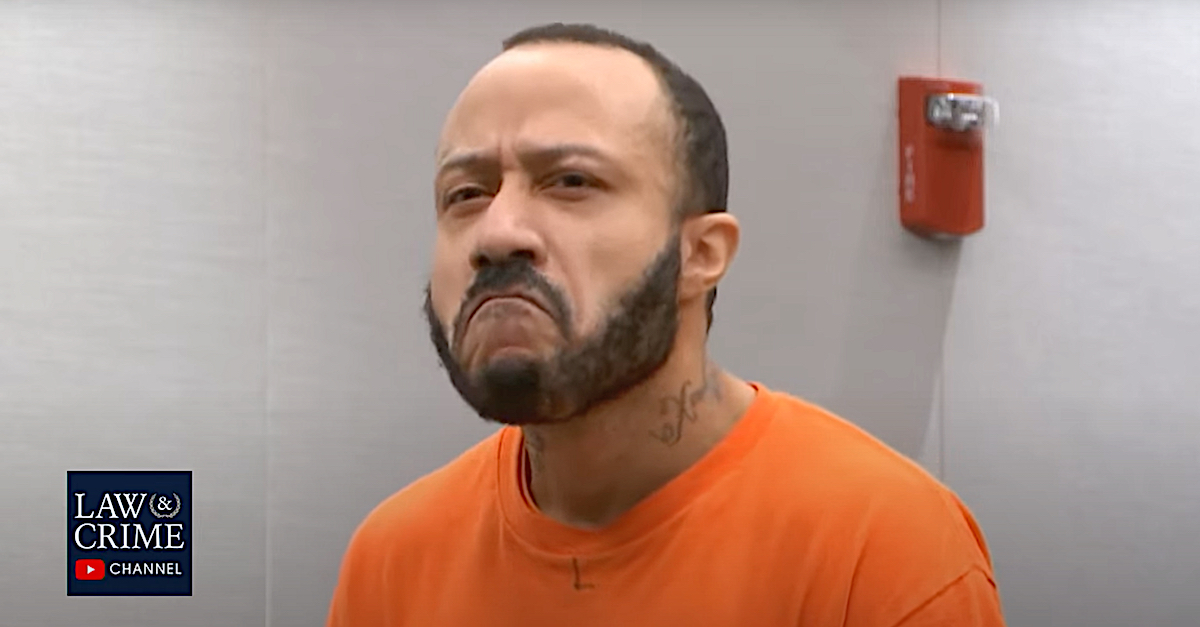 The defendant went on to balk at having to work several jobs and live life with mental health issues and as the victim of “physical abuse.” He elucidated at one point about “living in an apartment building infested with rodents and bugs” — “a lot of people weren’t raised like that.”

He then criticized descriptions of his crimes.

Brooks was convicted of first-degree intentional homicide. Prosecutors glared at him with an air of stunned and indignant silence. 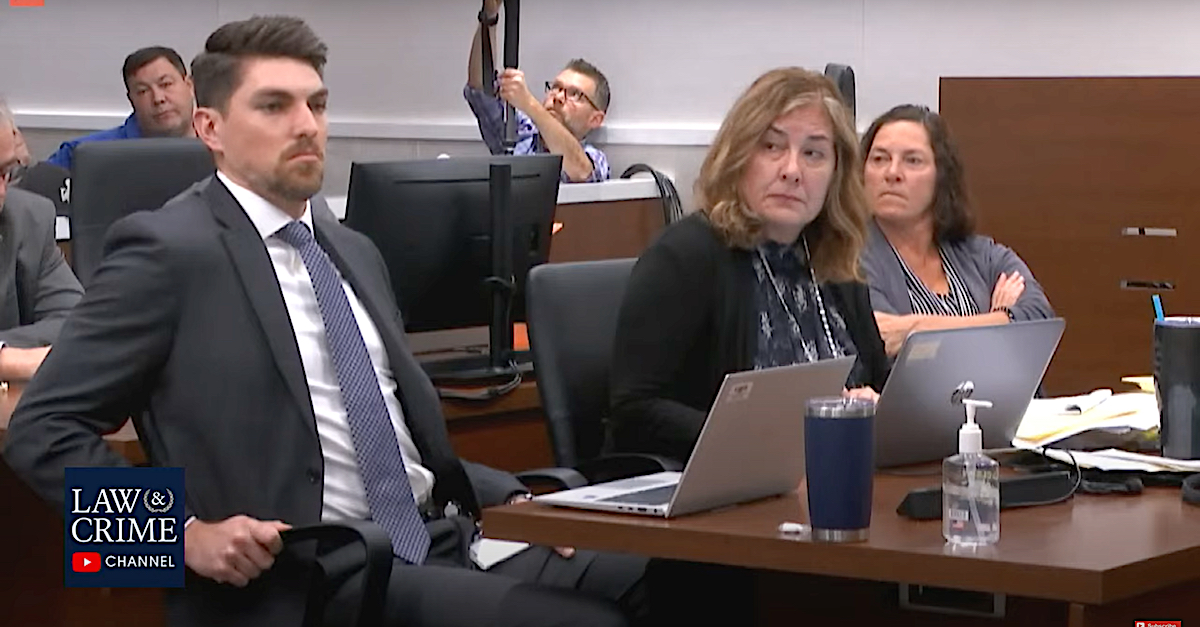 Prosecutors looked at Darrell Brooks during his statement to the court prior to sentencing. (Image via the Law&Crime YouTube channel.)

“They’re well within their rights to feel how they feel,” Brooks said of the families of the victims who criticized him during victim impact statements — but he said he would “choose to take the high road” in the matter.

Later, Brooks said he respected the prosecutors but disrespected District Attorney Susan L. Opper for the way she conducted herself.

“I had every intention to come in here and lay into you,” he told Opper directly, “out of frustration and out of the fact that I felt the need to defend myself from some of the things you said.” 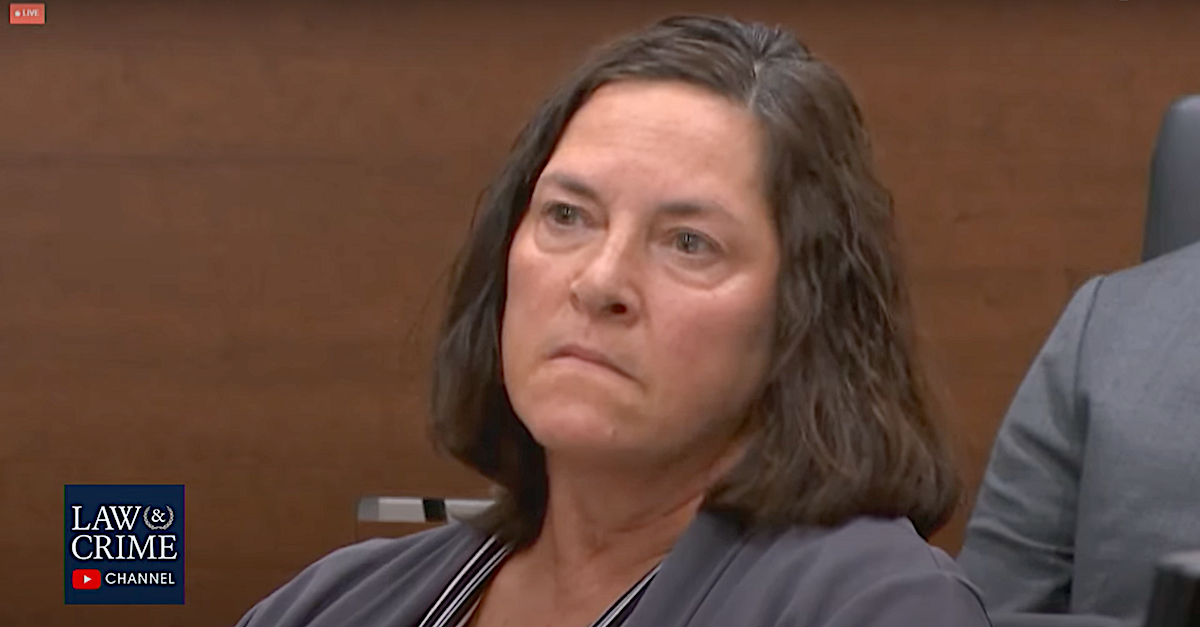 Brooks accused Opper of “reading a police report” and passing judgment about situations that “frankly is none of your concern.”

Brooks said he expected the DA to have “some kind of integrity.” He specifically called out Opper for claiming the case was “an open and shut cause” but that she employed “a whole team” of people to prosecute it.

Opper just sat and looked at him.

“I don’t believe you’re that bright,” he eventually told her. But he said he would have “no ill feelings” when he leaves the courtroom.