Transgender Oath Keeper Tells Jury Bullying Sent Her ‘AWOL’ from Army, Before ‘Steady Diet’ of Alex Jones Drove Her to the Militia 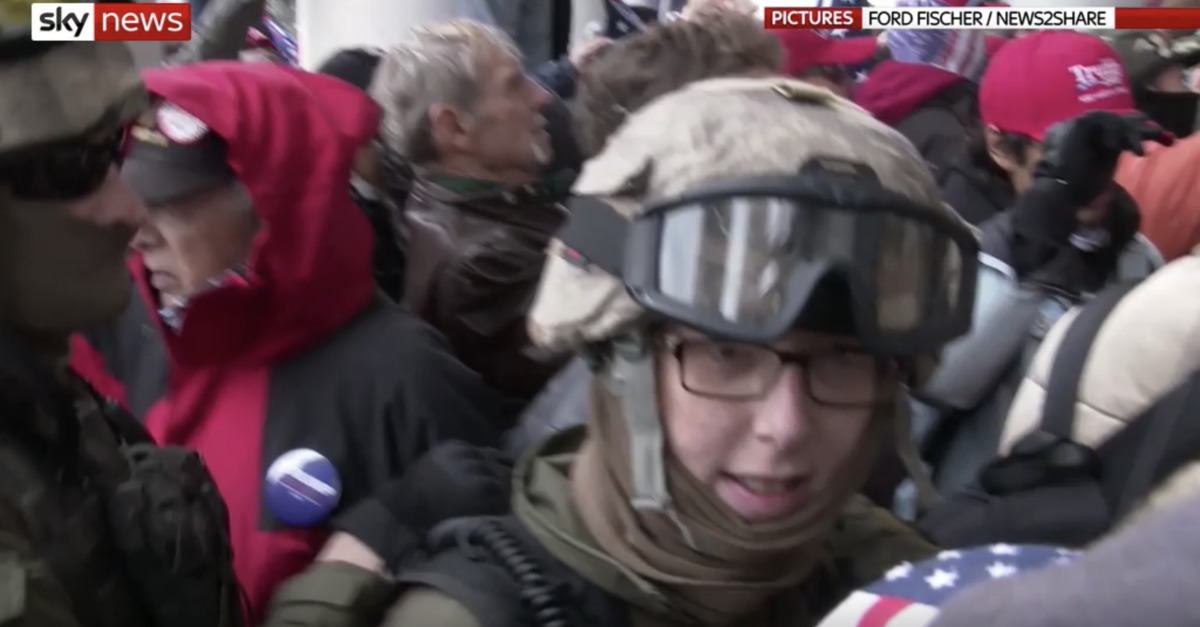 Surprising a federal judge with her 11th hour decision to testify, transgender Oath Keeper Jessica Watkins told jurors about the bullying and abandonment she faced over her identity. When her secret got out, Watkins said, she was shunned by her parents, went “AWOL” from the Army, and ultimately found a homecoming both with her family and a paramilitary group whose leadership is now on trial for seditious conspiracy.

Watkins received an “other than honorable” discharge form the U.S. Army when the Ohio woman she absented herself without leave to Alaska. She had lived and presented as a man during the time of her service, and she said a member of her unit learned about her identity when he borrowed her laptop.

“I know who you are, faggot,” she recounted the soldier saying, imitating the man pointing his finger.

Jurors saw evidence of Watkins flinging the same anti-gay slur, and she called the language evidence of her self-hatred.

“I think it was lashing out at others the way I’ve been lashed out at,” Watkins said.

Eventually, Watkins said, she came out to her parents.

“I was asked never to come home again,” she reflected.

For her parents, Watkins told the jury, that “never” had an expiration date. She said that she became a firefighter before they welcomed her back home once again.

“It was awkward, very awkward. I hadn’t seen my parents in 13, 14 years. Maybe 15 years. It’d been a while. But they were open. They were accepting. They were warm. It was shocking,” Watkins said, adding that around Christmas time that they even bought her “girly things.”

The path that Watkins said led her to the Oath Keepers — a group with whose leadership and members she is standing trial for seditious conspiracy to overthrow the U.S. government or the execution of its laws — wound through a “steady diet” of the outlandish broadcasts of Alex Jones, the doyen of right-wing conspiracy mongering.

“That’s probably how I found the Oath Keepers in the first place,” Watkins said. “I watched it five, six hours a day.”

From his earliest days in Infowars, Jones openly courted the emergence of the so-called militia movement, peddling “false flag” theories about the Oklahoma City bombings and inflammatory commentary about the Waco siege. Oath Keepers founder and leader Stewart Rhodes announced the group’s founding on Infowars — and received another invitation to share his plans regarding Jan. 6th from Jones, in broadcasts entered into evidence at trial. Jones himself is facing intense legal pressure, facing civil verdicts to the tune of more than $1.4 billion for defaming grieving parents of Sandy Hook shooting victims as participants in “hoax.”

Watkins said that she internalized his empire of paranoia, fearing an imagined plot by the United Nations and the Chinese government to infiltrate a Joe Biden administration to subjugate the population. Internal Oath Keeper communications showed Rhodes was fond of calling Biden and Vice President Kamala Harris “Chicom puppets,” short for the Chinese Communist Party.

“I put two and two together that the United Nations was going to come here and go door-to-door with vaccines, and I didn’t want it,” Watkins said. “I gave that a 50/50 shot.”

She said she does not believe that any more.

“I think I was gullible,” she testified, though she later asserted she still has “questions” about the 2020 presidential election.

From her introduction to the Oath Keepers, Watkins found herself in the company of notables in the presidency of Donald Trump. At the so-called Million MAGA March, she recalled that the group was assigned as security detail for Jones and Michael Flynn. She said she was “stoked” to potentially meet Roger Stone, the longtime GOP operative with a tattoo of Richard Nixon on his back. Both the Oath Keepers and the Proud Boys had chat rooms on the encrypted chat app Signal called “F.O.S.,” short for “Friends of Stone.”

“It’s Trump’s inner circle,” she said. “It was exciting.”

Asked about her participation in the riot, Watkins freely admitted entering the building — a fact never seriously in doubt from the Capitol’s surveillance footage. She said that was a mistake and claimed repeatedly to have been “swept up” in the moment.

“It was very stupid,” Watkins said, comparing the feeling to being part of a stampede in a Black Friday sale.

Watkins also waxed indignant about those who defaced and damaged the building.

She testified shortly after her accused co-conspirator Thomas Caldwell, who ended his three-day stint on the witness stand on Wednesday morning. Rhodes addressed the jury before Caldwell, and the two remaining co-defendants — Kenneth Harrelson and Kelly Meggs — have not yet rested their cases.

U.S. District Judge Amit Mehta initially told jurors that closing arguments were anticipated to begin on Wednesday afternoon, before Watkins’ attorney Jonathan Crisp delivered the surprise announcement that his client would testify. The government will cross-examine her on Thursday morning.