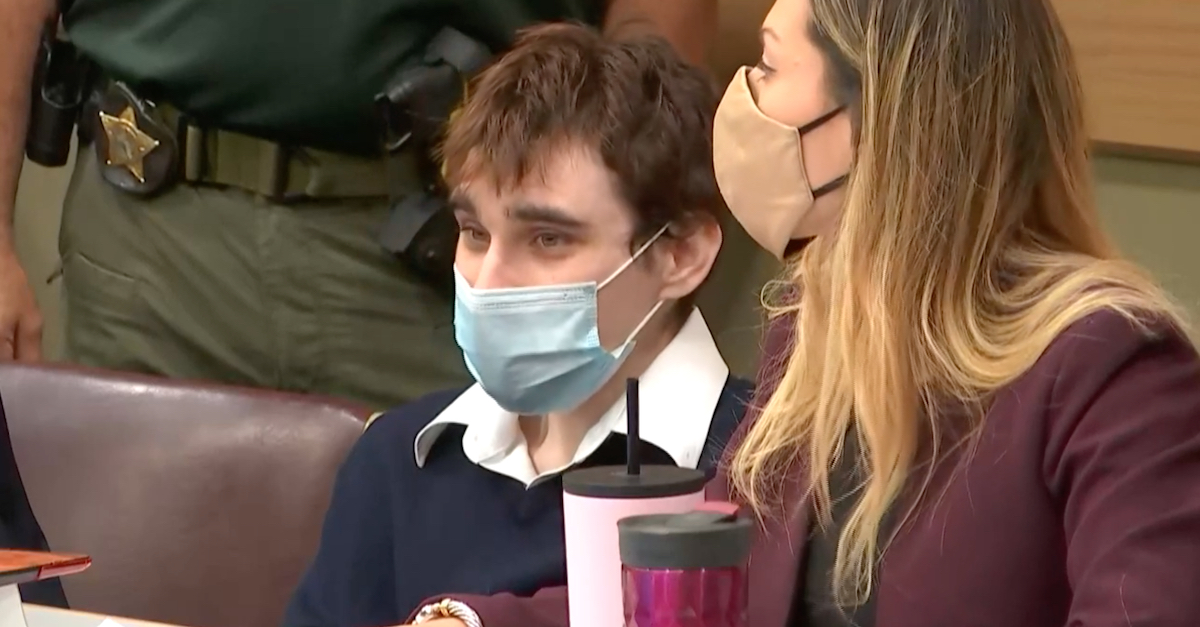 Nikolas Cruz looks on during an Oct. 6, 20021 court appearance. (Image via screengrab from the Law&Crime Network.)

The alleged perpetrator of the Parkland school massacre at Marjory Stoneman Douglas High reportedly wants to try to plead guilty on Friday.

Nikolas Cruz, 23, has long telegraphed through his defense attorneys that he wished to plead guilty. The defendant is charged with 17 counts of premeditated murder and 17 counts of attempted murder.

The Valentine’s Day 2018 shooting claimed the lives of 14 students and three school staffers.

According to local FOX affiliate WSVN on Thursday, the Cruz defense team has been asking for an agreement with prosecutors not to seek the death penalty and to ensure a sentence of life in prison without the possibility of parole. The reportedly renewed request mirrors longstanding attempts by the defense to save Cruz’s life; Prosecutors, however, have long rebuffed the tactic and have expressed a continued and unwavering desire to seek an execution.

The TV station reports that Cruz’s attorneys will “officially announce” a plea of some sort on Friday.  However, it noted that the Public Defender’s Office would neither confirm nor deny the actual content of the plea.

Such secrecy is no surprise.  Model ethics rules suggest that attorneys should not discuss “the possibility of a plea of guilty to the offense or the existence or contents of any confession, admission, or statement given by a defendant.”  Doing so would poison a potential jury if such talks fell through.  Florida’s binding rules of professional conduct caution lawyers not speak to the press but do not directly forbid comments about any particular content.

Assuming a guilty plea is in the works, the high-profile case will skip the guilt portion of the case and proceed immediately to the penalty phase. South Florida jurors would then take Cruz’s life into their own hands.

WSVN also reports another guilty plea may be in the offing in a connected case involving cruz:

7News has also learned that Cruz will also plead guilty to battery on a Broward County jail guard back in November 2018. Surveillance video first obtained by 7News showed Cruz rushing and punching Sgt. Raymond Beltran in a brawl that lasted nearly a minute before coming to an end.

According to the South Florida Sun-Sentinel, Broward State Attorney’s Office spokesperson Paula McMahon said “[n]o plea agreement has been reached with our office” and directed questions about the possible plea to Cruz’s defense attorneys.

As Law&Crime previously reported, Cruz was recently the subject of recent scorn when someone in court brought him colored pencils and other drawing materials as he attended jury selection in the case surrounding the jailhouse brawl.

“We’re objecting to that, your honor,” an outraged prosecutor said. “We believe that that is something they are doing so the jury perceives that, you know, he’s a child and he has a, you know, some kind of — um — his mentality is some kind of challenged. We think that’s inappropriate, and we object to a coloring book page and coloring pencils being given — just provided to the defendant for him to use.”

When quizzed by Judge Elizabeth Scherer about the breach of decorum, the defense said the artistic implements were because their client wasn’t feeling very good.

“Judge, he’s clearly upset,” a defense attorney said. “He’s visibly upset right now. I’m trying to keep him calm during this trial, and the defense team is not doing this for any nefarious reasons. Trying to keep my client calm.”

It’s unclear from recordings of the proceeding broadcast on the Law&Crime Network precisely who handed Cruz the colored pencils.  The person is visible on video, but calls by Law&Crime to Judge Scherer’s chambers to inquire about the person’s identity have not been returned.