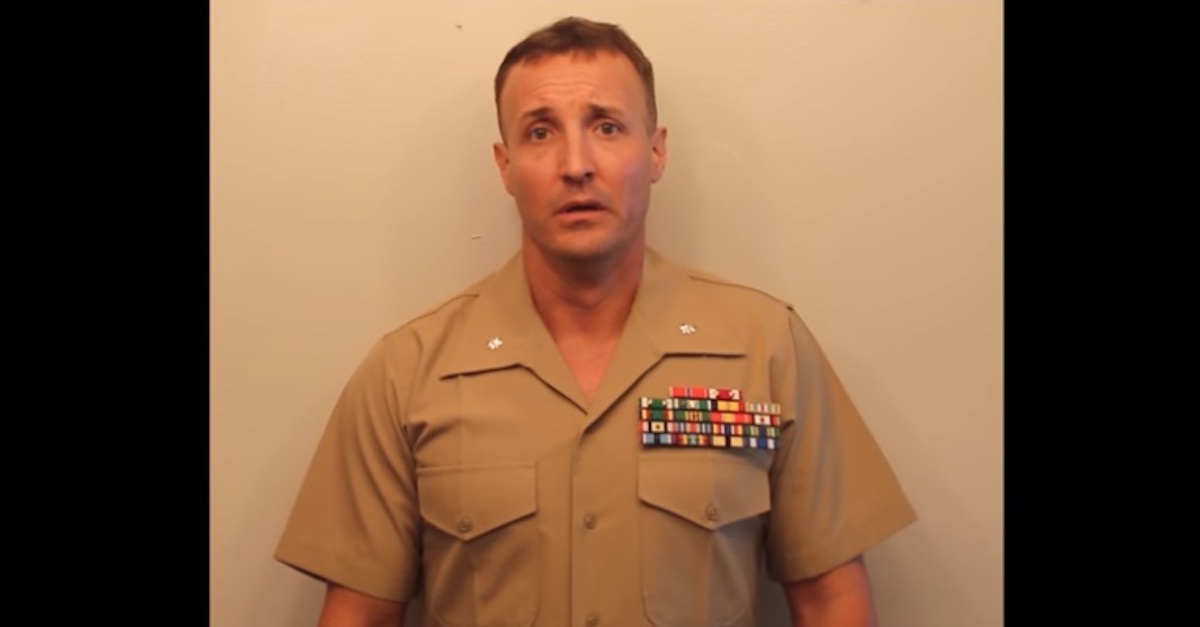 A Marine who posted several videos harshly criticizing U.S. military leaders and the withdrawal from Afghanistan has pleaded guilty to multiple criminal charges.

“Marine Corps Judge Col. Glen Hines found Lt. Col. Stuart Scheller guilty after he entered guilty pleas to all five charges he faced — including ‘contempt towards officials,’ ‘disrespect toward superior commissioned officers’ and ‘failure to obey order or regulation’ — after videos of Scheller criticizing military leaders about their handling of the withdrawal went viral,” CNN reported.

Scheller posted his first video on Aug. 26 after a suicide bombing at Hamid Karzai International Airport in Kabul further destabilized already chaotic evacuation efforts to get U.S. citizens and Afghans who supported U.S. efforts there out of the country.

In that video, Scheller praised his own courage for speaking out — saying that doing so gave him the “moral high ground” to demand answers from military leaders.

“I’m not making this video because it’s potentially an emotional time,” he said.  “I’m making it because I have a growing discontent and contempt for my perceived ineptitude at the foreign policy level and I want to specifically ask some questions to some of my senior leaders.”

He also praised his own courage in posting the video, saying that while he had “a lot to lose,” including his rank, retirement, and “family’s stability.”  He said speaking his mind gave him “some moral high ground to demand the same honesty, integrity, accountability for my senior leaders.”

Scheller was fired as the commander of the Advanced Infantry Training Battalion at Camp Lejeune after he posted his first video, the Washington Post reported, but went on to post three more.

On Thursday, Scheller, who has been a Marine for 17 years, told Hines that his life began “spiraling” after he posted the first video.

“He said his wife left him, fellow Marine officers turned their backs on him and the Marine Corps opened an investigation into his actions,” the Washington Post reported.

However, he also became a conservative darling, as the Afghanistan withdrawal became a rallying cry for Republicans angry with Joe Biden‘s administration and military officials.

“Several dozen Republicans called for his release from pretrial confinement in a letter late last month, and the case has received significant attention in conservative media,” the Washington Post reported.

Retired Chief Petty Officer Edward Gallagher, who was acquitted in 2019 of an alleged murder in Iraq, has also spoken out in support of Scheller, the Post said.

A fundraiser for Scheller went up on a conservative website, amassing nearly $2 million from more than 30,000 donations largely from Donald Trump supporters.  Scheller’s parents appeared on Fox News.

“Among the witnesses called by Scheller’s defense team were Rep. Louie Gohmert (R.-Tex.) and Rep. Marjorie Taylor Greene (R-Ga.), two of the most controversial members of Congress,” the Washington Post reported. “They questioned why Scheller has been prosecuted for his actions when senior U.S. officials such as President Biden, Defense Secretary Lloyd Austin and Gen. Mark A. Milley, chairman of the Joint Chiefs, have not. Greene, under oath, called for the impeachment of Biden for his handling of Afghanistan and said her office has been flooded with calls in support of Scheller. She also accused U.S. troops who carried out a drone strike that killed civilians in the closing days of the United States’ withdrawal of ‘war crimes.'”

In the hearing, Hines asked Scheller if he believes he is guilty of all the charges, CNN reported.

“Yes sir. I am guilty, and I am accepting accountability,” Scheller said.

However, at another point in the hearing, Scheller appeared to hedge somewhat.  When Hines asked Schiller about being guilty of “dereliction of duty,” Schiller retorted that he “willfully disobeyed an order to tell hard truths.”

Scheller’s plea deal with the Marine Corps limits his sentence to a letter of reprimand and a seizure of two-thirds of his pay for up to 12 months, the Washington Post wrote.