‘I Will Not Receive a Fair Trial’: Parkland School Shooter Asks ‘Prejudiced’ Judge to Disqualify Herself for Lashing Out at Defense Attorneys

Lawyers for Nikolas Cruz, the admitted Parkland, Florida school shooter, filed a motion on Friday — and then filed a corrected version of virtually the same document on Saturday — to ask Judge Elizabeth Scherer to disqualify herself from presiding over a proceeding that could result in the death penalty for Cruz.

Scherer scolded Cruz’s defense attorneys for resting their case on Wednesday without calling roughly half of the witnesses who were expected to testify on the defendant’s behalf.

That tactical decision shut down the defense side of the case much earlier than expected.

The move stunned the judge, who then asked prosecutors if they had witnesses available to testify on Wednesday.

The state replied that it was expecting an additional 40 defense witnesses and therefore had no one ready to take the stand.

The defense had originally promulgated an 80-person witness list for the penalty phase of a trial surrounding the 2018 mass murder at the Marjory Stoneman Douglas High School.

“We’re not playing chess,” the increasingly incensed judge said to the defense.

“I just want to say, this is the most uncalled for, unprofessional way to try a case,” Scherer continued — again to the defense. “You all knew about this, and even if you didn’t make your decision until this morning, to have 22 people, plus all of the staff and every attorney march into court, be waiting as if it’s some kind of game — now I have to send them home. The State’s not ready. They’re not going to have a witness ready. We have another day wasted. I just — I — honestly, I have never experienced a level of unprofessionalism in my career. It’s unbelievable.”

Cruz attorney Melisa McNeill of the Broward Public Defender’s Office stood up on behalf of the defense.

“I have been practicing in this county for 22 years,” McNeill said — but Scherer cut her off.

“You know what, I don’t want to hear it,” the judge said.

“Well, judge, you’re insulting me on the record in front of my client, and I believe I should be able to defend myself,” McNeill responded.

“You can do that later,” Scherer said. “You can make your record later, but you have been insulting me the entire trial, so — blatantly.  Taking your headphones off.  Arguing with me.  Storming out.  Coming late intentionally if you don’t like my rulings.  So, quite frankly, this has been long overdue; so please be seated.” 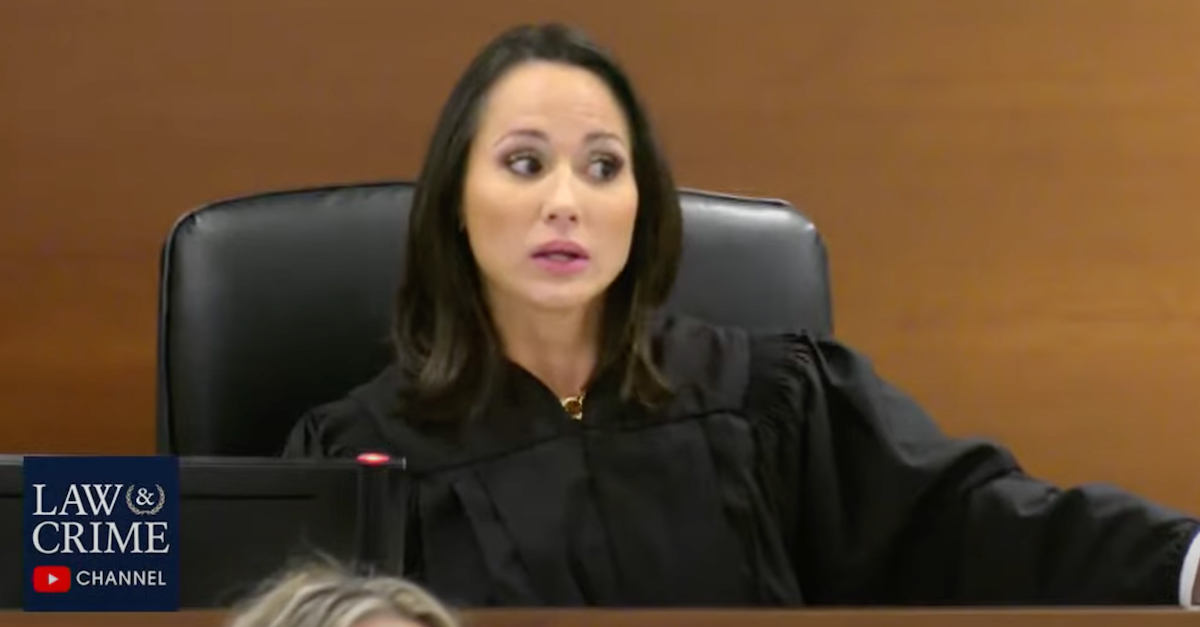 A screengrab from the Law&Crime Channel on YouTube shows Judge Scherer scolding Nikolas Cruz’s lawyers after a tactical decision to rest the defense case.

The jury was then brought into the room; the defense then formally rested in front of the panel.

Scherer then called the jury’s attention to the timeline of events in a way that further rankled the defense.

“So, we did not anticipate that the defense would be resting today; therefore, the State is not prepared to go forward with the rebuttal case until the 27th,” Scherer told the jury.  “If I had known earlier that this was going to be happening, I would have — I would not have dragged you all in here.”

It was a rocky end to the defense’s case.

The defense’s written motion to disqualify Scherer sniped back at the judge by quoting the preamble to the Sunshine State’s Code of Judicial Conduct.  The requisite passage reads as follows:

Our legal system is based on the principle that an independent, fair and competent judiciary will interpret and apply the laws that govern us. The role of the judiciary is central to American concepts of justice and the rule of law. Intrinsic to all sections of this Code are the precepts that judges, individually and collectively, must respect and honor the judicial office as a public trust and strive to enhance and maintain confidence in our legal system. The judge is an arbiter of facts and law for the resolution of disputes and a highly visible symbol of government under the rule of law.

“This Court’s comments made about lead defense counsel, on September 14, is [sic] the zenith of the cumulative disdain the Court has publicly expressed,” the defense wrote.

The defense said Scherer’s criticism as to the timeline came after the judge ordered the parties to return to court to handle “any matters” related to the case; the defense said it was in the process of trying to enter several records into evidence when Scherer lashed out about the lack of live witness testimony.

The defense argued that Scherer should not have “placed blame” on the defense “for the jury’s inconvenience” in that process.

Cruz’s attorneys also accused Scherer of having “undermined the defense by insinuating to the jury that the defense did not provide the State or the Court with information it should have in advance and as a result, they came to court unnecessarily.”

“That is patently false,” the defense document continued.  “The defense had absolutely no legal obligation to advise the State or Court in advance of its intention to rest its case.  Moreover, the jury has to be present for the defense to rest.  Finally, the Court tied itself to the State when it indicated ‘we did not anticipate’ and then ‘therefore, the State is not prepared.’  In essence the Court blamed the defense and gave the jury an excuse for the State’s inability to move forward for nearly two weeks.”

The upshot, the defense asserted, is that Scherer “caused Mr. Cruz to reasonably fear that the Court is prejudiced against his lawyers and him and that he will not receive a fair and impartial trial going forward.”

“The Court has now revealed that its animosity toward lead defense counsel is long-held and has infected this entire trial,” the filing adds.

The defense then distinguished two separate scenarios.  While the defense attorneys said they were used to losing motions based on the facts and the law in various other proceedings, the attorneys said they were not accustomed to being the subject of “long-standing and pervasive” feelings of animosity from a judge.  As to the latter, the defense accused Scherer of issuing rulings based, in essence, on hatred.

“Mr. Cruz has a reasonable belief that the rulings of the Court have been influenced by its adverse feelings which do not go to the legal issue before the court,” the motion reads.  “In essence, what the Court has been feeling throughout this trial, and has now stated on the record, has corrupted this trial and should compel the granting of both a mistrial and a recusal so an unbiased jurist can properly try this case without the prejudice Mr. Cruz suffers in this proceeding.”

The defense then cited a laundry list of incidents of so-called “blatant hostility” by the judge.

“The Florida Supreme Court has reasoned that ‘[t]he attitude of the judge and the atmosphere of the court room should indeed be such that no matter what charge is lodged against a litigant . . . [the litigant] can approach the bar with every assurance that he [or she] is in a forum where the judicial ermine is everything that it typifies, purity and justice,” the defense reminded Scherer. 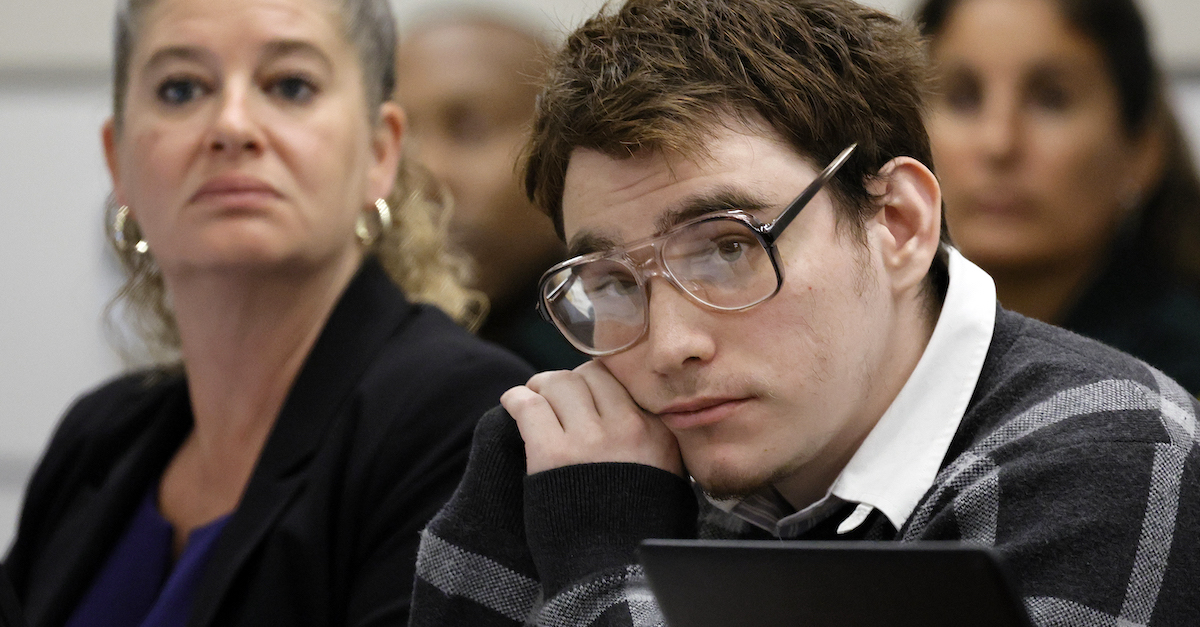 An affidavit by Cruz himself is attached to the motion.

In that document, Cruz said he witnessed the Court as it “repeatedly insulted my lawyers throughout the trial and has caused me to believe it is biased against me and my lawyers.”

“I will not receive a fair trial,” Cruz said more bluntly.  “I do not believe that the Judge will perform her duties impartially and diligently.”

Cruz, a former student, attacked the Marjory Stoneman Douglas High School in Parkland, Florida, on Feb. 14, 2018. By pleading guilty, he admitted admitted he armed himself with a semiautomatic rifle, killed 17 people, and injured several others. The state refused to budge on the death penalty — thus paving the way for the current penalty phase of the case.

The complete motion and Cruz’s attached affidavit are below:

[Editor’s note: this piece has been updated from its initial publication to correct a typographical error.]