After Lori Vallow Smiles in Court, Judge Bans Television Cameras Due to ‘Detrimental Impact on Selecting an Impartial Jury’ 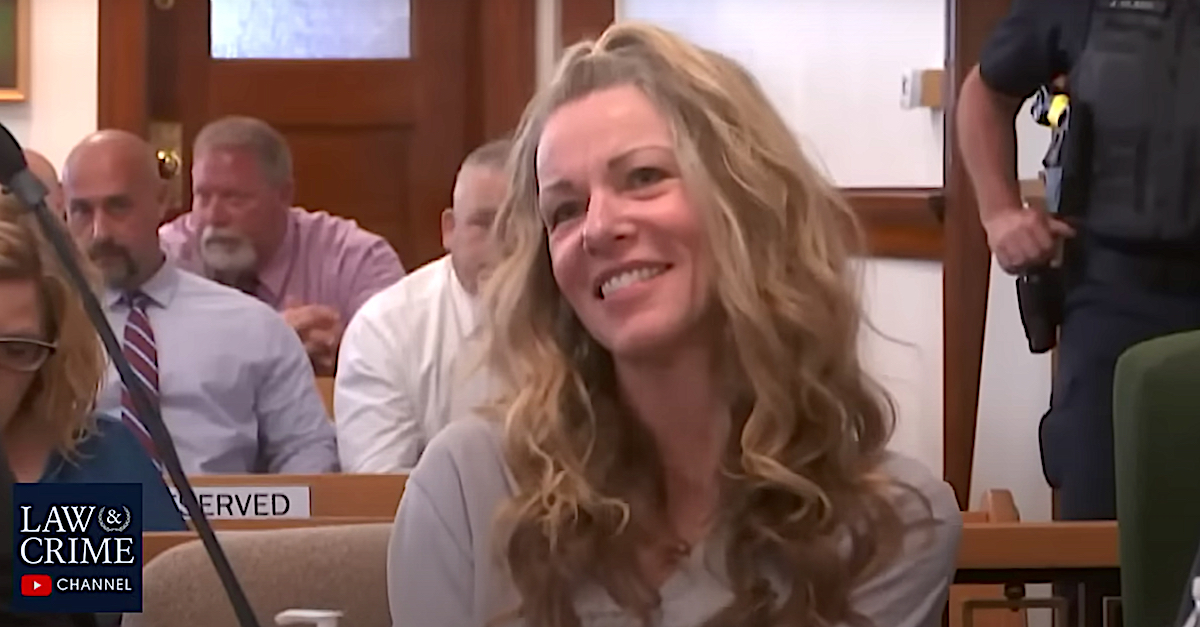 Lori Vallow smiled in court several times during an Aug. 16, 2022 pretrial hearing. (Image via screengrab from the Law&Crime YouTube Channel.)

An Idaho judge on Friday banned television and still cameras from court proceedings involving a so-called doomsday cult mother accused of murdering two of her children.

In an eight-page memorandum decision and order, Idaho District Court Judge Steven W. Boyce ruled that Lori Vallow Daybell’s Sixth Amendment rights were in jeopardy due to the highly saturated coverage of the case.

Vallow Daybell’s attorneys requested the clampdown on Aug. 30. Prosecutors agreed with the defense on Sept. 12 that cameras should be banned from the closely watched case.

“A sacrosanct protection of the penal system in the United States of America is the insistence of a fair trial by an impartial jury to those accused of even the most severe crimes as set forth in the Sixth Amendment,” Boyce wrote.

The judge noted that the case has “garnered significant media attention worldwide” and has attracted a “deluge of publicity.”

The case was already transferred from Fremont County, Idaho, where the alleged crimes occurred, to Ada County, Idaho — “the most populous county in the state” — in order to “mitigate the effects of pretrial publicity and its detrimental impact on selecting an impartial jury.”

Elsewhere in the decision and order, the judge balked that television coverage necessitated the move of the case to a new county where the “local citizens . . . who bear the cost of this case” would no longer had the ability to easily attend the proceedings in person “without inconvenience.”

The judge noted that there was “no indication” that any media organization had ever violated his previous orders in either the Vallow Daybell murder case or a “companion case” against co-defendant and husband Chad Guy Daybell.

The married couple is charged with first-degree murder and conspiracy to commit first-degree murder in the deaths of Lori’s children Tylee Ryan, 16, and JJ Vallow, 7. They also face murder charges connected to the death of Tammy Daybell, Chad’s former wife. Each of the defendants also faces other charges as well; some are in other jurisdictions.

Boyce went on at length as if to clarify that the issue was with the potential effects of the coverage and not with the actual conduct of the press in court:

The court has likewise witnessed no misconduct on any part of the media during hearings in these cases. The presence of media during the hearings has in no way interrupted those proceedings, and attending media have been respectful and professional. Notwithstanding, the Court determines that the concerns raised in the Defendant’s MOTION TO CLARIFY MEDIA IN THE COURTROOM and the State’s CONCURRENCE are well founded.

However, citing complaints from Vallow Daybell’s defense, the judge did say that footage of an Aug. 16 hearing “demonstrates an inordinate focus on the Defendant” because the camera was “zooming onto her face throughout the vast majority of the hearing, regardless of who was speaking or what was happening.”

Some of the camerawork may have been the result of Vallow Daybell’s arguably flippant yet noticeably frequent decision to smile, smirk, and perhaps even giggle during the Aug. 16 proceedings. Her conduct attracted scorn from many who viewed the proceedings on the Law&Crime Network’s YouTube channel. The judge’s aforementioned description of the coverage did not describe the defendant’s conduct; it only called out the way the television camera reacted to it.

Though the Law&Crime Network and its associated social media and streaming channels did carry coverage of the Aug. 16 pretrial proceeding in question, Law&Crime did not operate the pool camera shared by all media outlets. On that date, the camera was staffed by a competitor.

Vallow Daybell’s competency to stand trial was in question during earlier proceedings; however, she has since been treated and was adjudicated competent to face the charges against her.

Further along in his decision and order, the judge said he feared the “potential loss” of witnesses who could be “tainted by viewing the trial proceedings before they testify.”

He also feared that witnesses and attorneys will feel “pressure . . . knowing their every expression, utterance and appearance will be captured and circulated without their control in perpetuity” — something he considered an “unwarranted” interference with justice.

Additionally, the judge said he feared jurors might make decisions based on matters discussed during televised pretrial hearings and not the evidence presented during a future trial.

Citing the seminal U.S. Supreme Court case of Nebraska Press Association v. Stuart (1976), the judge said the “sensational” nature of the allegations and the “tone and extent of the publicity” created a “tension” between the First Amendment rights of the press and the Sixth Amendment rights of the defendant. Due to the liberty interests at stake — e.g., the possibility of incarceration and the death sentence for the defendant versus the burden of covering the case without cameras for the press — the balance tips in favor of the defendant, the judge concluded.

Again, from the decision and order:

While the right to public access must be protected, the scope of the coverage cannot supersede the rights of all parties to the fair administration of justice in this case. Courts have historically struggled with the issue of permitting cameras in the courtroom. Going back decades, cases have been overturned by the U.S. Supreme Court because of issues relating to extensive media coverage. In this day and age, the problem is further exacerbated, where instantaneous access to coverage provided by traditional media outlets is quickly rebroadcast, repackaged, and reimagined. The Court has previously been made aware and continues to be informed that documentaries, dramatizations and fictionalized movies focusing on the Defendants allegations in this case have already been produced and continue to be disseminated to the public. All of this continues to occur in a case which has not yet been tried.

The Court is concerned that continued visual coverage of this case will impede the ability of the parties to select fair and unbiased jurors. While the Court has refrained from delving into viewing the coverage in this case, the coverage is so extensive the Court has had to proactively avoid viewing it, as it is routinely part of local, and at times, national news.

The judge said the limiting, restricting, or prohibiting television coverage was within his discretion under Idaho court rules and that continued coverage of the matter “poses a great risk to the fair administration of justice.”

“Therefore,” he wrote, “visual coverage will no longer be permitted.” Video and still photos are included in the ban. The judge did write that audio recordings of the case would continue to be made using court personnel to operate an in-house audio system.

The ban extends to “all future pre-trial motions” and to the trial of Vallow Daybell itself.

Due to the change in venue, the judge said he would set aside seats in the courthouse for the use of residents from Fremont and Madison Counties who may wish to attend.  It is unclear if that move may effectively limit seating for journalists in the courtroom. The judge did point out that the press has a First Amendment right to attend the proceedings, but the right to attend and to report on the case does not necessarily extend so far as the inclusion of cameras, the judge noted.

The full document referenced herein is embedded below:

The full Aug. 16 proceeding is here: