‘This Is Not a Political Trial’: Judge Asks Kyle Rittenhouse Prosecutor Why He Probed Bias of ‘Commentator’ Who Flew in to Record ‘ANTIFA’ in Kenosha 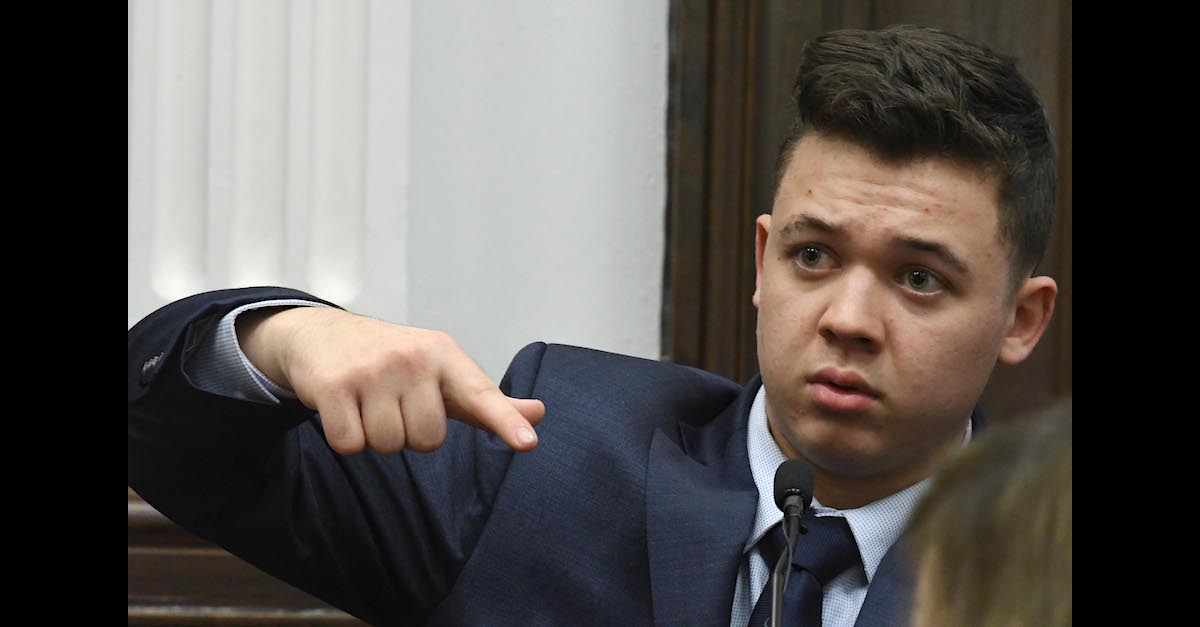 A self-styled “commentator” and “journalist” for Real America’s Voice who traveled from his home in Arizona in August 2020 to document “ANTIFA” and other “rioters” in Kenosha, Wis., testified for the defense in the Kyle Rittenhouse intentional homicide trial on Thursday.  During a cross examination by lead prosecutor Thomas Binger, the judge overseeing the matter declared that the case was “not a political trial” and questioned the prosecutor about why he wished to probe the witness’s possible biases.

On direct examination by Rittenhouse’s attorneys, Drew Hernandez testified that he gathered facts and gave opinions on his own website back in August 2020 but has since been hired by Real America’s Voice. (He didn’t mention it as a witness, but Real America’s Voice disseminates ex-Donald Trump chief strategist Steve Bannon’s podcast “War Room,” a show currently being scrutinized by congressional investigators looking into the Jan. 6 attack on the U.S. Capitol.) Hernandez’s YouTube channel contains rants against critical race theory and the mandatory masking of children. They also contain discussions about “Let’s Go Brandon!” (a euphemism for “Fuck Joe Biden!”). A pinned tweet on Hernandez’s Twitter page purports to “dismantle the stupid little ‘BLM is mostly peaceful’ narrative in 1 minute.” The pinned tweet contains video from an appearance on the RT network — which is owned and paid for by the Russian government.

Elsewhere, he posted — apparently gleefully — that “LEFTISTS” were “FREAKING OUT” about Latino voting trends (emphasis in original) and proclaimed that “BIDEN IS WEAK” (again, emphasis in original). He also said a “WOKE MLB” was to blame for pulling this year’s all-star baseball game out of Atlanta, Ga., and bemoaned that teachers were allegedly trying to “deny the existence of Jesus Christ, then turn around and redefine Him” as “bi sexual and non binary” — a move he called “BLASPHEMY.” He further decried what he believed were instances of discrimination against white people and complained about “Black privilege.”

Hernandez has also linked himself to the Jan. 6, 2021 siege on the U.S. Capitol.

DC: The F*CK ANTIFA flag is being flown high and proud on the Washington Monument grounds ahead of President @realDonaldTrump speaking at the “Save America March” #tatumreport#drewhernandez #January6th pic.twitter.com/z40fygFCDv

DC: Patriots storm the capital of the USA #Tatumreport pic.twitter.com/rHZi02k32S

He is said to have issued a fiery nearby speech that caught some renewed attention after his testimony.

Shortly before Jan 6th. Drew Hernandez called for “bloodshed” and a “second civil war” at a rally with J6 organizer Ali Alexander. pic.twitter.com/Pwuk94xKzF

Hernandez testified that Rittenhouse tried to “de-escalate the situation” in Kenosha and was “successful because the rioters disbursed” from one area he saw Rittenhouse visit.

He said Joseph Rosenbaum, the first person Rittenhouse shot, was “triggered” and “led the charge” into a gas station to presumably commit further destruction. Hernandez echoed the testimony of previous witnesses that indicated Rosenbaum was yelling “shoot me, n-word” in what he described as an attempt to provoke physical confrontations.

“Rosenbaum was charging Kyle Rittenhouse from behind” when a gunshot went off, Hernandez said. (It’s since been identified as a gunshot fired by Joshua Ziminski.) 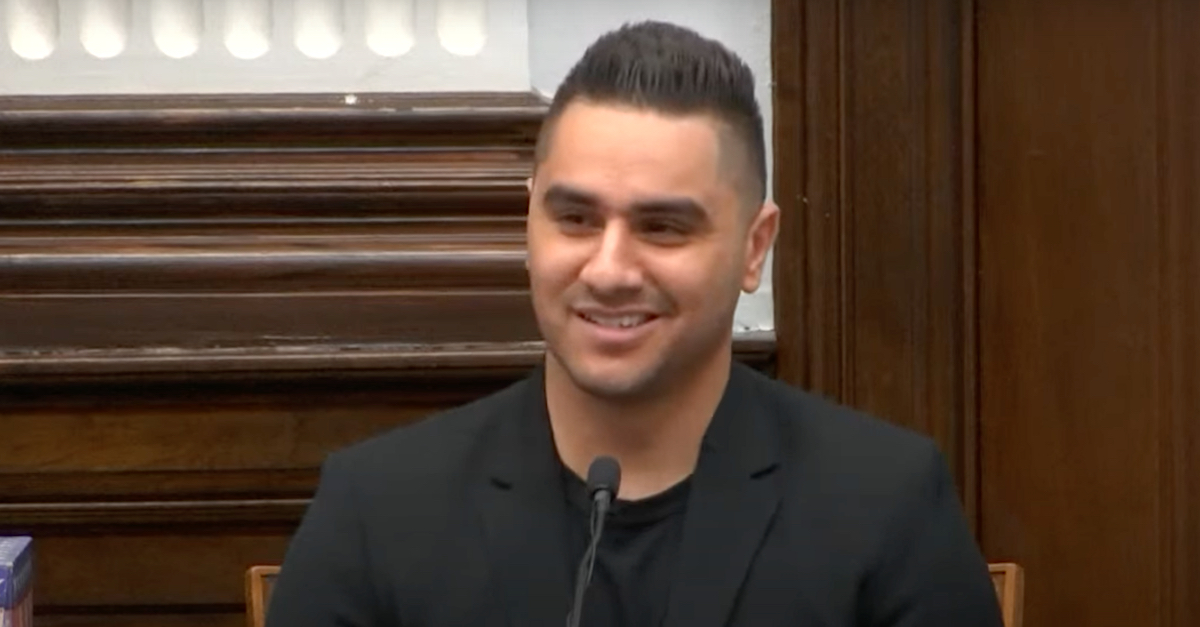 Drew Hernandez smirks as he testifies in the Kyle Rittenhouse intentional homicide trial. (Image via the Law&Crime Network.)

On cross examination, Hernandez again asserted that “violent riots” by “Black Lives Matter supporters” and “ANTIFA” were happening in Kenosha. He said he traveled around the country to document other protests in other cities in 2020.

“Does Real America’s Voice have any sort of political bias or agenda or anything like that?” Binger asked.

Judge Bruce Schroeder jumped in to ask the relevance of the question. Binger said he was attempting to probe the potential bias of the witness.

“This is not a political trial,” Schroeder said. “And, um, I don’t know how you would isolate a person’s particular politics and determine that that person is going to evaluate the evidence one way or another.”

Binger said he would move on; the witness said he saw “a very violent riot” unfolding in Kenosha when he arrived.

Binger then asked the witness how he recorded the events. The witness said he carried a cell phone and wore a body camera; both were recording at once.  Binger tried to ascertain when the video provided by the witness cut from one recording device to another. Hernandez said the video showed the “same exact event” and that he provided everything he had to the state and to the defense. After a somewhat testy back and forth, Hernandez said he edited some of the material and showed the jury precisely where he did so.

The judge jumped in and asked Binger about the relevance of his line of questions. Binger again responded that he was trying to probe the witness’s credibility — especially considering the witness provided some edited video of the events.

After allowing the jury to break for lunch, Binger noted to the judge that Hernandez was represented by the same law firm that represented one of the Rittenhouse defense team’s expert witnesses.

The defense said the connections to the law firm should not be interpreted as bias. The defense admitted that it asked the sole survivor of Rittenhouse’s gunfire — Gaige Grosskreutz — about hiring attorneys to file a $10 million lawsuit. The defense argued that the lawsuit was evidence of Grosskreutz’s bias but said that Binger’s questioning of Hernandez about his attorneys was off-base.

Schroeder said he was “assuming” Hernandez hired an attorney because “he’s a businessperson” who was worried about copyrights or other “business interests.” According to the discussion in court, the firm facilitated the disclosure of Hernandez’s videos, but the full nature of its representation of Hernandez was not fully explained or probed in court on Thursday by any of the parties present.

Raising chain of custody concerns, Binger said Hernandez’s lawyer was the intermediary who provided some of Hernandez’s video evidence to the state.  He said the witness provided some material but that a “whole bunch more” was submitted through Hernandez’s counsel — thus raising questions about why the same law firm was involved with both the witness and the defense expert.

Schroeder said he would “probably” allow the testimony but wasn’t sure if it would “get us something of value.”

“But, um — I’ll permit it,” Schroeder said in his usual, tepid way when asked to rule on an evidentiary dispute.  “I think. Somewhat.”

The judge’s thoughts then turned to the upcoming lunch break — including the type of food that had been ordered and when it might arrive.

“Hope the Asian food isn’t coming — isn’t on one of those boats in Long Beach Harbor,” the judge said with reference to lunch. He appeared to be referencing an ongoing supply chain issue in California.

After lunch, Hernandez testified that his selection of a specific lawyer didn’t prove he was biased because he first learned of his law firm’s connection to another defense witness on Thursday.

Binger then asked Hernandez why he posted “videos on social media in support” of Rittenhouse.

“What would you say is that?” Hernandez said — thus arguing with the prosecutor. “I’d like to hear it.”

After some discussion, Binger reminded Hernandez he was “under oath.”

Schroeder said Binger couldn’t use that as a “preface” to his questions because it implied that the witness was lying.

Binger again asked the witness if he posted things to support Rittenhouse.

“One could argue yes,” Hernandez said.