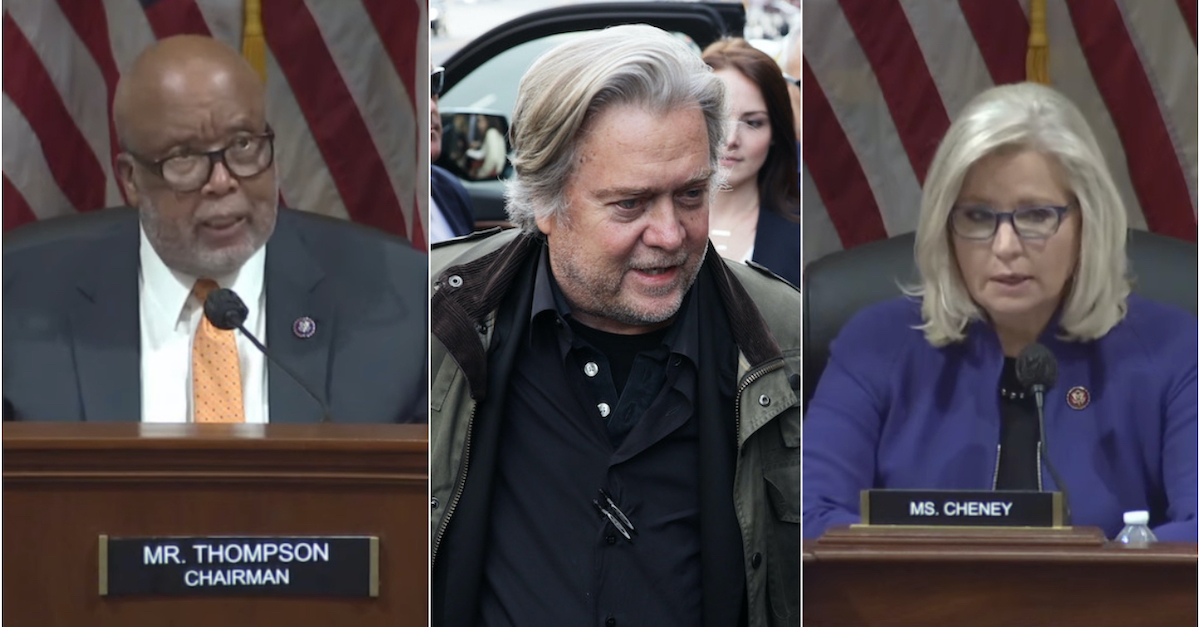 The Select Committee to Investigate the Jan. 6 Attack voted on Tuesday evening to advance a contempt report against former President Donald Trump’s former chief strategist Steve Bannon for defying their subpoena for information “critical” to their probe.

“Let me start by saying that it gives me no joy that I’ve been forced to call this meeting,” Thompson began.

Following brief opening remarks in a meeting that lasted roughly 30 minutes, the committee voted unanimously in favor of the contempt report, by a 9-0 margin.

Released on Monday evening, the committee’s report extensively quotes Bannon predicting the melee greeting the congressional certification of President Joe Biden’s electoral victory to his podcast listeners the day before the siege of the U.S. Capitol.

“All hell is going to break loose tomorrow,” Bannon declared on his podcast “War Room” on Jan. 5.

“You all know that there is no evidence of widespread election fraud sufficient to change the results of the election,” Cheney said, addressing her Republican colleagues.

“You all know that the Dominion voting machines were not corrupted by a foreign power,” she continued. “You know these claims are false. Yet, former President Trump repeats them almost daily, and he has now urged Republicans not to vote in 2022 and 2024. This is a prescription for national self-destruction.”

Both the chair and vice chair said Bannon’s remarks suggested foreknowledge of the Jan. 6 attack.

“So many people said, ‘Man, if I was in a revolution, I would be in Washington,’” Bannon added later. “Well, this is your time in history.”

The former CEO of Trump’s 2016 campaign, Bannon also briefly served as the ex-president’s chief White House strategist. Trump gave him an 11th hour pardon on allegations that Bannon defrauded donors of a crowdfunding effort to build a wall on the U.S.-Mexico border. Prosecutors said that Bannon pocketed $1 million from the charity, named We Build the Wall, which purported to spend every penny on construction.

Though apparently rewarded by Trump for his loyalty, Bannon could face more legal hot water for his intense support of the former president.

“If any witness so close to the events leading up to the January 6th attack could decline to provide information to the Select Committee, Congress would be severely hamstrung in its ability to exercise its constitutional powers with highly relevant information informing its choices,” the contempt report states. “Information in Mr. Bannon’s possession is essential to putting other witnesses’ testimony and productions into appropriate context and to ensuring the Select Committee can fully and expeditiously complete its work.”

Citing public reporting, the Jan. 6 Committee noted that Bannon was one of several Trump loyalists to have converged at Willard Hotel—an establishment blocks away from the White House—in the days surrounding the siege of the U.S. Capitol.

“In short, Mr. Bannon appears to have played a multi-faceted role in the events of January 6th, and the American people are entitled to hear his first-hand testimony regarding his actions,” the contempt report states. “The Select Committee expects that such testimony will be directly relevant to its report and recommendations for legislative and other action.”

Now that the committee has approved the report, the Democratic-dominated House of Representatives will vote on it next—reportedly on Thursday. Should that body adopt it, Speaker Nancy Pelosi (D-Calif.) would certify it for the U.S. Attorney’s office for the District of Columbia. According to the relevant statute, that prosecutor’s office would have the “duty” to “bring the matter before the grand jury for its action.”

Despite the seemingly mandatory language, the Congressional Research Service reported that the Justice Department historically viewed such a referral as advisory.

“It remains unclear whether the ‘duty’ of the U.S. Attorney to present the contempt to the grand jury is mandatory or discretionary,” the agency’s 2017 report states.

Since the Jan. 6 Committee first signaled its criminal contempt referral plans, Trump ratcheted up his offensive against the investigative body. Trump sued the Committee, Rep. Thompson, the National Archives, and Archivist David Ferriero in Washington, D.C., attempting to block the subpoena. Bannon tried to delay the committee’s meeting in light of the lawsuit, but Thompson called that litigation “irrelevant.”

Read the contempt report below:

(Photos of Reps. Thompson and Cheney via YouTube screengrab; Photo of Bannon by Alex Wong/Getty Images)