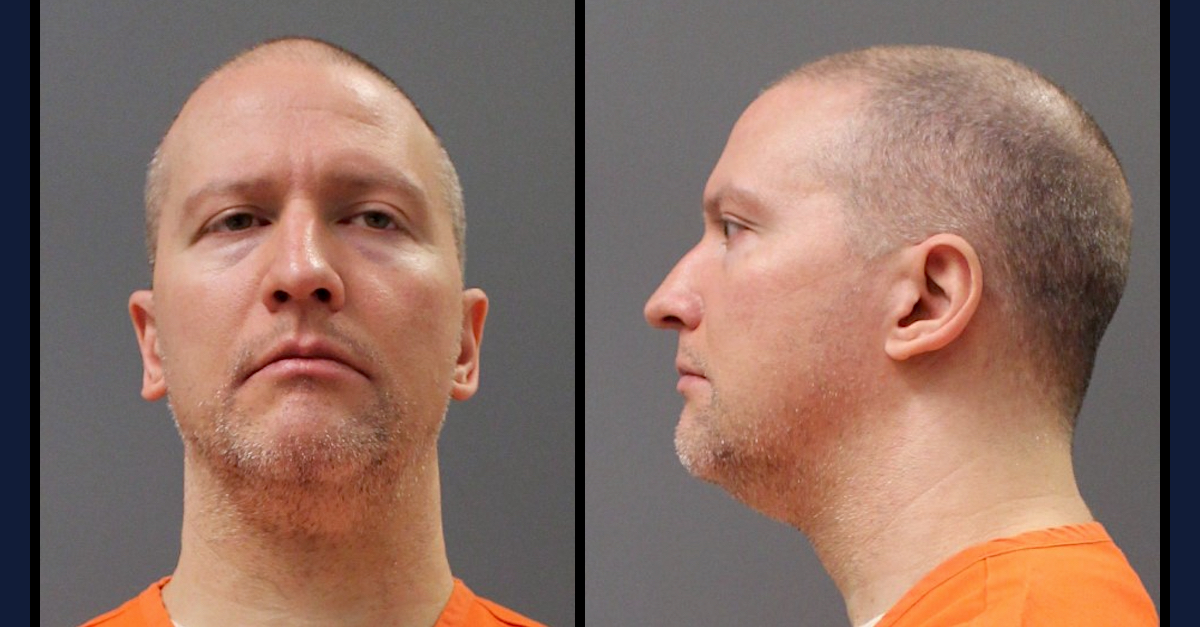 Chauvin, now 46, was previously convicted in state court on April 20, 2021 of second-degree murder, third-degree murder, and second-degree manslaughter in the death of George Floyd, Jr.  After his televised state-level trial, Chauvin was sentenced on June 25, 2021 to 22.5 years in a Minnesota state prison facility for murdering Floyd.

Chauvin was accused by federal prosecutors of violating Floyd’s civil rights during the now-infamous and fatal May 25, 2020 encounter which led to nationwide protests.  Chauvin was also accused federally of violating the civil rights of an unnamed Black juvenile in 2017.  Chauvin pleaded guilty via an agreement filed Dec. 15, 2021, to two counts of depravation of rights under color of law — one count for each victim.  U.S. District Judge Paul Magnuson accepted the plea on May 4, 2022.

The federal sentence handed down on Thursday is therefore roughly congruent with Chauvin’s state-level murder sentence, though distinctions between federal and state parole and home confinement rules will eventually affect how Chauvin serves the later portions of his sentences.

The full federal sentence from here on out will be 245 months behind bars, Magnuson noted on Thursday.  The judge gave Chauvin credit for several months already served behind bars.

“I really don’t know why you did what you did,” Magnuson said to Chauvin on Thursday, according to a media pool report on the proceedings.  “But to put your knee on another person’s neck until they expire is simply wrong, and for that conduct you must be substantially punished.”

“Your conduct is wrong and it is offensive,” the judge continued.  “To place a knee on another person’s neck is unconscionable. Also to hit a young man with a flashlight is wrong. For those actions you must be held accountable.”

The flashlight incident involved the 14-year-old who Chauvin admittedly victimized in 2017.

The judge further ordered Chauvin to pay fines out of his prison wages.

When Chauvin is released from federal custody, he will serve five years on supervised release, Magnuson said.

As Law&Crime has previously noted, Chauvin’s plea agreement with federal prosecutors was a legally rare “C” plea — so named after Rule 11(c)(1)(C) of the Federal Rules of Criminal Procedure.

So-called “C” pleas are negotiated between prosecutors and defendants.  They generally afford judges little — if any — discretion at sentencing.  (Chauvin’s “C” plea gave Judge Magnuson at least a small amount of discretion, perhaps to entice the judge to accept it.)  Magnuson’s acceptance of Chauvin’s negotiated “C” plea — which allowed Chauvin to basically choose his own sentence in conformity with the possible penalties afforded by federal law — was a major victory for his defense.

Most federal plea agreements are “B” pleas — again, named after Rule 11(c)(1)(B) — where prosecutors “recommend” a certain sentencing range for a judge to consider or otherwise agree not to oppose a sentencing range recommended by the defense; “B” pleas give judges considerably more discretion at sentencing.

Some federal judges have rejected “C” pleas outright because they limit the court’s role at sentencing. Cases so rejected usually go back to the proverbial legal drawing board.

As Law&Crime previously reported, Chauvin’s federal plea agreement document requested a punishment term of somewhere between 20 and 25 years.  Since the judge accepted the agreement, he was bound to those terms.  The prison portion of that term was contemplated to last somewhere between 204 and 255 months (or 17 years and 21 and one-quarter years) behind bars.  The rest of the sentence could, according to the plea document, potentially be served via some other mechanism, such as (perhaps) home detention.

During last December’s plea hearing, Judge Magnuson reminded Chauvin that he could have faced a life sentence had he taken the federal case to trial and subsequently been convicted.

Therefore, though Chauvin’s federal sentencing range and his state-ordered sentence were roughly congruent, the federal penalty is likely to add at least some prison time onto his state-ordered period of confinement.

Minnesota Attorney General Keith Ellison, whose office prosecuted Chauvin at the state level but obviously not at the federal level, reacted by calling the federal sentence “substantial.”

“Federal prosecutors took this case because it was not a typical crime: it was an intentional deprivation of life and liberty that is criminal under federal law, so it was appropriate and right that they stepped in,” Ellison said in a statement provided to Law&Crime.  “In obtaining this conviction and sentence, they sent a message to Minnesotans, all Americans, and law-enforcement agencies around the country that crime like this will not be tolerated and that we must do better.”

Ellison identified the teen involved in the 2017 incident as Jonathan Pope.

[This story has been updated after its initial publication to contain additional details from the proceeding.]