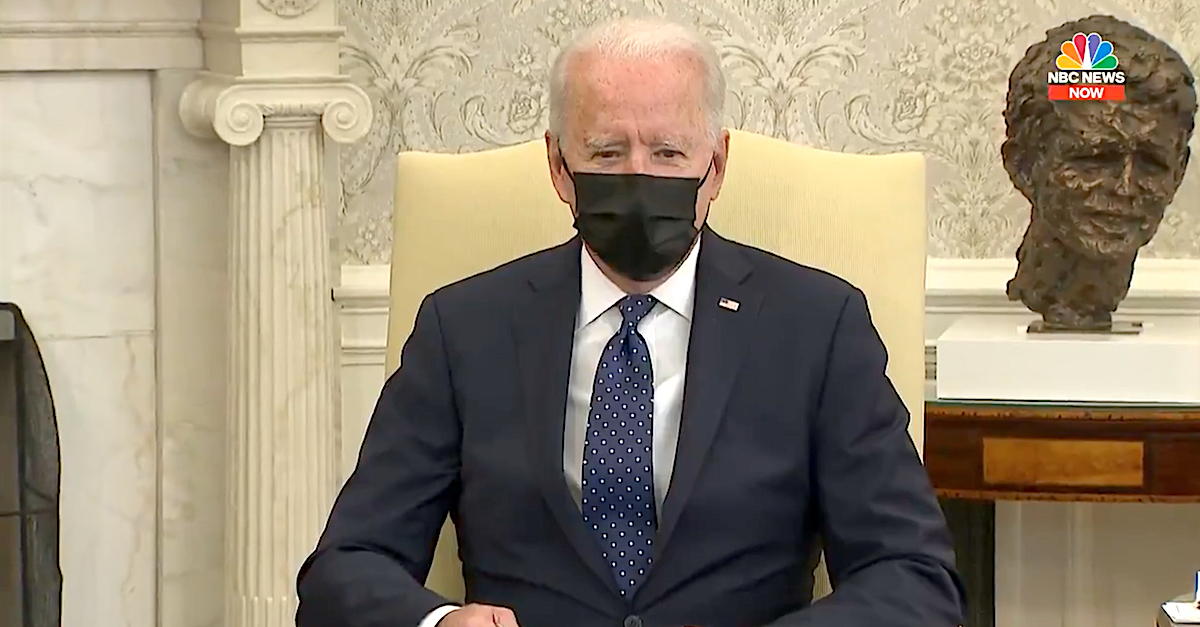 President Joe Biden (D) on Tuesday ignored the advice of the judge overseeing the murder trial of former Minneapolis Police Officer Derek Chauvin and commented on the case as the jury was deliberating.

In recorded remarks, Biden said he was “praying the verdict is the right verdict” in the first trial seeking to assign criminal legal blame for the death of George Floyd, Jr.

“It’s overwhelming in my view,” the president said of the outcome. “I wouldn’t say that unless the jury was sequestered now,” he added.

BREAKING: President Joe Biden says he is praying for the “right verdict” in the Derek Chauvin trial and said that he believed the case to be “overwhelming.” https://t.co/C4KQm3Vn0W

Biden said he called George Floyd’s family yesterday and engaged in a “private conversation.” He reiterated that the Floyd family called for “peace and tranquility not matter what that verdict is.”

“I wanted to know how they were doing personally,” the president said. “We talked about personal things.”

After phone call with George Floyd’s family, President Biden says he is “praying the verdict is the right verdict,” adding that he is only speaking out because the jury is sequestered. https://t.co/zstpyxCqRk pic.twitter.com/RcrACo79DU

“I wish elected officials would stop talking about this case, especially in a manner that is disrespectful to the rule of law and to the judicial branch and our function,” Cahill said. “I think if they want to give their opinions, they should do so in a respectful and in a manner that is consistent with their oath to the Constitution.”

Rep. Marjorie Taylor Greene (R-Ga.) said she would introduce a resolution to expel Waters over the comment.

Also yesterday, White House Press Secretary Jen Psaki suggested the White House was going to stay quiet about the legal issue of Chauvin’s guilt or innocence as deliberations were ongoing. This was her response to a question about whether the federal government was helping local officials prepare for possible violence — if any — when the verdicts were read:

We — what I can say is, broadly speaking, we are in touch with mayors, governors, local authorities. Of course, our objective is to ensure there is a space for peaceful protest; that, you know, we encour- — we continue to convey that while this country has gone through an extensive period — especially the Black community — of pain, trauma, and exhaustion, as we’ve watched these — not just the trial, but, of course, additional violence against their community over the past several weeks, we — it’s important to acknowledge that and elevate that at every opportunity we have.

But in terms of your question, Jonathan, we’re in touch with local authorities. We’re in touch with states, with governors, with mayors. And certainly, you know, we will continue to encourage peaceful protests, but we’re not going to get ahead of the verdict in the trial.

Psaki backtracked Tuesday by suggesting Biden’s comments were okay given that the jury was sequestered.

CNN’s Kaitlan Collins calls out Psaki for having said yesterday the WH wouldn’t get ahead of deliberations, but now Biden has joined Maxine Waters in demanding a specific outcome.

Psaki says it’s okay b/c the jury is sequestered and there must be “space for peaceful protest.” pic.twitter.com/dI0Org7OcY

Biden’s comments were roundly criticized by legal observers of many different political stripes — and especially by conservatives. Here’s a roundup of some of the reaction:

No sitting President should be publicly weighing in on how a jury should rule in a pending criminal matter. No president, liberal or conservative, democrat or republican.

Uh, Biden said he was waiting till the jury was sequestered to comment. How about waiting until after the verdict? https://t.co/xw47f2Yrxt

Uh, Biden said he was waiting till the jury was sequestered to comment. How about waiting until after the verdict? https://t.co/xw47f2Yrxt

This is a remarkable statement from a sitting president on a criminal trial currently underway:

“I’m praying the verdict is the right verdict. The evidence is overwhelming in my view,” President Biden just now in the Oval.

RIP due process. The judge needs to declare a mistrial. https://t.co/owAVZYGypo

The other reason Biden should have kept his mouth shut. https://t.co/94DUzLMauv

Does no one have a sense of restraint anymore? https://t.co/kEQbqIfRh1

It would of course be hard to show that Biden’s remarks or Water’s remarks influenced the jury … but it is seeming increasingly possible that a guilty verdict could be overturned b/c of the judge’s decision not to sequester the jury from the outset. SMH.

Below is the core text of what Biden said:

I’ve come to know George’s family, uh, not just in passing.  I’ve spent time with them.  I’ve spent time with his little daughter, Gianna — you should see this beautiful child, oh!  And, uh, his brother, both brothers, as a matter of fact.  And, uh, so, um, I can only imagine the pressure and anxiety they’re feeling, and so, uh, I waited until the jury was sequestered, and, uh, and I called.  And, as, I wasn’t going to say anything about it, but, as Philonise said today on television, they accurately said, it was a private conversation, because, uh, Joe understands what it’s like to go through loss.  And, um, they’re a good family, and they’re calling for peace and tranquility no matter what that verdict is.  I’m praying the verdict is the right verdict; which is — it’s overwhelming in my view.  I wouldn’t say that unless the — the jury was sequestered.