‘The Laundries Did Not Help Us Find Gabby’: Petito Family’s Lawyer Calls Out Brian Laundrie and His Family Over Their ‘Silence’

The lawyer for the grieving family of Gabby Petito, 22, had some pointed words on Tuesday for the parents of the slain TikTok star’s missing boyfriend Brian Laundrie, 23.

“We haven’t heard from the Laundrie family,” a reporter said during a press conference in Bohemia, N.Y. before asking her question. “We haven’t been able to hear much from the FBI–they can’t share a lot with us about Brian’s whereabouts. Is there anything that you can tell us about the efforts to find him, what the family thinks about where he might be, and the Laundrie family’s silence?”

That question was fielded by Petito family attorney Richard B. Stafford, whose practice is located in Suffolk County, Long Island, N.Y. 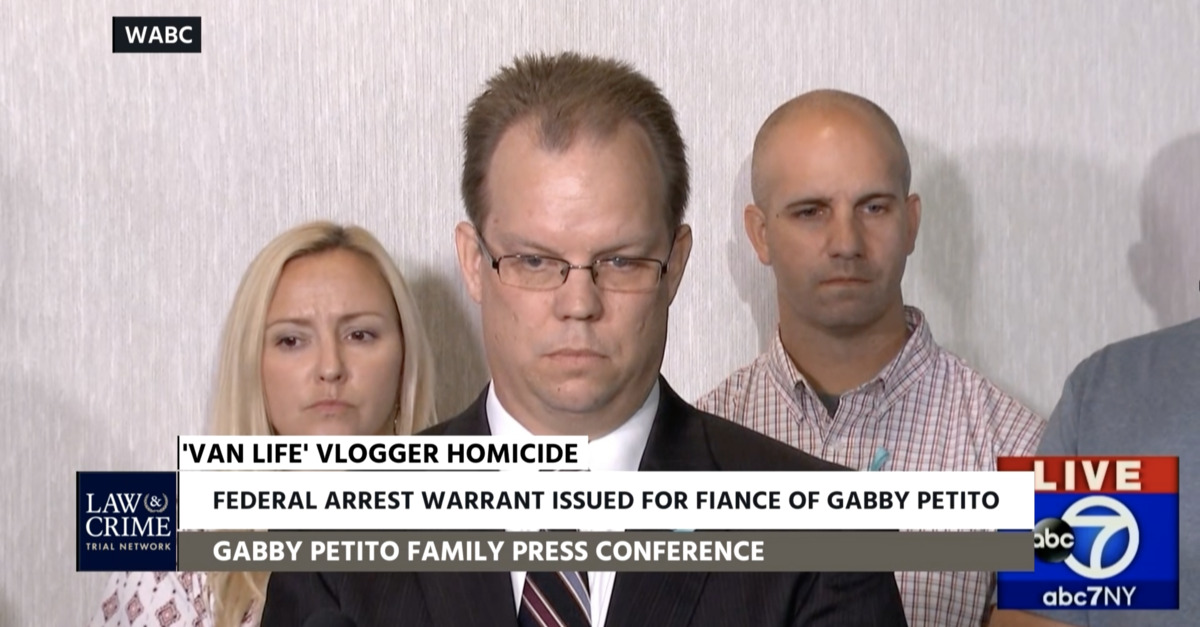 “Again,” the attorney said. “For the Laundries’ silence: The Laundries did not help us find Gabby. They sure [are] not going to help us find Brian. For Brian: We’re asking you to turn yourself in to the FBI or the nearest law enforcement agency.”

While the Laundrie family have largely remained mum about the nationwide missing person-turned-homicide case involving their “Van Life” vlogger son and his deceased girlfriend, the missing (or hiding) man’s parents on Monday said through an attorney that they did not help their son dodge authorities.

“Chris and Roberta Laundrie do not know where Brian is. They are concerned about Brian and hope the FBI can locate him,” Laundrie family attorney Steven Bertolino said. “The speculation by the public and some in the press that the parents assisted Brian in leaving the family home or in avoiding arrest on a warrant that was issued after Brian had already been missing for several days is just wrong.”

Presented with that denial, Stafford was asked outright by another member of the news media whether or not he “believed them.”

“That’s for the FBI to investigate,” the attorney said. “I believe that they’re the preeminent law enforcement organization in this country and I know they are investigating all avenues of this case.”

During the press conference, which ran somewhat shy of thirty minutes, Stafford was flanked by Gabby Petito’s father Joseph Petito and her mother Nicole Schmidt – each of whom discussed the start of a foundation named in their daughter’s honor and dedicated to finding missing persons.

“We’re just hoping that through our tragedy losing Gabby, that in the future, some good can come out of it, that we can help other people who may be in a similar situation,” Gabby’s stepfather Jim Schmidt told reporters. “What can we do to help people?”

At the top of the nation’s mind is the state of the FBI’s investigation and the search for Brian Laundrie.

“You touched on trusting the FBI here,” a reporter for ABC News asked at one point. “Does it bother the family at all that Brian Laundrie’s still not named as a suspect in Gabby’s disappearance?”

“The parents are 100 percent happy with the FBI,” Stafford replied. “They’ve been with us every single step of the way. And we know that they will bring justice for Gabby.”

Laundrie has an arrest warrant out for debit card fraud after allegedly using his girlfriend’s Capital One card without authorization in excess of $1,000.

Earlier pressed to describe what justice might look like in the present situation, the attorney said he meant justice as it relates to the ongoing homicide investigation.

As the press conference drew to a close, another reporter asked about the Laundrie family yet again – seeking information about communication with them prior to the woman’s reported disappearance on Sept. 11 and what the Gabby and Brian’s relationship was like. Again, the familial inquiry received a terse stonewall.

Petito is believed to have been last seen alive in Grand Teton National Park in Wyoming. Laundrie returned home to North Port, Florida without her on Sept. 1–10 days before she was reported missing.