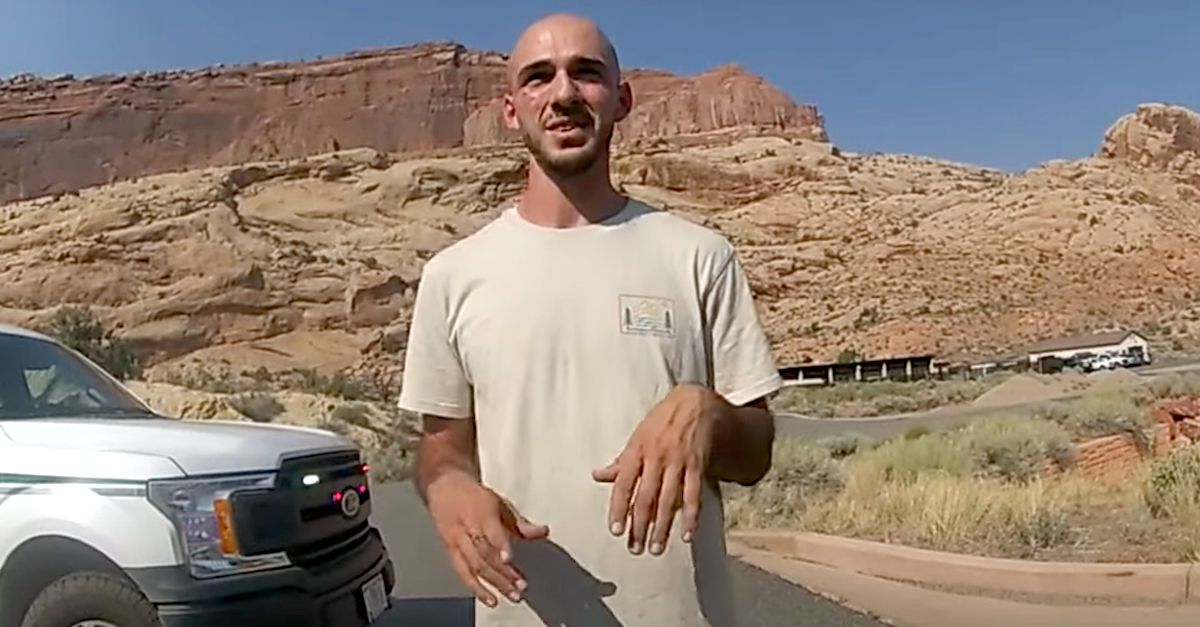 Federal authorities in Wyoming on Friday filed an “amended” arrest warrant for Brian Laundrie, the man whose girlfriend Gabby Petito was reported missing by her family while the duo was on a cross-country road trip.  Petito’s body turned up near a camping area in the Grand Teton National Park weeks later.  A coroner ruled Petito’s manner of death a homicide; the precise cause of her death has not been released.

To be clear, a grand jury indicted Landrie on one single count for allegedly violating 18 U.S.C. § 1029(a)(2).  That statute makes it a crime to use an “unauthorized access device” (e.g., a debit card) and to “obtain[] anything of value aggregating $1,000 or more.”  More precisely, the indictment accuses Laundrie of using a Capital One debit card and its requisite PIN to access more than $1,000 between the dates of Aug. 30 and Sept. 1.  The indictment says the alleged debits occurred “in the District of Wyoming and elsewhere.”

Law&Crime previously unpacked and explained the statute on Thursday evening when the indictment was unsealed.  There are several additional elements of the crime that prosecutors must prove beyond a reasonable doubt if they hope to obtain a conviction — assuming Laundrie is found.  He remains missing as of the time of this writing.

The indictment itself was unsealed only after federal and local enforcement sources began disseminating and publicizing the original arrest warrant issued by Chief U.S. Magistrate Judge Kelly H. Rankin of the District of Wyoming at the request of Nicole M. Romine, the chief of the criminal division in the U.S. Attorney’s Office in that same district.  A document called a “praecipe” — a request for a warrant — asked the clerk of the federal district court in Cheyenne, Wyoming, to issue the original warrant for Laundrie’s arrest.

The resulting warrant filed at 2:47 p.m. Wyoming time on Wednesday, Sept. 22 said Laundrie was accused of violating a neighboring but different statute — 18 U.S.C. § 1029(a)(1) — but it correctly stated that he was accused of a crime involving the “Use of Unauthorized Access Devices.” Section 1029(a)(1) actually involves the use or trafficking of “counterfeit access devices.” Laundrie was not indicted for allegedly making a fake debit card, even though the first warrant suggested he was.

The documents were all unsealed and disseminated in various waves on Thursday.  The confusion for a brief time led some observers to believe that Laundrie had produced some form of fake access device or debit card. The subsequent release of the actual indictment indicated he was not accused of committing that crime.

The second warrant accurately describes the proper charge as laid out in the indictment — an alleged violation of 18 U.S.C. § 1029(a)(2). The second warrant states that it was necessary “to correct incorrect statute on original arrest warrant due to clerical error.” The second and corrected warrant was filed on Friday at 2:31 p.m. Wyoming time.

Magistrate Judge Rankin signed both the first warrant and the amended warrant.

The North Port, Fla. Police Department said Friday evening that its officers would resume their search for Laundrie on Saturday. Efforts there continue to center on a sprawling wildlife refuge known as the T. Mabry Carlton Jr. Memorial Reserve.

If found, tried, and convicted, Laundrie faces a possible ten-year prison sentence and a fine of up to $250,000 in connection with his current single-count federal indictment in Wyoming.

Memorial services for Petito are scheduled for Sunday in Holbrook, Suffolk County, N.Y.  Holbrook is near Blue Point, N.Y., where Petito grew up on Long Island.

Read the two warrants and the indictment below: