‘I Don’t Want to Hear Hillary Clinton Again’: Judge and Alex Jones Lawyer Get into It After Jury Sent Out of Courtroom

An attempt by an attorney for right-wing broadcaster Alex Jones to inject politics into the cross-examination of a former FBI agent who responded to the Sandy Hook massacre led to a contentious exchange with the judge presiding over the case.

Ex-FBI agent Bill Aldenberg had been delivering hours of emotional testimony against Jones on Tuesday, stopping himself repeatedly when his voice started cracking. When Jones’s attorney Norm Pattis took over questioning, he veered toward a turning point in his client’s career: his endorsement and interview of former President Donald Trump.

Since Jones had peddled misinformation for decades about everything from the Oklahoma City bombing to the 9/11 attacks, it immediately sparked backlash, but Pattis’s questioning intimated that outrage over his client’s broadcasts calling Sandy Hook a “hoax” was all about election-year rhetoric. Judge Barbara Bellis quickly sustained one objection about the relevance of a question about Hillary Clinton.

Once the subject matter turned to Megyn Kelly’s interview of Jones on NBC News, the judge instructed the jury to leave the room and a blistering exchange followed. Pattis defended the line of questioning. 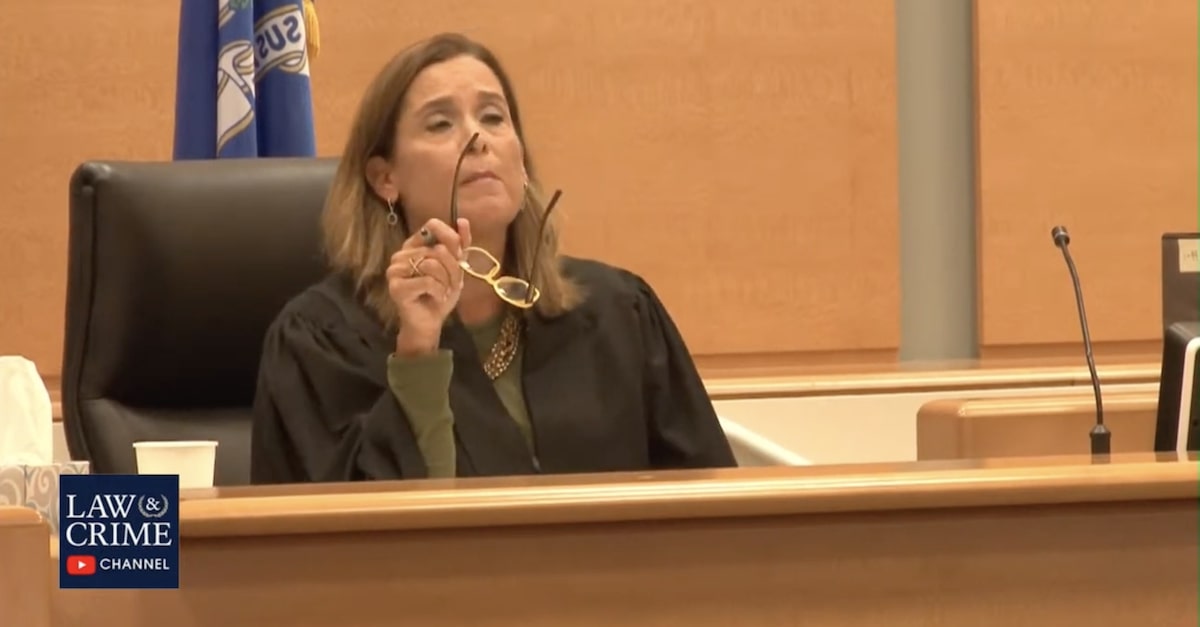 Judge Barbara Bellis gets in tense exchange with Alex Jones’s attorney Norm Pattis after the jury left the courtroom. (Screenshot via Law&Crime Network)

“It’s our contention that this issue was largely dead until Hillary Clinton made a campaign issue of it in 2016,” he told the judge, who indicated that the matter had been settled — and Pattis lost.

“I already ruled on the issue, and we’re moved on from that,” Bellis said. “So now, you just talked about Megyn Kelly. So let’s address Megyn Kelly.”

“With respect to Megyn Kelly, given the nature of the argument that the plaintiffs made here, it’s our contention we are entitled to put on exaggeration, as a defense,” Pattis said. “When Megyn Kelly and NBC did an interview with Jones in 2017, a number of Connecticut residents petitioned local affiliates to not air the 2017 interview with Jones. I want to know what this man [Aldenberg] is one of them.”

Attorney Chris Mattei, who represents Aldenberg and eight families of Sandy Hook victims, said that there was no good faith basis to ask that question and that Pattis had no evidence that his client was part of that group.

“The larger issue here, which is what attorney Pattis is trying to inject into this case is some sort of echo of what he made the centerpiece of his opening, which is that this lawsuit is an effort to silence Mr. Jones,” Mattei said. “He was trying to get in through Mr. Aldenberg that some unnamed group of people have been involved in sending a letter to NBC for one specific purpose: And that is to try and inject some sort of political argument to the jury, which is impermissible.”

Before trial began, Jones had three default judgments entered against him in Sandy Hook-related cases for failing to turn over discovery to the plaintiffs. That effectively meant that Jones had lost the cases before they began, and the juries’ sole task was to determine how much he owed in damages. A Texas jury already found Jones owed millions to two Sandy Hook parents. The Connecticut trial to determine what he owes eight other families and Alderman began Tuesday.

Carlee Soto Parisi, the sister of #SandyHook victim Victoria Soto, cried as she testified about looking for her sister, a teacher at the elementary school at the time of the shooting. pic.twitter.com/dSBBtPuz04

The day ended with testimony by Carlee Soto–Parisi, who wept as she recalled how she learned about the death of her sister Victoria Leigh Soto, a teacher at Sandy Hook elementary school who was one of the 28 people killed during the massacre. Trial continues on Wednesday.