On Amber Heard's Use of 'Fire in a Crowded Theater' Analogy 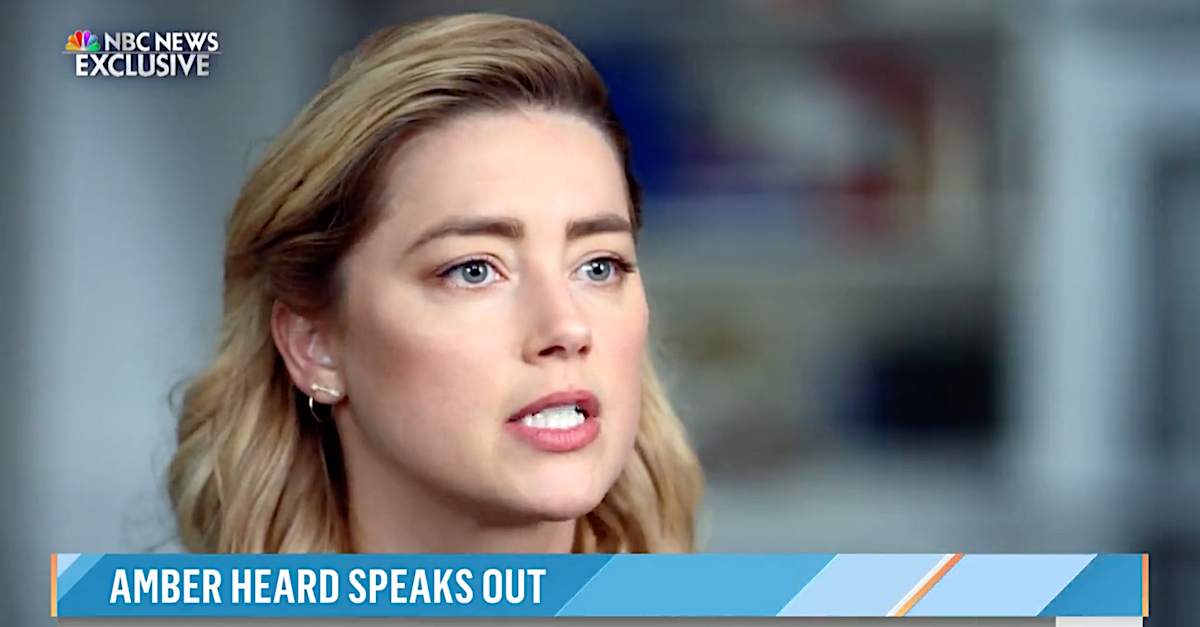 Actress Amber Heard, who largely lost a defamation battle against actor and ex-husband Johnny Depp, made a legally inaccurate statement about defamation law during an interview clip tweeted on Tuesday by NBC’s Today show.

Here’s the verbatim exchange between Heard, who is not a lawyer, and host Savannah Guthrie, who is a lawyer licensed to practice in Washington, D.C.:

Heard: “Yes, exactly. You can’t go into — free speech does not protect you if you, you know, go into a crowded theater and you scream ‘fire!’ We get the concept of free speech from the Greeks.”

[After an obvious edit by NBC, Heard continued.]

Guthrie: “But truth is the word.”

Guthrie: “And that was the issue.”

Heard: “And that’s all I spoke, and I spoke it to power, and I paid the price.”

As Law&Crime has pointed out ad nauseam, the often repeated phrase — “you can’t yell fire in a crowded theater” — is not legally accurate.

Let’s walk through the law. Under the First Amendment:

Congress shall make no law respecting an establishment of religion, or prohibiting the free exercise thereof; or abridging the freedom of speech, or of the press; or the right of the people peaceably to assemble, and to petition the Government for a redress of grievances.

The First Amendment has since been interpreted to limit broader swaths of the government than just “Congress.” Though government restrictions on speech have traditionally and generally been viewed with suspicion, the First Amendment is not absolute: the government can regulate certain types of speech, such as incitement to imminent lawless action, defamation, obscenity, child pornography, fraud, speech that violates intellectual property laws, “fighting words,” and certain threats.

Exactly what the government can and cannot regulate is naturally the subject of litigation, and the “fire in a crowded theater” trope unsurprisingly emanated from a First Amendment case. The analogy was penned by Justice Oliver Wendell Holmes, Jr. in Schenck v. U.S., a 1919 U.S. Supreme Court case which held that an individual could not hide behind the First Amendment to avoid punishment under the Espionage Act for leafletting against mandatory military conscription in times of war. Such speech, Holmes opined for the court, created a “clear and present danger” of “bring[ing] about the substantive evils that Congress has a right to prevent.”

The original anti-free-speech quote goes like this: “The most stringent protection of free speech would not protect a man in falsely shouting fire in a theatre and causing a panic” (emphases ours). The analogy is believed to have been a reflection on the Italian Hall disaster in Calumet, Michigan, on Christmas Eve in 1913. A packed house of as many as 600 Upper Peninsula copper miners and their families gathered to celebrate the holiday in the midst of a bitter labor strike by union members seeking eight-hour work days and three-dollar-per-day salaries (about $89 per day in June 2022). Someone — possibly an anti-union agitator or a member of mine management — yelled “fire,” and 73 people were trampled to death in a stairwell. Some 59 of the victims were children.

For starters, most people who misunderstand the original line — like Amber Heard — leave out the “falsely” and “causing a panic” parts of the Holmes quote. Those qualifiers are critical to understanding the issue. As a First Amendment matter, nobody would complain if someone yelled “fire” in a theater that was actually on fire and if a solemn and orderly exit ensued. Even Holmes acknowledged that First Amendment cases involve “a question of proximity and degree,” and the Calumet Hall disaster was an extreme example of speech gone awry.

But there’s another more serious problem with the fire/theater utterance.

As perhaps you guessed by the nature of anti-war speech in the United States since World War I, Schenck is no longer good law. It was mostly overturned by Brandenburg v. Ohio in 1969, a case involving a Ku Klux Klan leader who spoke at a rally. While Schenck criminalized speech about the draft, Brandenburg created a much more permissive standard that more clearly separated commentary about policies from rallying cries to engage in unlawful conduct. Under Brandenburg, speech can be prosecuted if it is (1) “directed at inciting or producing imminent lawless action,” and (2) the speech is “likely to incite or produce such action.”

As Law&Crime has explained in the past, what matters under Brandenburg is the risk of danger. Elura Nanos recently wrote that “[w]hen speech is likely to create immediate lawbreaking or immediate danger, the government may indeed step in and prohibit that speech.”

Though the Supreme Court didn’t discuss Schenck or Brandenburg while so doing, the Court in 1971 overturned the conviction of a California man who wore a jacket which contained the phrase “Fuck the Draft.” Free speech cases have erred on the side of speech, and against the side of regulation, in the post-Brandenburg era that, again, overturned Schenck — the case involving the fire/theater saying.

Amber Heard: “…It’s a freedom to speak truth to power.”

AH: “And that’s all I spoke. I spoke it to power, and I paid the price.” pic.twitter.com/g6VNYMipu7

Bottom line: Heard bungled the quote from Schenck as many people regularly do. It’s important to remember that Heard is not a lawyer, but she is in good company among public figures in making the ill-fated analogy that has seemingly become a household phrase. As Law&Crime has previously explained, Gov. Kathy Hochul (D-N.Y.) and President Joe Biden, both of whom are trained lawyers, have also uttered the phrase despite the status of Schenck as mostly rubbished jurisprudence.

Perhaps the bigger issue at play for those who observed the Depp v. Heard trial is this: Heard cited an incitement case, not a defamation case, to support her assertion that she told the truth in a defamation trial. We’ll refer you to our past discussions about defamation cases (New York Times v. Sullivan, Hustler Magazine v. Falwell) for a primer on defamation law.  The issues cannot be mixed and confused.