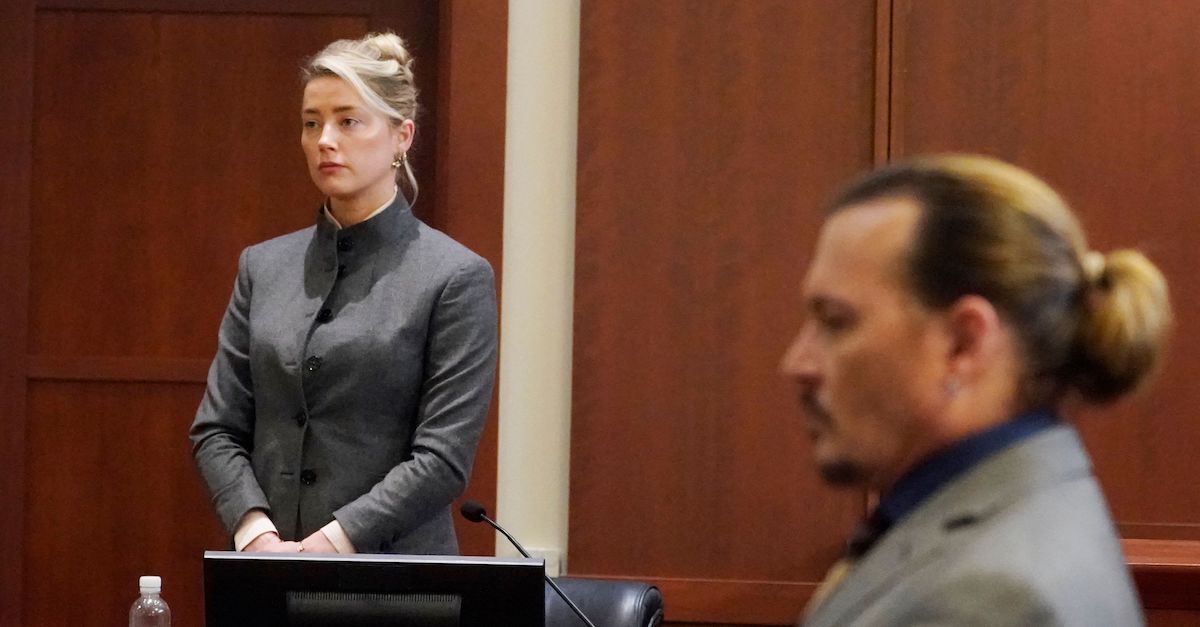 Amber Heard and Johnny Depp watch as the jury leaves the courtroom at the end of the day at the Fairfax County Circuit Courthouse in Fairfax, Va. on May 16, 2022.

When Johnny Depp and Amber Heard’s widely watched defamation trial goes to deliberations, a Virginia jury probably won’t sweat the finer points of the state’s defamation law as much as the fundamental question of whose story they believe, a media law expert told Law&Crime.

“I think that on both sides, it’s going to come down to who’s telling the truth,” attorney Mitchell Epner, a partner at Rottenberg Lipman Rich, P.C., said in a phone interview. “There really isn’t space for them both to be telling the truth.”

To cite the most dramatic example, Depp and Heard’s accounts of what happened in Australia in March 2015 illustrate the stark divide. Both claimed that the other committed an alarming assault with a liquor bottle—and denied the other’s allegations. According to Depp, Heard threw a vodka bottle at him that shattered and sliced off one of his fingertips, when his hand was wrapped over a bar. Heard accused Depp of raping her with a bottle, during what she described as Depp’s three-day bender on eight to 10 pills of MDMA.

“These Two People Know What the Truth Is”

Under the typically weighty actual malice standard established under New York Times v. Sullivan, Epner noted, a litigant might struggle to prove that someone knowingly made a false statement or had a reckless disregard for the truth.

“In the case of Johnny Depp vs. Amber Heard—and the countersuit—that issue does not really arise, because there is no question here that these two people know what the truth is,” noted Epner, who has represented a number of media companies in film and TV.

Depp’s defamation case boils down to a small portion of Heard’s Washington Post op-ed dated Dec. 18, 2018: “I spoke up against sexual violence — and faced our culture’s wrath. That has to change.” The Pirates of the Caribbean star takes issue with the title, two sentences and a paragraph. None of them cites his name.

As Epner notes, however, trial has exposed that omission as a “fig leaf.”

“She has clearly stated that that story was about Johnny Depp and should have been understood to be about Johnny Depp,” Epner noted, referring to Heard’s rebuttal testimony that the actor was the “powerful man” the world rushed to protect.

The legal issues get more byzantine from there. For example, Heard’s attorneys dispute whether her tweeting out a link to the op-ed with the title constitutes “republication,” but the broader issues are less rarefied.

Depp and Heard have both cast themselves as the abused party and the other as the abuser.

On Thursday, Judge Penney Azcarate threw out a proposed self-defense instruction to the jury, and so neither party will have access to that argument.

When a U.K. judge assessed Depp’s lawsuit against The Sun, the ruling scrutinized 14 alleged incidents of domestic violence. In a 129-page order, the judge credited a dozen of those and found that the British tabloid’s editorial fairly described him as a “wife beater.”

A Virginia jury will not have to render such a painstaking breakdown of each alleged incident, but they will need to unanimously determine more broadly who is telling the truth.

On this question, Epner pointed to a famous quotation by trial lawyer Gerry Spence: “Facts are not persuasive; stories are.”

“There are two competing narratives here: The narrative that Johnny Depp has presented is that he was a victim of Amber Heard, both in the physical sense that she physically abused him, but also that she set him up along the lines of what happened in the movie Gone Girl—that she created a false narrative that he beat her with the plan to destroy him publicly,” Epner said.

On the surface, Heard’s counterclaims involve certain statements by Depp’s lawyer Adam Waldman, who called her allegations “fake,” “fraud,” and a “hoax,” inspiring what she described as a social media smear campaign. But Epner said that the finer points of Waldman’s statements will matter less to the jury than her overarching story.

“Her competing narrative is that she was actually physically abused by him,” Epner continued. “That anything that she did in response was, in essence, her trying to fight him off. That she lived in terror for her life. And then, she is being victimized a second time by this trial, where he’s dragging her through the mud by falsely denying that he beat her and threatened her. And which of those two stories is believed will be the key to how the jury comes out.”

Depp tried to distance himself from Waldman’s statements, but a jury would have to find that the lawyer was acting as his agent for the counterclaims to prevail.

If the jury finds liability, they will have to award damages. Depp has asked for $50 million, and Heard wants double that amount at $100 million.

On Depp’s side, he claims Heard’s domestic abuse claims transformed him from “Cinderella” to “Quasimodo,” sidelining his career. Heard alleges that Depp’s smear campaign brought down her rising star right after box office success of Aquaman, which came out days after her editorial.

Both of their expert witnesses crunched numbers estimating what their earning power would have been, absent the alleged defamation. Heard’s legal team argued that Depp shot his own career with chronic lateness and drug and alcohol abuse. Depp’s legal team, for their part, asserts that Heard wildly overstated her trajectory as the next Gal Gadot.

Put the calculators aside, Epner says, because any damages award likely will be guided less by the experts’ computations than by the jury’s indignation.

“I think that it would be very hard for me to imagine a world where the jury concluded that Johnny Depp’s story on liability was correct, and that Amber Heard had in a calculating way—not only physically abused him, but created this elaborate false narrative to try to destroy his career—but conclude that notwithstanding that, he shouldn’t get much by way of damages because he was already a faded star,” Epner said.

Closing arguments will begin on Friday morning, and the jury will likely get the case before the Memorial Day weekend. Epner said he’d be surprised but not shocked if they return a verdict before that time. He would not expect deliberations to last more than a week.