Larry Flynt, Who Legally Got Away with Saying Jerry Falwell Sr. Got Drunk and Had Sex with Mother in an Outhouse, Dies at 78 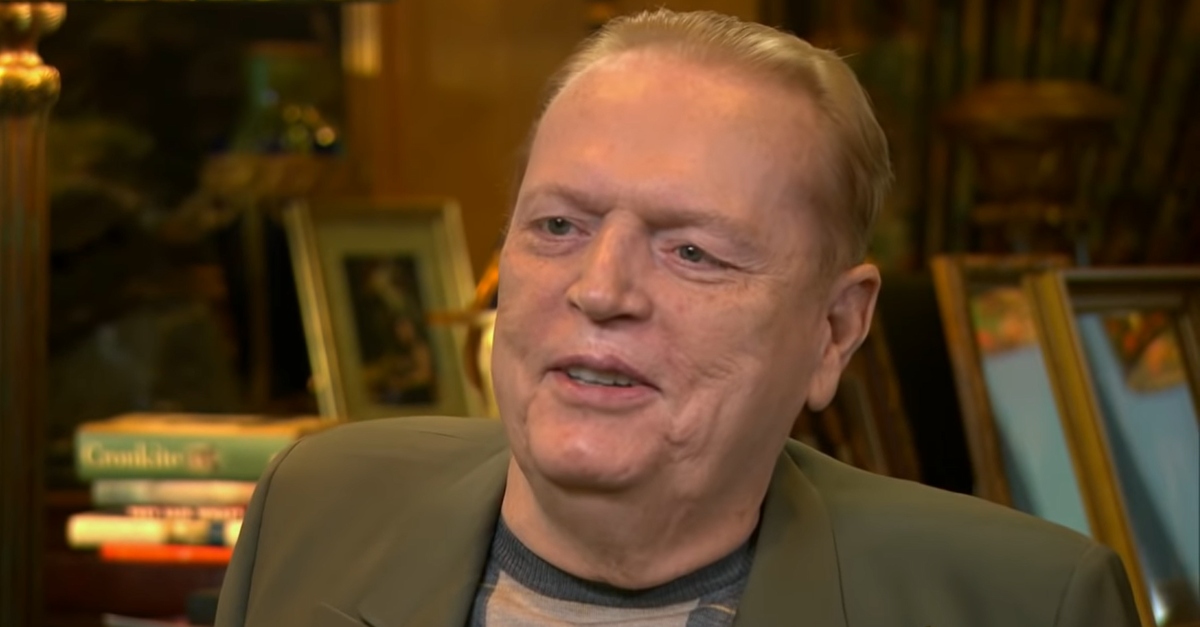 Larry Flynt, the publisher of distinguished adult magazine Hustler, has died at the age of 78.

Flynt’s brother Jimmy Flynt confirmed his passing with The Washington Post, but left the cause of death unclear. Family sources cited by TMZ said it was heart failure. Larry Flynt leaves behind quite a reputation, equal parts ostentatious and combative. It is no surprise he got himself in the kind of trouble that ends up in the Supreme Court of the United States.

A November 1983 issue of Hustler infamously featured a parody advertisement for the liqueur Campari, in which a fictional depiction of the evangelical Rev. Jerry Falwell Sr. said that his first time having sex was with his mother in an outhouse. As summarized by Chief Justice William Rehnquist in the Supreme Court’s 1988 decision in Hustler Magazine v. Falwell, the real Campari ads were tongue-in-cheek depictions of celebrities discussing their first times having the liqueur. The parody ad in question was mean as hell, with the fictional Falwell saying his mother had previously had sex with other guys in town.

Rehnquist was a little more delicate when summarizing the matter at hand. From the opinion:

Copying the form and layout of these Campari ads, Hustler’s editors chose respondent as the featured celebrity and drafted an alleged “interview” with him in which he states that his “first time” was during a drunken incestuous rendezvous with his mother in an outhouse. The Hustler parody portrays respondent and his mother as drunk and immoral, and suggests that respondent is a hypocrite who preaches only when he is drunk. In small print at the bottom of the page, the ad contains the disclaimer, “ad parody — not to be taken seriously.” The magazine’s table of contents also lists the ad as “Fiction; Ad and Personality Parody.”

Flynt argued at the defamation trial that readers would have known the ad was not meant to defame Falwell, his mother, or others in the family. He lost at trial. A Fourth Circuit appeals court affirmed the judgment. Flynt would not let this slide. He took the case to the U.S. Supreme Court and won.

From Rehnquist [emphasis ours]:

This case presents us with a novel question involving First Amendment limitations upon a State’s authority to protect its citizens from the intentional infliction of emotional distress. We must decide whether a public figure may recover damages for emotional harm caused by the publication of an ad parody offensive to him, and doubtless gross and repugnant in the eyes of most. Respondent would have us find that a State’s interest in protecting public figures from emotional distress is sufficient to deny First Amendment protection to speech that is patently offensive and is intended to inflict emotional injury, even when that speech could not reasonably have been interpreted as stating actual facts about the public figure involved. This we decline to do.

The court held that emotional distress alone is not enough for public figures and officials to collect damages for intentional infliction of emotional distress. Basically, the Campari ad was too absurd to be believed, and it did not qualify. From the holding:

In order to protect the free flow of ideas and opinions on matters of public interest and concern, the First and Fourteenth Amendments prohibit public figures and public officials from recovering damages for the tort of intentional infliction of emotional distress by reason of the publication of a caricature such as the ad parody at issue without showing in addition that the publication contains a false statement of fact which was made with “actual malice,” i.e., with knowledge that the statement was false or with reckless disregard as to whether or not it was true. The State’s interest in protecting public figures from emotional distress is not sufficient to deny First Amendment protection to speech that is patently offensive and is intended to inflict emotional injury when that speech could not reasonably have been interpreted as stating actual facts about the public figure involved.

Justices ruled 8-0. Anthony Kennedy, the ninth member of the court, had recently joined when SCOTUS issued the decision.

Flynt and the reverend buried the hatchet after a joint appearance on Larry King Live.

“I’ll never admire him for his views or his opinions,” Flynt wrote in a 2007 Los Angeles Times op-ed after Falwell’s death. “To this day, I’m not sure if his television embrace was meant to mend fences, to show himself to the public as a generous and forgiving preacher or merely to make me uneasy, but the ultimate result was one I never expected and was just as shocking a turn to me as was winning that famous Supreme Court case: We became friends.”