Sorry, Gov. Cuomo: New York City Can Do a Lot to Legally ‘Quarantine’ Itself 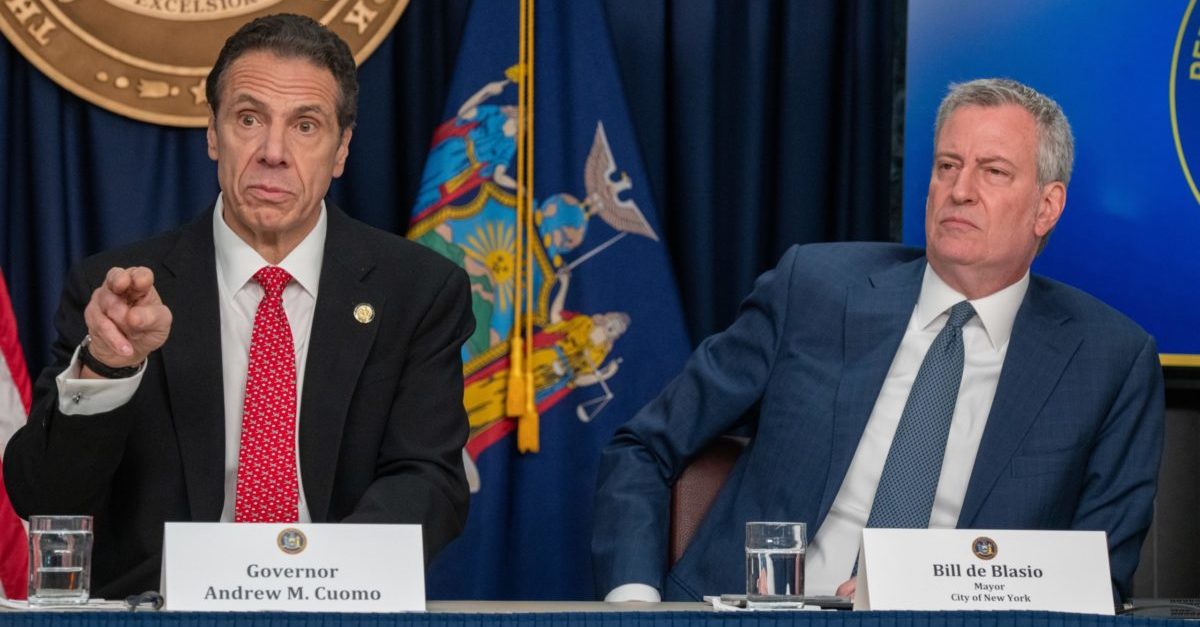 It would be nice in a time of pandemic for our elected officials to (1) know the law, (2) to carry it out, (3) judge factual matters effectively, and (4) not worry about their political futures. Alas, that is too optimistic. Enter the current stalemate of sorts between New York Gov. Andrew Cuomo and New York City Mayor Bill de Blasio.  After the mayor began touting the idea of a so-called “shelter in place” order for New York City, the governor shot back with this, according to CNN:

Cuomo kept up the talk on Thursday: “I would have to authorize those actions,” he said, according to the National Review. “It’s not going to happen.”

Local Control in States of Emergency

According to Section 20 of New York State’s Consolidated Executive Law, “[i]t shall be the policy of the state that … local government and emergency service organizations continue their essential role as the first line of defense in times of disaster, and that the state provide appropriate supportive services to the extent necessary” (emphasis ours).  The law further says the state’s policy is that “local chief executives take an active and personal role in the … implementation of disaster preparedness programs and be vested with authority and responsibility in order to insure the success of such programs” (emphasis ours).  A “disaster” includes an “epidemic” or “disease outbreak.”  A “chief executive” includes a “mayor.”

That does not suggest “state approval,” to use Cuomo’s words.

Also, under Section 24, a “chief executive [a.k.a mayor] may proclaim a local state of emergency within any part or all of the territorial limits” of his city for a period “not to exceed 30 days.” The state of emergency can include, in part:

That sounds like a “quarantine” in the current vernacular sense.

The law also allows local executives to ask the governor for help when situations become too large for adequate local control. And, under the law, the legislature, not the governor, can terminate local state of emergency orders.

A citizen who violates a local emergency order can be charged as a class B misdemeanor in New York.

Section 28 of the law allows the governor to declare a state disaster either on his own volition or to be forced to declare one by the request of multiple local executives.

That brings us to Article 3 of New York City’s health code. There are several tools available to city authorities to effectively do something very, very similar to a quarantine. The city’s health commissioner is authorized to declare public health emergencies to “establish procedures to be followed, issue necessary orders and take such actions as may be necessary for the health or the safety of the City and its residents.”  That language is rather broad.  The health code notes that this power of the health commissioner is separate from a mayor’s proclamation.  The health commissioner is also authorized to seize or destroy “any food, drug device, cosmetic, article or thing that . . . is . . . prejudicial to the public health.” Article 11 of the city’s health code allows the health commissioner to “order the removal and/or detention of such a person or of a group of such persons by issuing a single order.”  Those named in such an order can be “detained in a medical facility or other appropriate facility or premises.”  These detentions are limited in duration.

It’s been suggested that Cuomo and de Blasio “hate each other’s guts.” Fair enough. Perhaps the court of public opinion should judge them based on their ability to cite laws in support of their positions.