‘Shelter in Place’ Might Mean NYC Uses Fire Code, Not Health Code, to Fight the Coronavirus 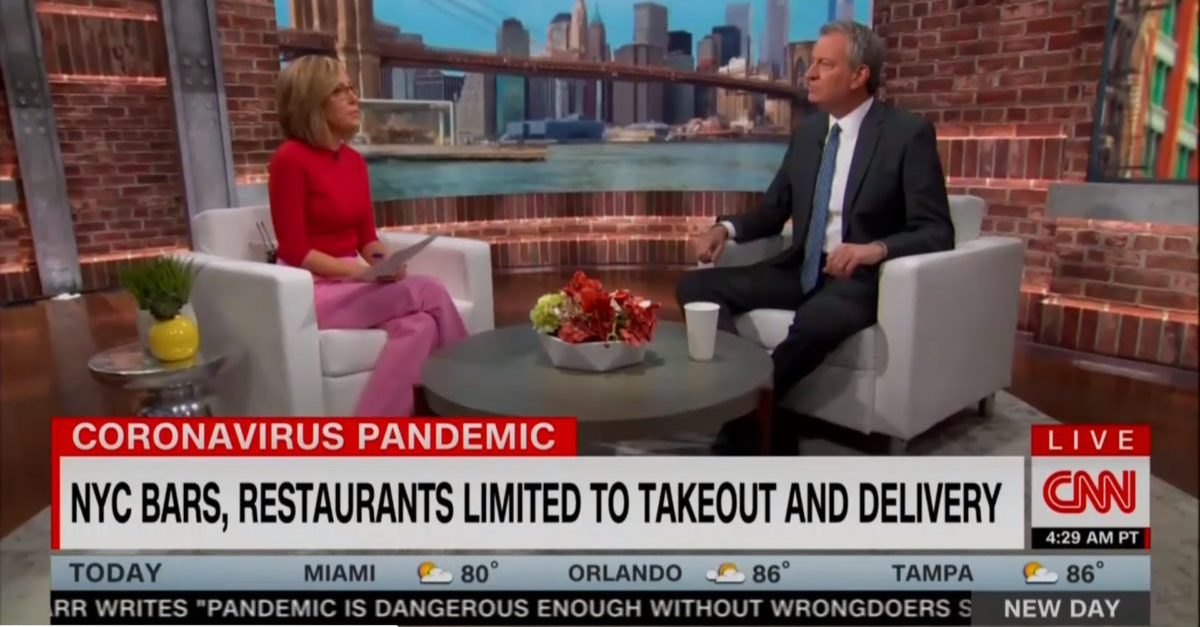 The coronavirus (more specifically COVID-19) is resulting in varying levels of legal chaos about who can do what, and when, to combat the spread of the virus. CNN’s Tuesday morning interview with New York City Mayor Bill de Blasio added another wrinkle to the mix.

Mayor Bill de Blasio says he is “absolutely considering” a shelter in place order for New York City residents just like the one instituted in California’s Bay Area on Monday.https://t.co/Od9ItxTsoq pic.twitter.com/a3tf8dtYw6

The usual chorus of news articles sprang up during the ensuing hours which — to zero surprise here — used the same exact verbiage. NBC News used the “shelter in place” language in a report, which said a decision to shut New York City down could come within 48 hours. The New York Post reported that the speaker of the New York City Council pressed for faster action. The New York Daily News, Fox News, and The Hill also picked up on the same verbatim — “shelter in place” — which originated with CNN’s Camerota.

The issue here is that, as far as we can tell, “shelter in place” is language which appears absolutely nowhere in New York State or New York City law which directly applies to health. It does, however, appear elsewhere. Perhaps the city’s legal counsel should this straighten out.

Let’s walk things back: New York is a large state with complicated laws. The state constitution is supreme; state statutes are both “consolidated” and “unconsolidated”; and state administrative rules can include codes, rules, and regulations. State public health laws are generally listed in the state’s consolidated statutes; the sections on communicable diseases are here and here.  But — bingo! — most of the state laws expressly do not apply to New York City: exemption 1, exemption 2. Even if they did, the phrase “shelter in place” does not appear in New York State statute.

This brings us to New York City Code. Of the city’s health code and rules, articles 3 (general provisions) and 11 (reportable diseases) are most on point. Article 11 contains provisions for “isolation, quarantine, exclusion, treatment or other preventive measures,” all of which are discussed and defined.  The phrase “shelter in place” appears nowhere in the relevant health code.

Indeed, the only place which legally seems to contain the phrase “shelter in place” is in the city’s fire code. Chapter 4 defines “shelter in place” as “[t]he precaution of directing building occupants to remain indoors, at their present location, in response to a fire or non-fire emergency.”

What constitutes a non-fire emergency? The language of the fire code is broad: “A biological, chemical or nuclear incident or release; declaration of emergency by a lawful authority; explosion; medical emergency; natural disaster; or other emergency affecting the premises or the safety of building occupants.”

Yet FDNY rules suggest that “sheltering in place” is primarily intended for something other than a public health matter: “[g]enerally, this means that it is safest for you to remain in your apartment while firefighters put out a fire or emergency responders clear a nearby hazard,” the document says (PDF page 134).  “You will only endanger yourself by leaving a safe area during the emergency” (134). “I have sheets or towels that can be soaked in water and placed under doors to block smoke from entering,” one sheltering in place preparation self-assessment asks (164). These provisions are obviously meant for smoke-and-flame-visible events. “There are four basic responses to an emergency in a building,” the document says, including sheltering in place (176; emphasis added).

Complicating matters is the FDNY’s announcement that it would not dispatch its crews to deal with cases of the coronavirus.

It will be interesting to see where the New York Mayor’s offical legal strategy will lead. Clearly, the mayor has many options at his disposal when it comes to managing the city; he may use several creative tools as this pandemic spreads day by day. What remains open to question is which city department has the authority to do what, whether using the fire code will be a strong enough measure, and what penalties could follow for someone who does not heed an order to “shelter in place” — if this, indeed, is what the mayor intends to order. While a conflict of laws analysis would certainly be interesting, cooperation among deparments will likely be the order of the day, and it is not uncommon — as the health laws of many states contemplate — for first responders like firefighters to be called to handle pandemics like COVID-19.