Could the Capitol Rioters Really Be Charged with Felony Murder for Death of Ashli Babbitt? 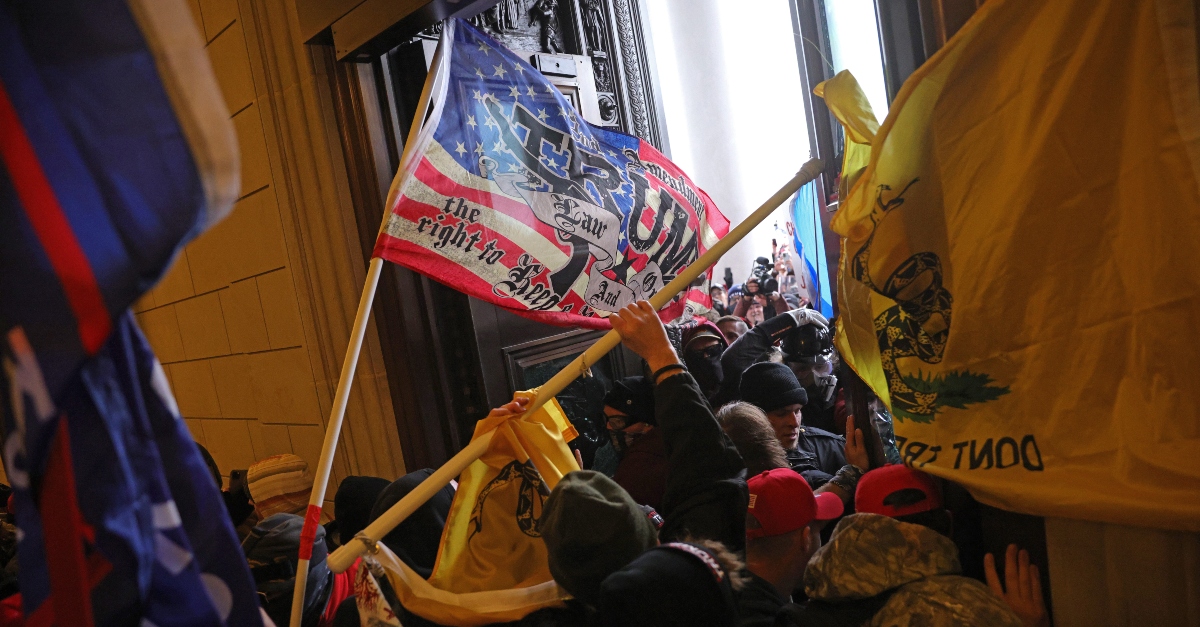 Once it was reported that a woman died during the riots at the Capitol on Wednesday, many on Legal Twitter were quick to call for prosecutors to bring felony murder charges.

Everyone involved should be charged with felony murder.

Yes. I understand that the woman was one of the people who attacked the capitol building. But if a member of a gang of bank robbers dies, the surviving members are responsible for the death caused by their actions. So, as far as I’m concerned, the blood is on @HawleyMO‘s hands.

I can’t even comprehend the number of people who are now subject to felony murder charges https://t.co/0Fbc2g6h0T

Our new AG knows the danger posed by White Supremicist RW crazies having prosecuted Tim McVeigh. Hope he tracks down all those who entered the Capitol today. Given that their felony entry resulted in the death of a woman there should be felony murder charges against them

Late Wednesday, the deceased was identified as Air Force veteran and Trump supporter Ashli Babbitt. Babbitt was a California resident who served 14 years in the military; according to her husband, she was fatally shot by a Capitol Police officer as the riot spilled into the U.S. Capitol. Babbitt’s Twitter account, replete with pro-Trump and conspiracy theory tweets, showed multiple posts in the days and hours leading up to the riot at the Capitol.

In tragic irony, the conversation has now turned to whether Babbitt’s death could be prosecuted as felony murder.

The felony murder rule is a common law legal principle (now usually codified by statute) that allows prosecutors to charge defendants with murder, even when a victim dies accidentally. If a person dies during the commission of a dangerous felony, their death can be deemed “felony-murder” in some circumstances. Essentially, this rule is a way of officially declaring a victim’s blood to be on the hands of a criminal who indirectly caused their death.

There are limitations, of course. While the specifics vary by jurisdiction, the felony murder rule always requires a defendant to have committed a dangerous “underlying felony.” Most jurisdictions list within their penal codes which particular felonies are sufficiently serious to be coupled with the felony murder rule. Further, the victim’s death must be foreseeable. It can be unplanned or accidental, but it must be a risk related to the underlying felony committed by the defendant.

The classic law school example of the felony murder rule is that of an armed bank robbery. If a group of assailants agrees to draw guns and rob a bank, but does not plan to shoot anyone, felony murder is still an appropriate charge against all of them if one of them if someone dies in the process — even against the getaway driver who didn’t have a gun and didn’t pull the trigger.

Broadly speaking, suggestions of using the felony murder rule to hold rioters at the Capitol accountable for Babbitt’s death have some legal merit. Certainly, there were lawbreakers afoot, and a person’s death is a foreseeable result of mob violence in patrolled and secured government buildings where armed guards are present.

A criminal prosecution would require all elements to be proven beyond a reasonable doubt, however. The specifics here are as of right now far less certain.

For starters, the federal murder statute (which is the law that would apply to crimes committed in the District of Columbia) lays out the following list of crimes that could constitute an underlying offense for felony murder:

“[a killing ] or committed in the perpetration of, or attempt to perpetrate, any arson, escape, murder, kidnapping, treason, espionage, sabotage, aggravated sexual abuse or sexual abuse, child abuse, burglary, or robbery; or perpetrated as part of a pattern or practice of assault or torture against a child or children.”

You’ll notice that “rioting” or “inciting riots” isn’t on this list. Without more, it is unlikely that individuals including Donald Trump, who may have encouraged riots, could be guilty of an underlying crime appropriate for use of the felony murder rule. Some may suggest that “treason” was committed (or at least attempted), but under the statute, that’s not quite right, either. Nor is sabotage, which applies more narrowly to military supplies and installations and not to the houses of political power.

Law&Crime spoke with criminal defense lawyer and President of the Connecticut Criminal Defense Lawyers Association Frank Riccio, who said, “I believe that even a very liberal interpretation of the treason statute may not wholly fit what occurred at the U.S. Capitol today.” Therefore, Riccio continued, “the felony murder rule, also known as murder in the first degree via 18 USC §1111, likely doesn’t apply.”

“Sedition,” as my Law&Crime colleague Jerry Lambe discussed earlier, is a better match — but that’s not on the felony murder list. Nor are rebellion or insurrection or other federal statutes which criminalize various types of “violent entry and disorderly conduct” on federal grounds. Remember: federal felony murder charges can only be brought if the underlying felony is contained in the the narrow list of underlying offenses above.

Perhaps the best fit, at least for those who actually took place in the riots themselves, would be the oft-misunderstood “burglary.” Unlike the colloquial use of “burglary” to indicate a nighttime break-in and theft of personal property, the actual crime is far broader. Under the D.C. burglary statutes, anyone entering a building with the intent to commit a crime inside that building has committed burglary. Importantly, no crime inside need actually occur, so long as the perpetrator entered the building with criminal intent.

For at least some of the D.C. rioters, proving their intent to commit a crime after breaching the Capitol building would be an easy thing to prove; some crimes were obviously committed inside, and others were clearly attempted.

Law&Crime spoke with University of North Carolina Law Professor Carissa Byrne Hessick who opined, “there is a very strong argument to be made that the rioters who entered the Capitol committed the intentional crime of burglary.” While Professor Hessick acknowledged that, “It is certainly possible that not everyone who entered the Capitol on Wednesday intended to commit another crime,” she pointed out that, ” it is clear that many rioters did intend to commit crimes such as theft and vandalism.”  Further, she continued, “It’s also important to remember that there are a slew of obscure federal laws—such as obstruction of Congress by threat or intimidation—that could potentially be applied to most (if not all) people who marched to the Capitol.”

Even if we could find a particular defendant who did commit one of the necessary underlying crimes, a victim’s death must have occurred “in the perpetration” of that crime. This is a matter of timing and proximity. We’d need to know that the defendant in question was still in the process of committing their crime when the death (or at least the injury leading to the death) occurred.

At this point, some of the facts are still purely speculative, while others are coming to light. We don’t know the full story of how Babbitt came to be shot, although it has been reported that she was fatally shot in the chest by Capitol Police. Video circulating on YouTube which purported to show her death suggested that she was at the front of a throng of people screaming and yelling against a set of doors leading from a stairwell into a secured hallway. If the video is accurate, Babbitt was shot trying to climb into the barricaded hallway with a backpack through an apparently broken window opening next to the doors. If her death was too remote from the felony being committed, a prosecutor would not be permitted to use the felony murder rule to hold the felon responsible.

The identity of the shooter is also a crucial piece of missing information. At this point, one semi-official statement about the circumstances of the shooting is from a phone interview by Rep. Markwayne Mullin (R-Okla.) with NBC’s Savannah Guthrie:

“There’s a young lady that died because she stormed through the door and an officer had to make the split decision and had to shoot her, and guess what, their families lives have changed.  His life has got changed because the first time you discharge your weapon, it changes you, it changes you — and it changes you forever.”

The video circulating online suggests Babbitt was slowly climbing through the window, but her actions still could arguably have placed those on the secured side of the door in imminent fear that they were in danger.

It is unclear from the available video whether Babbitt was armed.

Mullin’s account and other reports indicated, and the video suggested, that the shooter was a police officer. If so, the felony murder rule will certainly not work.

“The Felony Murder Rule applies only when a specified violent crime (e.g., robbery) occurs and the principal or an accomplice commits a murder. Today, a police officer—presumably in self-defense—shot the victim. The Rule does not apply,” Law&Crime Network legal analyst and former federal prosecutor Gene Rossi explains.

The death of Rosanne Boyland could also potentially be prosecuted as a felony-murder. Boyland was reportedly trampled to death during the riots, which raises similar issues regarding predicate felony and foreseeability. Should a fellow rioter be guilty of burglary or another appropriate felony, Boyland’s accidental death could be deemed felony-murder if it is found to have been a sufficiently foreseeable risk.

Then there is the death of Capitol Police Officer Brian Sicknick, who was killed when a rioter reportedly bludgeoned him with a fire extinguisher. Of course, the individual who wielded the fire extinguisher could certainly be prosecuted for murder without need of the felony murder rule. Other rioters could be prosecuted for felony-murder, or even for conspiracy. At this point, further analysis of charges for Officer Sicknick’s death are speculative at best, given that reports are still developing as to the relevant facts.

Editor’s Note: This piece was updated to include additional legal analysis and comment from Prof. Hessick.