‘I Love Them, Too’: Pro-Trump Congressman Has a ‘Hard Time Believing’ Capitol Rioters ‘Are Actual, True Trump Supporters’ 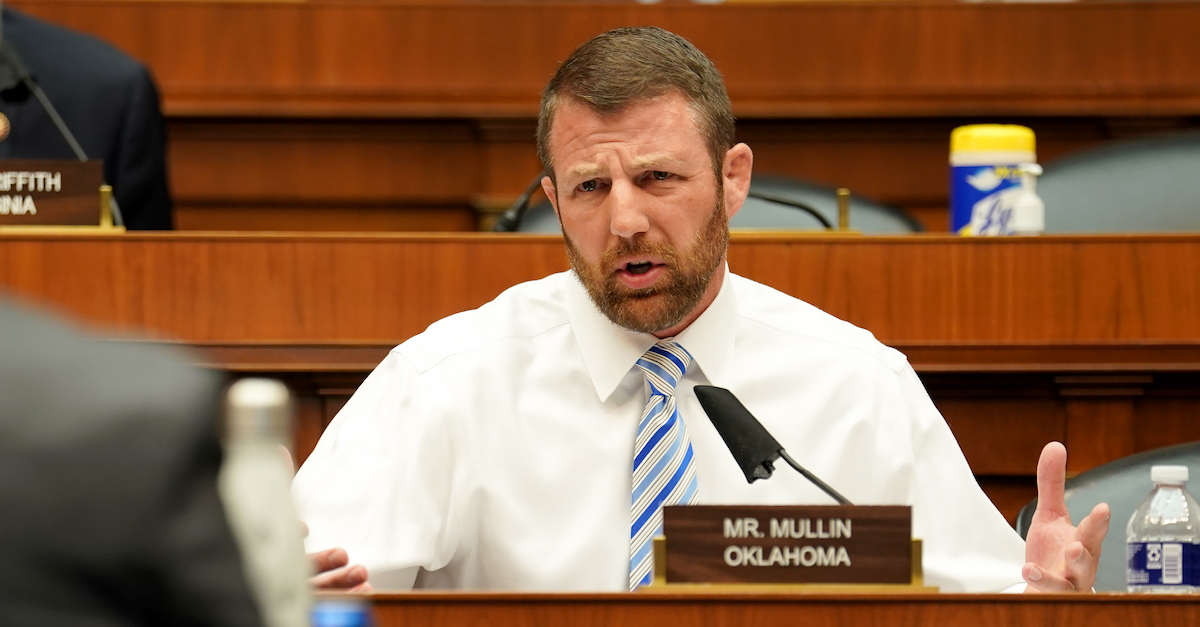 While locked in his office Wednesday evening amid violent and deadly protests in and outside the U.S. Capitol, Rep. Markwayne Mullin (R-Okla.) told NBC’s Savannah Guthrie by telephone that “both sides” were to blame for the political rhetoric which resulted in rioters storming the building and shutting down a joint session of Congress convened to count Joe Biden’s certified victory in the Electoral College. He also said he had “a hard time believing” that “actual, true Trump supporters” were causing the illegal mayhem because the considered the conduct atypical of their character.

Mullin said no shots were fired in the House chamber but that “guns were drawn” when glass was broken. He said law enforcement officers showed “phenomenal restraint” when they were “strongly outnumbered.” He said that he “stood right there with them, and we made sure the chamber was completely cleared.”

He called the perpetrators “completely out of line.”

Guthrie noted that Mullin, a supporter of President Donald Trump, was planning to object to the count to certify Biden’s win. She then asked whether Mullin felt Trump’s reaction to the deadly violence at the Capitol was “enough” or whether Trump was still “fanning the flames by contending” that 2020 was “a stolen election” — resulting in people breaking the law and storming Congress.

“The president told them to go home, and even he said, ‘I love them,'” Mullin continued. “People are trying to criticize him for saying he loved them, but I wake up every single morning and I say ‘love the people, love the call.’ And I love these guys too, that isn’t . . . that doesn’t mean I condone what they did.”

Mullin said he talked to between 25 to 50 law enforcement officers — maybe more — in a “triage center” after things cooled down slightly.

Mullin said he asked the officers what happened. The response he received was that there were two distinct groups on the capitol grounds Wednesday when the violence erupted.

“Every one of them [the officers] told me the same thing,” Mullin recalled. The people who stormed the building “separated from the protesters.”

“These guys had evil in their eyes when they came after us,” Mullin said while recounting what the officers told him. “The rest of the protesters continued on their way.  These guys broke away. They were there as agitators.”

Mullin said that when the vandals started breaking glass, he met them at the door, told them not to shoot, and told them that “they almost got shot.” He said he asked people why they were “willing to do this;” most “calmed down a little bit.”  However, he said he could not reason with “one guy” — the primary agitator — who “kept running his mouth.”

“I’ve seen this overseas,” he continued, but not in America. “This went too far.”

On the merits, Mullin said the “belief isn’t there” that the 2020 election was fair and that there are “real questions” about the constitutionality of the process; however, he said there was “no excuse” for what happened in and around the Capitol. He said discussions were occurring about how to study the 2020 election but that “the manner by which we present the findings may change.”

He then said he knew some of the protesters who arrived in town from Oklahoma to be part of a so-called “Stop the Steal” rally that President Trump encouraged on Twitter and ultimately addressed in person shortly before the Capitol building was stormed.

“They’re all headed home. They weren’t part of this. This was a separate group. These were agitators that came there to make as much destruction as possible,” Mullin said.

Guthrie suggested that the First Amendment allowed healthy protests but that “when you fan the flames, sometimes you can unleash an element that isn’t responsible — there are rioters and agitators” of violence.

“The rhetoric’s been irresponsible on both sides; we’ve seen it from both sides,” Mullin said after Guthrie’s comments. “There’s been some really, some really — big flames . . . that was fanned even before President Trump got into office — before he was even sworn into office.”

Mullin said anger has been “bubbling” for some time but disavowed any suggestion that Trump was to blame for the Senate and the House losing control of their own chambers to protesters and rioters.

“It hasn’t been from our side, and that’s why I said I have a hard time believing these are actual, true Trump supporters because you haven’t seen this from Trump supporters,” Mullin said. “Trump supporters have been out there too. They’ve been on the streets.  They’ve been to rallies; they’ve had conflict with ANTIFA and the other groups; and this has never went to this point.  This is the first time we’ve ever seen it go to this point.  And as I’ve said before, It doesn’t make any difference who’s fanning the flames, at the end of the day, we are all responsible for our own actions.  And the way you choose to act, is, you should be held responsible for, and I hope everybody that came in there is held responsible because — you — a lot of people’s lives have changed.  There’s a lot of law enforcement, a lot of Capitol Police, and D.C. Police, and Sergeant of Arms, that came to work today that’s going to go home a little bit different.  There’s a young lady that died because she stormed through the door and an officer had to make the split decision and had to shoot her, and guess what, their families lives have changed.  His life has got changed because the first time you discharge your weapon, it changes you, it changes you — and it changes you forever.”

Mullin said the victim’s family “lost a loved one” and would “grieve tonight” because of “what got out of hand” in a “dark day for all of us.”

“We can debate in a better manner,” he said as Guthrie wrapped up.

The interview was broadcast starting at about 4:10 p.m. Eastern time on the streaming media channel NBC News Now.