#KUSINews has confirmed the identity of the woman shot and killed inside US Capitol.

Media reports are identifying the woman reportedly killed by police at the Capitol Building on Wednesday. She is 35-year-old Ashli Babbitt, a 14-year veteran of the U.S. Air Force, according to KUSI. The San Diego news outlet paraphrased her husband as saying “says she was a strong supporter of President Trump, and was a great patriot to all who knew her.”

Fox 5 DC also identified Babbitt as the woman who died.

BREAKING: Family confirms woman shot & killed at Capitol is Ashli Babbit. She owned a business in San Diego w/ her huband who did not come to DC. “I really dont know why she decided to do this,” her mother-in-law tells me. Police have not confirmed circumstances of shooting pic.twitter.com/OOYpNWpMLg

Chief Robert J. Contee III of D.C.’s Metropolitan Police Department did not identify the woman in a press conference Wednesday evening, or precise circumstances behind her death, and only said that she had been shot. Law enforcement sources cited by The Washington Post said Capitol police shot and killed her.

Her death comes as supporters of President Donald Trump–including Babbitt–stormed the Capitol Building as POTUS continued to make unfounded and baseless claims that the 2020 presidential election was stolen from him. The hours-long unrest put Congress’ attempt to certify the electoral college results for President-elect Joe Biden on hold.

Incredible Getty photos from inside the Capitol pic.twitter.com/IN2rRcsOg5

“I really don’t know why she decided to do this,” her mother-in-law told Fox 5 DC. Babbitt owned a business in San Diego, California with her husband, she said. The husband did not go to Washington D.C., said Fox 5 DC reporter Lindsay Watts.

A Twitter account attributed to Babbit–@Ashli_Babbitt–certainly showed an ardent support for the president. It also showed that she was a prolific consumer of far-right content. The final post on the Twitter account was a Wednesday morning retweet of attorney Lin Wood. Wood’s tweet called for Vice President Mike Pence to resign and be charged with “treason” (a crime punishable by death, and a crime Pence has not committed). The Wood tweet also called for the arrest of former Deputy Attorney General Rod Rosenstein and the resignation of Chief Justice John Roberts.

Wood is one of the right-wing lawyers who, along with Sidney Powell, brought the so-called “Kraken” lawsuits that alleged a conspiracy to steal the election from Trump. Those claims have resulted in warnings from lawyers for Dominion Voting Systems of “imminent” litigation. Those “Kraken” lawsuits have been completely rejected by the courts in multiple states, and attorneys for at least one of the defendants have asked a federal judge to refer Powell and Wood for disbarment. A judge in Delaware has also raised questions about Wood’s post-election lawsuits. 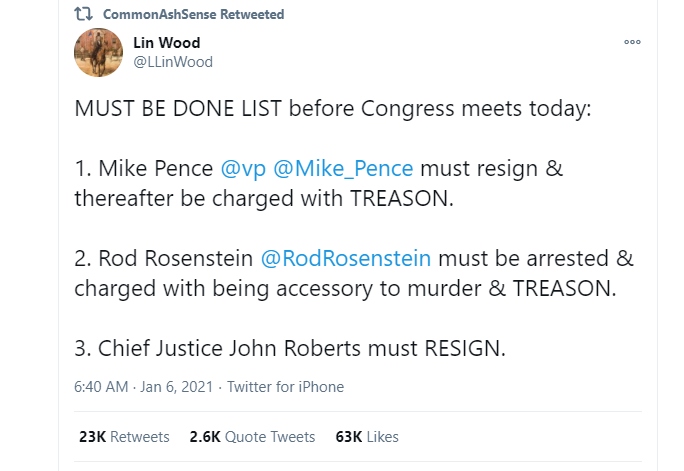 Another retweet from two days ago amplified Juanita Broaddrick’s tweet saying the “Stop the Steal” rally on Jan. 6 would be “1776 all over again…. only bigger and better.”