Arkansas Man Identifies Himself as Trump Supporter Who Sat in Pelosi’s Office, Claims He Left Her a Quarter 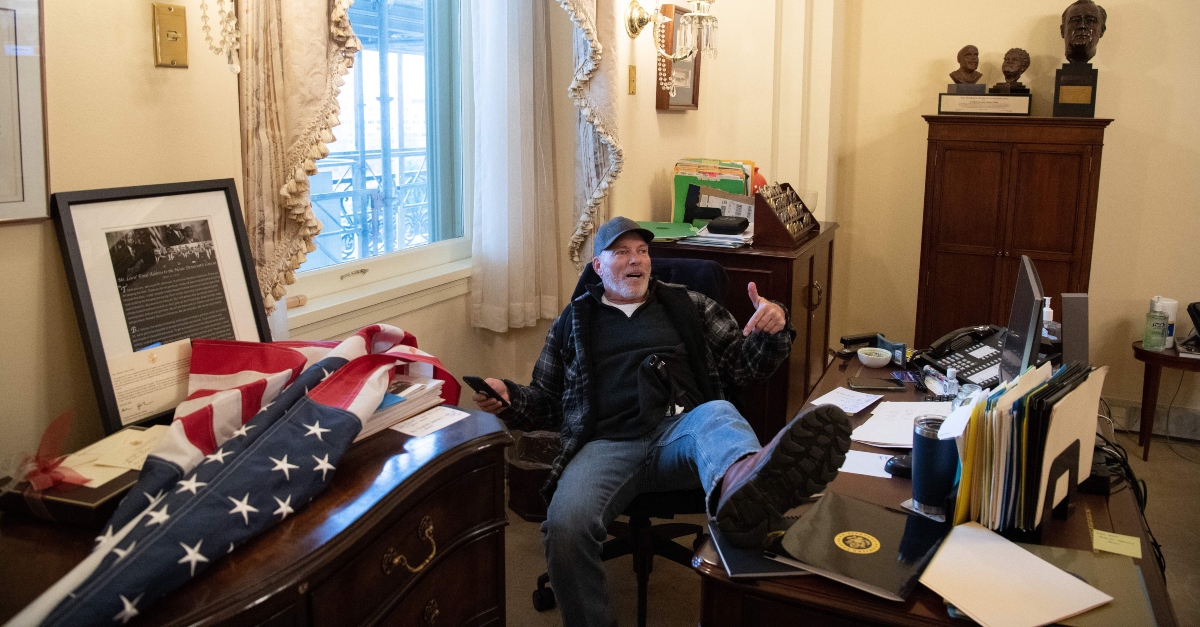 A hell of a lot happened on Wednesday in Washington D.C., where supporters of President Donald Trump stormed the Capitol Building as Congress attempted to count the Electoral College votes and certify Joe Biden’s victory. One moment in particular stood out: a man was seen putting a foot on a desk in the office of House Speaker and common Trump target Nancy Pelosi. He has been identified as Arkansas man Richard “Bigo” Barnett, 60.

He insisted to New York Times reporter Matthew Rosenberg that he did not actually steal the envelope that he took from Pelosi’s office because he left the Speaker a quarter.

That’s Richard “Bigo” Barnett, 60, from Gravette, Ak., showing off the personalized envelope he took from Speaker Pelosi’s office. He insisted he didn’t steal it — “I left a quarter on her desk.” pic.twitter.com/aST7MCoRwP

The commonly shared picture on social media shows him with his foot on a desk. People often interpreted this as being the speaker’s, but Pelosi’s daughter Christine Pelosi said it was not.

Not her desk. The Trump rioter did vandalize her office. The trash will be removed and the seditionists will be prosecuted. https://t.co/uablvzMXNt

Other pictures and video of today’s events showed Trump supporters storming the Capitol, spurred by his insistent, baseless claims he won the 2020 presidential election. Trump supporter Ashli Babbitt was shot and killed in the building, reportedly by police.

Reporters with KNWA and Fox 24 said they recognized Barnett, and confirmed his identity with members of the Benton County Republicans in Arkansas.

Barnett, a resident of Gravette, Arkansas repeated his quarter story to 5 News Online. He said he was sitting at the desk, and found himself to be bleeding on the envelope.

“I picked up the envelope, and put it in my pocket, and I put a quarter on the desk,” he said. “Because I’m not a thief.”