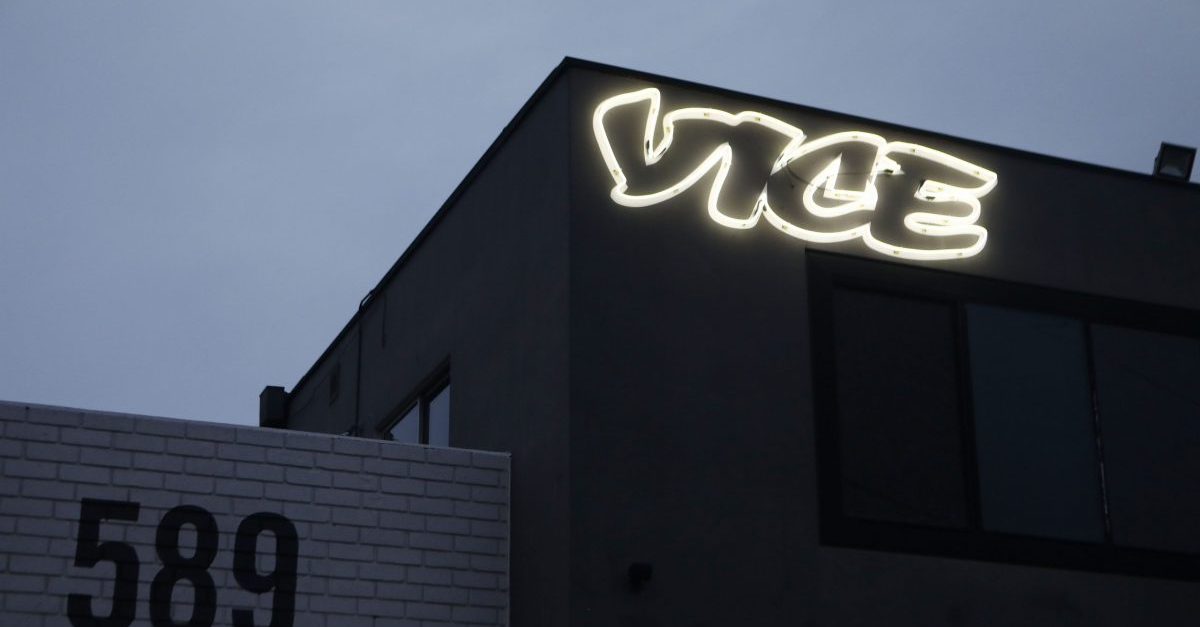 A Monday lawsuit filed in federal court by attorney Charles Harder on behalf of a company named BYD has accused VICE Media of “two grossly defamatory statements” which “have caused substantial harm.” The lawsuit also argued a VICE report “did not even accurately describe” the “single, unreliable source” VICE relied upon in “wholesale” fashion to produce an “inflammatory and explosive accusation.”

BYD, which stands for “Build Your Dreams,” the lawsuit says, “is a publicly-traded corporation based in China.” Berkshire Hathaway is said to be a “major investor.”

The company produces electric vehicles, solar panels, batteries, and — you guessed it — protective masks. “BYD recently won a contract to supply the State of California with $1 billion worth of masks to protect its nurses, doctors, caregivers, first responders and other frontline personnel during and after the COVID-19,” the lawsuit notes. That’s part of the reason VICE appears to have subjected the entity to scrutiny.

The original VICE report contained this headline: “Trump Blacklisted This Chinese Company. Now It’s Making Coronavirus Masks for U.S. Hospitals.” Per the VICE report, BYD received “emergency approval” from the Food and Drug Administration to “let quality products in while keeping out fraudulent ones” during the COVID-19 pandemic. However, according to the VICE report, BYD has also “been prohibited by law from bidding for some federal contracts in the United States.” Per VICE:

Although the company, BYD, is a major global player in the electric vehicle and lithium battery markets, it also has glaring red flags on its record, experts warn, including a history of supplying allegedly faulty products to the U.S., ties to the Chinese military and Communist Party, and possible links to forced labor.

The VICE report went on to recite a laundry list of “investigations,” products which were “plagued by mechanical problems” or were “not safe,” “red flags,” “administrative penalties,” “labor disputes,” “contract disputes,” “patent disputes,” and courrt cases against BYD. As to its journalistic processes, VICE conspicuously noted the following:  “Requests for comment sent to two U.S.-based BYD spokespeople and a U.S.-based lawyer who represents BYD Precision Manufacture were not returned. Messages left with a Hong Kong-based PR firm and a company representative in Europe were also unreturned.”

Now, the company which refused to answer questions is suing.

The section of the VICE report which led to the instant litigation reads, in part, that BYD faced “troubling allegations of connections to Uighur forced labor in Xinjiang province.” It went on to say that that “BYD was one of 83 companies identified in [an Australian activist group’s] report as using forced Uighur labor in its supply chain, alongside major international brands such as Apple, Nike, and General Motors.”

In its lawsuit, BYD says it “enjoyed a very good reputation” prior to a VICE article which linked it to “human rights violations” and “forced Uighur labor” involving “the Uyghur minoity in Eastern China.” (The name of the Muslim minority group in China is invariably spelled Uyghur and Uighur.)

“VICE Media falsely claimed that BYD was ‘using forced Uighur labor in its supply chain,’ the lawsuit alleges, and did so with “reckless disregard for the truth.” The latter phrase is legally operative language for defamation claims generally involving public figures. Additionally, the company’s lawsuit says VICE failed to “accurately describe” the Australian report upon which the claims for forced labor connections were based.

The lawsuit also argues that the use of the word “blacklisted” in VICE’s headline is defamatory. “VICE Media claimed that BYD’s name had been included onto some sort of list maintained by President Trump of companies that would not be permitted to sell electric buses to the United States, because of their prior bad behavior,” the company’s lawsuit says. “This allegation by VICE Media is completely false.”

Here is the company’s explanation, per court documents:

In fact, there was and is no such “blacklist”—and VICE Media was fully aware of this fact at the time it published the Article. What actually occurred is that members of the United States Congress (not President Trump) determined that an entirely separate Chinese company:  China Railway Rolling Stock Corporation, a state-owned entity, was using its public subsidies to undercut other producers of transit vehicles and unfairly compete in the market. Accordingly, both houses of the U.S. Congress passed, and President Trump signed, language in an omnibus defense authorization bill that prohibited future federal funds from being used to purchase transit vehicles from Chinese companies. This ban was not connected to any allegation of wrongdoing on the part of BYD, did not create any sort of blacklist, and was the product of Congressional legislation, not any action on the part of President Trump to single out bad actors.

BYD says it has been harmed by the publication because its “business deals already have been delayed, obstructed and/or terminated based directly on the false allegations in the Article.”

BYD alleges only one cause of action, defamation, and says its damages exceed $75,000. That’s the amount necessary to get a case into federal court.  BYD also demands punitive damages, injunctive relief against VICE “enjoining” the publication of defamatory statements, and other relief.

Law&Crime emailed VICE for its reaction to the lawsuit. No response has been received as of the time of this writing.

Harder, the attorney for BYD, has also represented both Donald Trump and Sean Hannity.

Read the full lawsuit in the embed below: