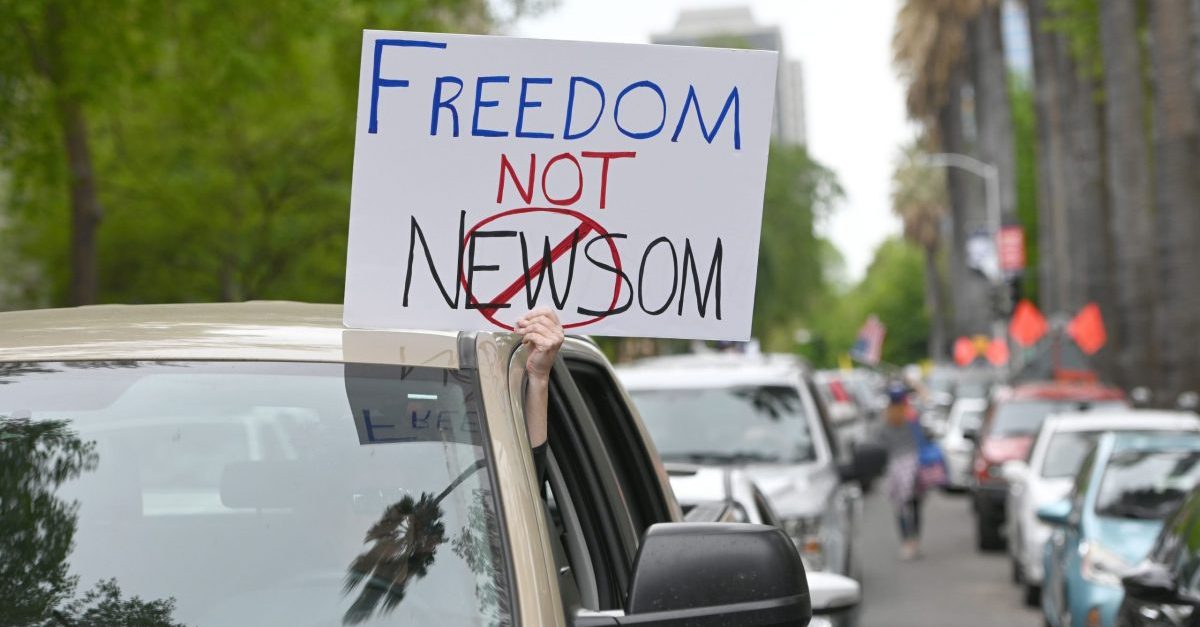 A protester holds a sign through a car window in Sacramento, Calif.

Protect Democracy, an advocacy group, on Tuesday delivered a letter to California Gov. Gavin Newsom, a Democrat, which argues that a California Highway Patrol “ban on protests” is unconstitutional despite its purported goal of stopping the spread of the novel coronavirus. Rather than bluntly criticize, however, the group suggested how California authorities might tailor the state’s “legitimate interest in protecting public health” with the rights of citizens to exercise their First Amendment freedoms in areas such as the grounds of the state capitol.

Among those who signed the letter are several concomitant organizations and fifteen prominent attorneys, including Floyd Abrams, Lyrissa Lidsky, and Laurence Tribe. (Floyd Abrams is the father of Law&Crime founder Dan Abrams.)

According to the letter and cited news reports, the CHP “announced that it would indefinitely ban all protests at state facilities and deny permit requests . . . ‘until public health officials have determined it is safe to gather again.'” The move came after “hundreds” of people on April 20th protested Gov. Newsom’s stay-at-home order “from their cars” and “on the steps of the capitol building.”

We do not doubt that CHP’s ban on protests is well-intentioned and meant to protect Californians’ health. And states are certainly empowered to protect the health and safety of their residents.

But constitutional rights are not suspended in times of crisis or when it is expedient. Even the grave public health risks posed by the coronavirus pandemic do not justify CHP’s wholesale and indefinite ban on individuals’ exercise of their First Amendment right to peaceably protest at the state capitol and other state facilities. We urge CHP to either eliminate or revise its current ban so that it comports with the Constitution.

The law is clear: “traditional public forums” for speech cannot easily be closed indefinitely to protesters. While the group admits that the government’s power to regulate activities during a pandemic is greater than it ordinarily might be, a complete ban is simply illegal. Constitutionally, restrictions on the rights of free speech and assembly must be “narrowly tailored,” the group notes, and the “CHP’s ban is not.” 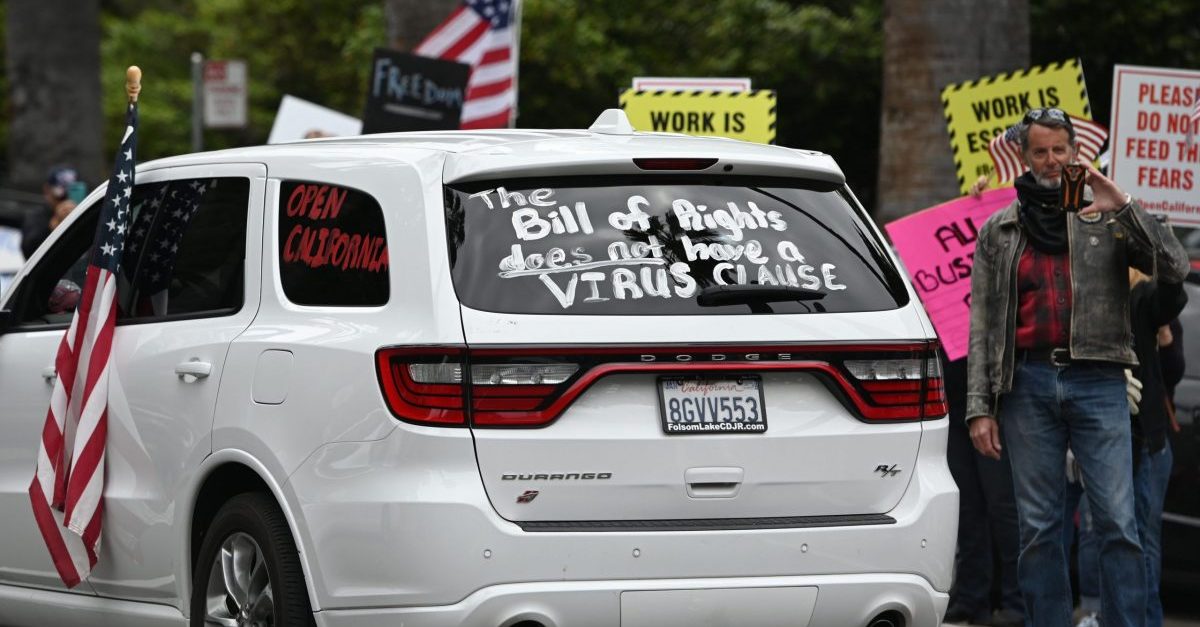 A car carries a message about the Bill of Rights in Sacramento, Calif. — (Photo by JOSH EDELSON/AFP via Getty Images)

The group recommends that California officials allow protests by people in cars. It also suggests allowing protests by people who stand six feet apart and who avoid buffer zones where people must exit and enter state buildings.  Fining people who disobey social distancing guidelines would be permissible, the group opines.

“No doubt, these alternatives would be more difficult to administer than a flat ban on protests,” the letter says.  “But the First Amendment does not allow the government to sacrifice speech for efficiency where ‘a substantial portion of the burden on speech does not serve to advance its goals,'” the letter adds, quoting the U.S. Supreme Court. 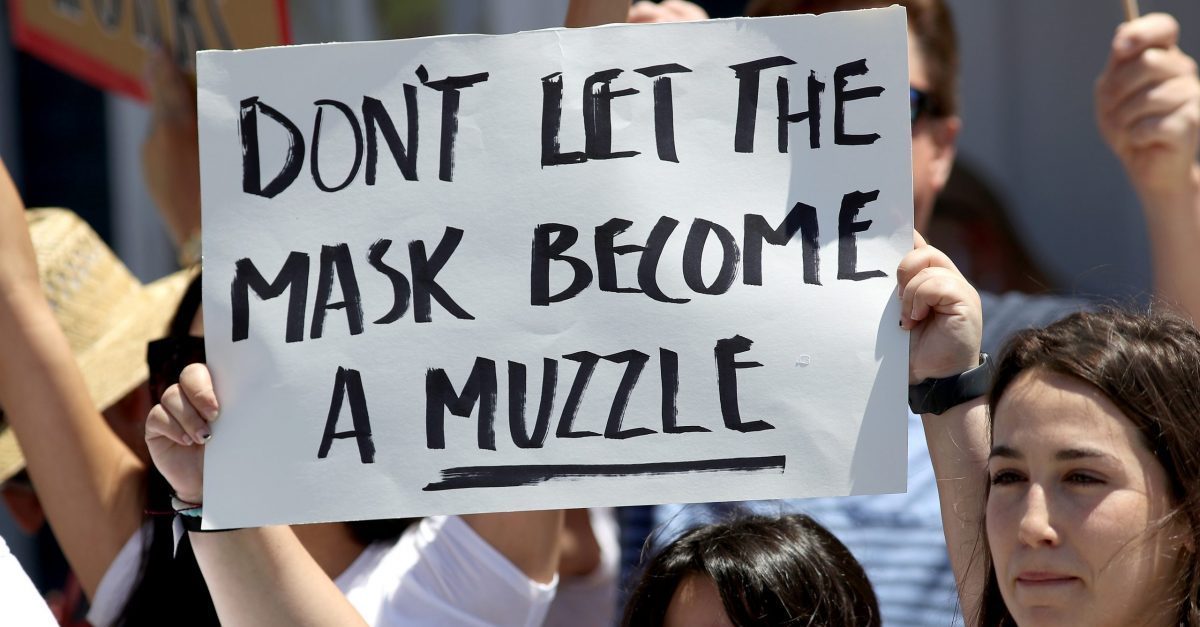 To conclude, the letter summarizes its recommendations as follows: California officials should (1) issue a written policy; (2) tailor the ban; (3) expressly permit in-car protests; and (4) indicate when the ban will be listed (or at least state criteria which would trigger its rescission).

Read the letter in the embed below:

Protect Democracy Letter to… by Law&Crime on Scribd

[Image at the top by JOSH EDELSON/AFP via Getty Images]