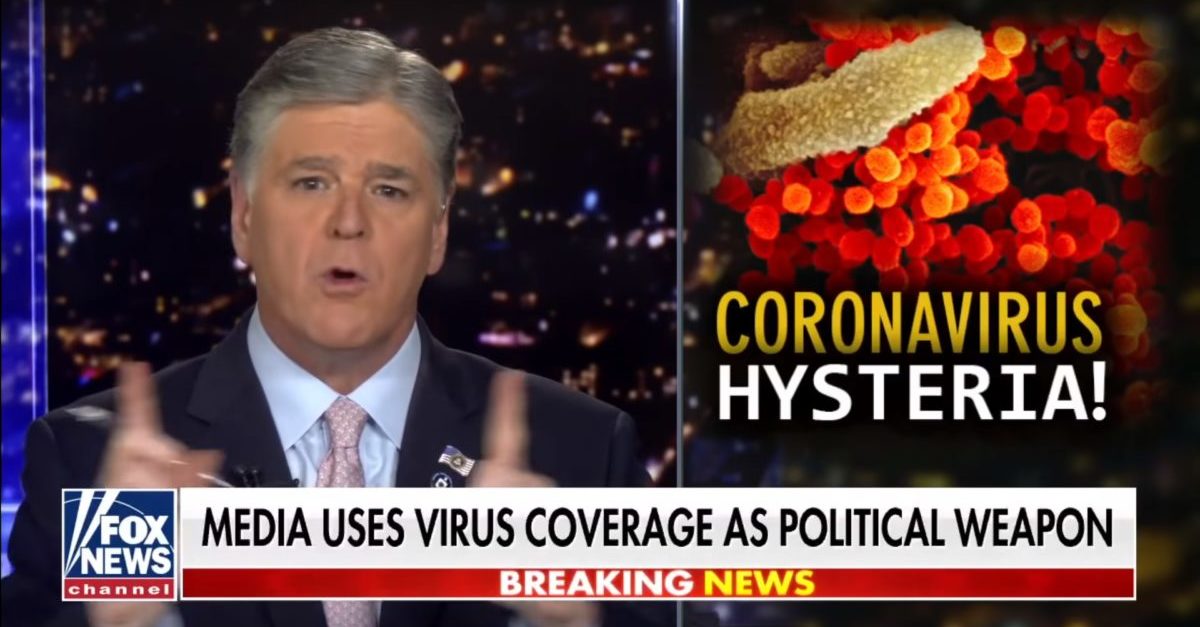 Fox News host Sean Hannity’s official Twitter account tweeted, then deleted, on Monday a story from his personal website that indicated he was suing the New York Times over a series of pieces which Hannity says added up to a smear campaign against him. The New York Times report which is perhaps the most offensive, Hannity says, erroneously blamed the death of a popular Brooklyn bar owner on his coverage of the novel coronavirus. The Times report has been updated since publication, but it has not been retracted as of Monday evening.

What was taken down, though, are claims likely authored by Hannity’s staff which purported that Hannity actually filed a lawsuit. A document sent by Hannity’s attorney to the New York Times stated that a lawsuit is very clearly imminent, but the document is merely a threat. Who is that attorney? Charles J. Harder, the well-known attorney for President Donald Trump who “killed Gawker.”

The story on Hannity’s personal website changed several times Monday. “HANNITY SAYS ENOUGH: Sean Sues the New York Times…” read the original headline and URL, in part. (It has since been altered to direct readers to a new statement demanding a retraction and an apology from the Times.) The thumbnail of the story as originally tweeted from Hannity’s verified account indicated that he had sued the Times, but that tweet was deleted and replaced with this one:

A blockquote which referenced a “lawsuit” has since been changed to reference a demand letter. “Sean Hannity has finally sued the New York Times for their irresponsible and shameful reporting,” the lead sentence of the original article stated.

The original page did not contain a link to documents. However, a link was eventually added which invited readers to click to “[r]ead the court documents.” The phrase “court documents” was added even after much or all of the other language suggesting a lawsuit had been filed was scrubbed from the post.

The “court documents” link did not appear to refer readers to documents which had been filed in court. Rather, it provided a harshly-worded twelve-page demand letter from Hannity attorney Charles Harder to New York Times general counsel Diane Brayton and others at the newspaper. Such letters are frequent precursors to lawsuits but are generally not filed in court. The letter posted online did not contain a court clerk’s file stamp.

In another bizarre use of language, the first sentence of the original article on Hannity.com said the opinion host’s lawsuit “has been long overdo.” In a criticism perhaps worthy of the Princess Bride, that word does not mean what Hannity or his staff probably think it means — or, does it? To “overdo,” according to Oxford, means “carry to excess; exaggerate.” According to Merriam-Webster, it means “to do in excess” or “to use in excess.” To take the “overdo” statement on its face, Hannity’s team is literally saying that a lawsuit is an exaggeration, an excess, or just plain too much. (Perhaps they meant that a lawsuit is overdue?)

A screenshot of Hannity.com which shows an updated headline, but with the original lead sentence, is below. 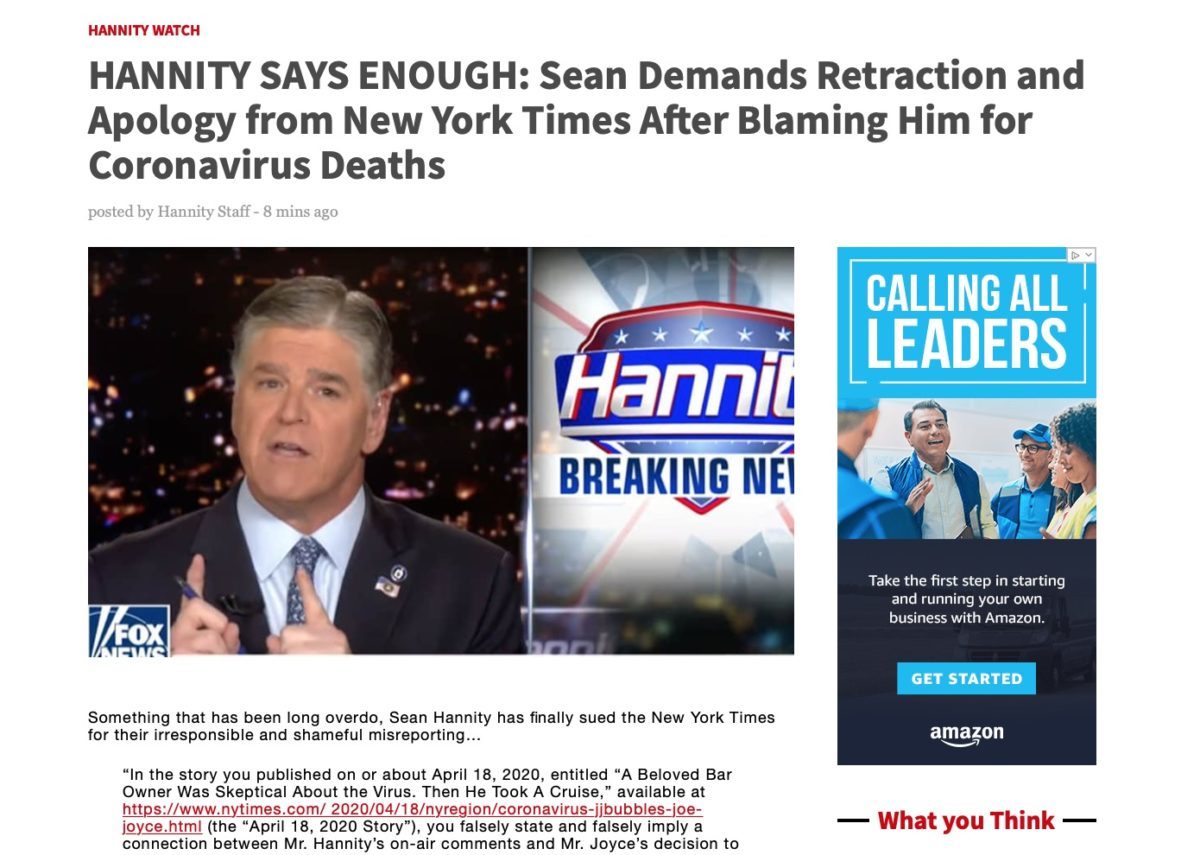 Image via screen capture from Hannity.com

New York State court records viewed by Law&Crime late Monday afternoon do not indicate that a lawsuit has been filed. Even so, the case may be headed to court sooner rather than later.

The crux of Hannity’s complaint is that the newspaper botched a critical timeline in its coverage:

“In the story you published on or about April 18, 2020, entitled “A Beloved Bar Owner Was Skeptical About the Virus. Then He Took A Cruise,” available at https://www.nytimes.com/ 2020/04/18/nyregion/coronavirus-jjbubbles-joe-joyce.html (the “April 18, 2020 Story”), you falsely state and falsely imply a connection between Mr. Hannity’s on-air comments and Mr. Joyce’s decision to take a cruise. But what you fail to mention is that Mr. Hannity’s comments could not possibly have influenced Mr. Joyce’s decision because he embarked on his cruise on March 1 (according to your report), while Mr. Hannity made comments on March 9, which you claim influenced his decision. Moreover, you were fully aware that this was the actual timeline, and in order to mislead your readers and support your false narrative, you withheld the date of Mr. Hannity’s comments from your story.”

“A statement that carries a false implication is defamatory where ‘the language of the communication as a whole can be reasonably read both to impart a defamatory inference and to affirmatively suggest that the author intended or endorsed that inference,'” the letter says, quoting case law.

The letter said that the Times “acted with actual malice in publishing” statements about Hannity. “Actual malice” is the legal standard set forth by the Supreme Court in New York Times v. Sullivan. It tests not whether a reporter hates her subject but rather the reporter’s stance toward the truth. A reporter acts with actual malice if she publishes a statement “with knowledge that it was false or with reckless disregard of whether it was false or not,” the Supreme Court ruled in 1964.

Hannity’s letter states that his team “informed” the newspaper that its timeline was off “prior to publication” through “a near[ly] hour-long telephone call.” During the call, Hannity is said to have “specifically explained” to the Times that its “characterization of his coverage of the coronavirus pandemic was false and incorrect.”

“However, you ignored these true facts and published . . . anyway, with these false statements intact, for the sole purpose of advancing your false narrative about Mr. Hannity and falsely blaming him for Mr. Joyce’s death,” the letter says.

Here is what Hannity wants, per his attorney’s letter:

Your attempt to single out and attack Mr. Hannity for his coronavirus coverage, when he was more responsible in his coverage that all of the foregoing individuals and media outlets, and your intentional disregard for the foregoing irresponsible Democratic Party politicians and Democratic Party-friendly media outlets, including ABC, NBC, CBS, and MSNBC establishes clear bias on your part in connection with Mr. Hannity and the Stories.

Please confirm in writing within twenty-four (24) hours of transmission of this letter that you will retract, correct and apologize for each of the foregoing statements. Failure to do so will leave Mr. Hannity with no alternative but to consider instituting immediate legal proceedings against you. Should that occur, Mr. Hannity would pursue all available causes of action and seek all available legal remedies to the maximum extent permitted by law, including without limitation, actual damages, special damages, punitive damages, and temporary and permanent injunctive relief.

Hannity has been critical of the New York Times article for more than a week.

During a monologue last Monday, Hannity said the Times had “slander[ed]” him by “pretty much all but accus[ing]” him “of murder.” Hannity also accused the Times of taking his original commentary “willingly, maliciously, purposefully” out of context.

Here is the relevant language in the original New York Times report. Joe Joyce is the bar owner who reportedly succumbed to the coronavirus; Kristen is his adult daughter, per the Times. Kristen talked to Times columnist Ginia Bellafante about her father and the virus. Per Bellafante’s article:

“He watched Fox, and believed it was under control,’’ Kristen told me.

Early in March Sean Hannity went on air proclaiming that he didn’t like the way that the American people were getting scared “unnecessarily.’’ He saw it all, he said, “as like, let’s bludgeon Trump with this new hoax.”

Eventually, Fox changed course and took the virus more seriously, but the Joyces were long gone by then. On March 14, they returned to New York from Barcelona, and the next day, before bars and restaurants were forced to close in the city, Joe Joyce went to work at JJ Bubbles for the last time.

That last paragraph of the New York Times article changed sometime after its initial publication. Here’s the second version:

Eventually, Fox changed course and took the virus more seriously, but the Joyces were long gone by then. A spokeswoman for Fox News said that Mr. Hannity made statements taking the spread of coronavirus seriously early on, and that his comment about the public being scared by the coverage happened after the Joyces had left on their cruise.

Ironically, the New York Times reporter who wrote the piece has herself been caught downplaying the coronavirus.

Hannity Demand for New York… by Law&Crime on Scribd