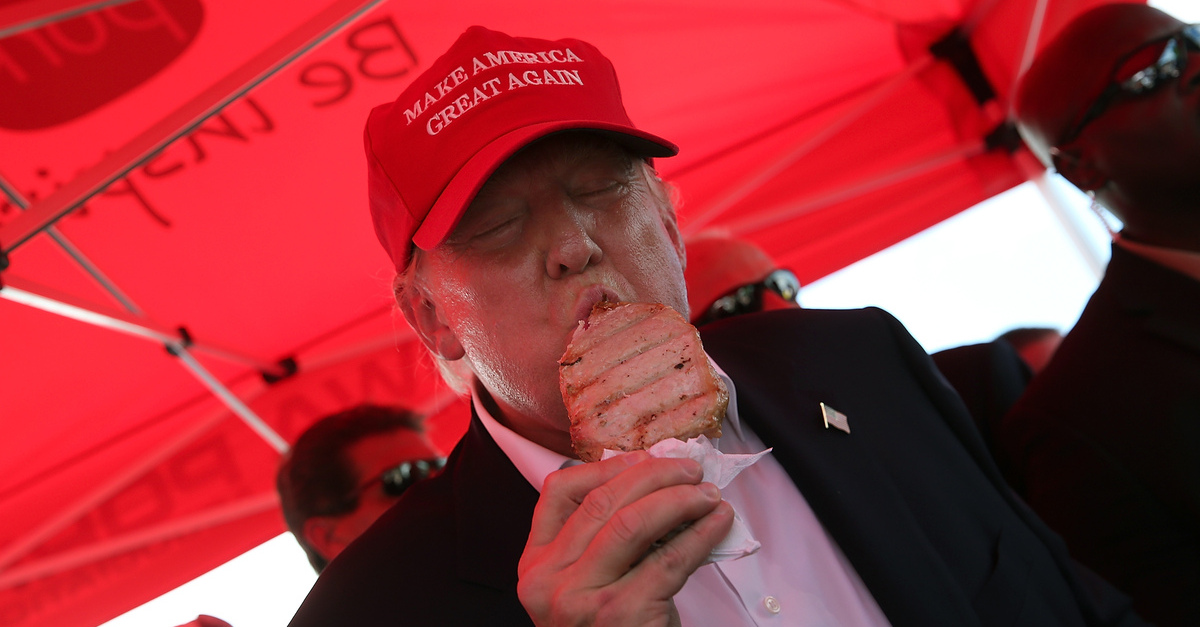 President Donald Trump has finally invoked one of the more heavy-handed aspects of the Defense Production Act (DPA) in response to the turmoil caused by the novel coronavirus pandemic. In an anticipated executive order, slaughterhouses will be deemed “critical infrastructure” and reportedly forced to remain open.

Some 20 meatpacking plants have shut down in recent weeks after thousands of workers were exposed to the deadly contagion. As of this writing, at least 17 abattoir workers have died from COVID-19-related illnesses. The president’s move was made in response to fears of a potential food supply shortage stoked by industry leaders.

“We’re going to sign an executive order today, I believe,” Trump told reporters on Tuesday. “And that will solve any liability problems where they have certain liability problems. And we’ll be in very good shape. We’re working with Tyson, which is one of the big companies in the world. And we always work with the farmers. There’s plenty of supply, as you know. There’s plenty of supply. It’s distribution. And we will probably have that today solved. It was a very unique circumstance, because of liability.”

Conflicting reports about the substance of the guidance contained in Trump’s forthcoming order prompted a scramble among legal experts to account for exactly what was occurring and the extent of the possible directive.

“Very curious to hear what DPA experts think,” mused George Washington Law Professor Randall Eliason. “It seems to contemplate ordering an already-operating industry to direct resources or efforts in a certain direction. That’s very different from ordering a plant to open that has shut down to protect the health of its workers.”

According to ABC News, a senior administration official said that “from a [Defense Production Act] standpoint, it mandates that critical food supply operations stay open” and that “from a liability standpoint, we will issue guidance coming from [the Department of Labor] that will provide additional liability protections.”

Combined, those two provisions — one carrot; one stick — would likely sustain the notion that meat plants will be forced to remain open.

It’s unclear and unlikely that Trump’s executive order would mandate that employees return to work. The practical import of the order’s liability protections, however, could mean that workers might more or less be forced back into arguably unsafe health conditions amidst the still-sprawling global pandemic.

Still, the explanations being given by administration officials raised a bevy of legal questions.

Civil rights attorney Sasha Samberg-Champion wondered whether those liability protections might just be something more akin to consulting language:

It looks like the “liability shield” Trump’s executive order will purport to give meat packing plants from employee litigation may be just some agency guidance on best practices. https://t.co/IUGkXiPkIU pic.twitter.com/P1z2mqWYPF

“Certainly the federal government can commit not to sue employers that meet this guidance,” Samberg-Champion continued. “That’s not exactly binding protection against private litigation.”

Notably, it’s not immediately clear that the DPA even has a section which could confer the sort of absolute liability shield the administration is telegraphing.

University of Texas Law Professor Steve Vladeck theorized that §707 of the law could potentially provide the sort of sweeping authority the president is looking for.

But I’ve *never* understood the DPA to give the President the power to force a private business to remain open—versus providing all kinds of incentives and protection to encourage them to do so.

That’s why the devil will be in the details of this forthcoming Executive Order.

But not so fast. According to case law on §707, the DPA’s liability shield has expressly been determined not to have “full literal effect.”

It remains to be seen whether Trump’s statements signify an administration attempt to rubbish the previous case law and to attempt an implementation of the “full literal effect” of the statutory language.

As Law&Crime previously reported, the grants of authority available to a president who activates the DPA are necessarily broad. Perhaps the most harsh section at Trump’s disposal under the law is the ability to requisition private entities in order to protect national security. Initial reports do not suggest, however, that Trump has plans to temporarily nationalize meat production.

Trump invoked the DPA on March 18 and has been consistently lobbied by critics and allies alike to use — and not to use — the full force of the law to direct industry to rise to the occasion of the pandemic.

“Freedom is when you can force workers to labor under unsafe conditions in a pandemic, tyranny is when the state forces companies to adhere to minimum safety conditions for their own employees,” said The Atlantic‘s Adam Serwer in a series of sarcastic tweets. “He’s afraid of what his own voters will think if they can’t find meat at the grocery store and he doesnt [sic] care if people—particularly low wage workers—have to die to make sure that doesn’t happen.”

“People should never be expected to put their lives at risk by going to work,” Stuart Appelbaum, President of the Retail, Wholesale and Department Store Union told Bloomberg News. “If they can’t be assured of their safety, they have every right to make their concerns heard by their employers.”

UPDATE:  Late Tuesday night, the White House released a list of bullet points outlining Trump’s plan.  No firm executive order had been released by 10:15 p.m.  “To ensure worker safety, these processors will continue to follow the latest guidelines from the Centers for Disease Control and Prevention (CDC) and the Occupational Safety and Health Administration (OSHA),” the bullet points read.  The document also blamed states:  “actions in some States have led to the complete closure of large processing facilities.”  The list of points said nothing about liability.

[Editor’s note:  this piece has been updated to reflect White House bullet points released late Tuesday.  An earlier version of this report stated simply that no official document from the White House was forthcoming at the time of publication.]