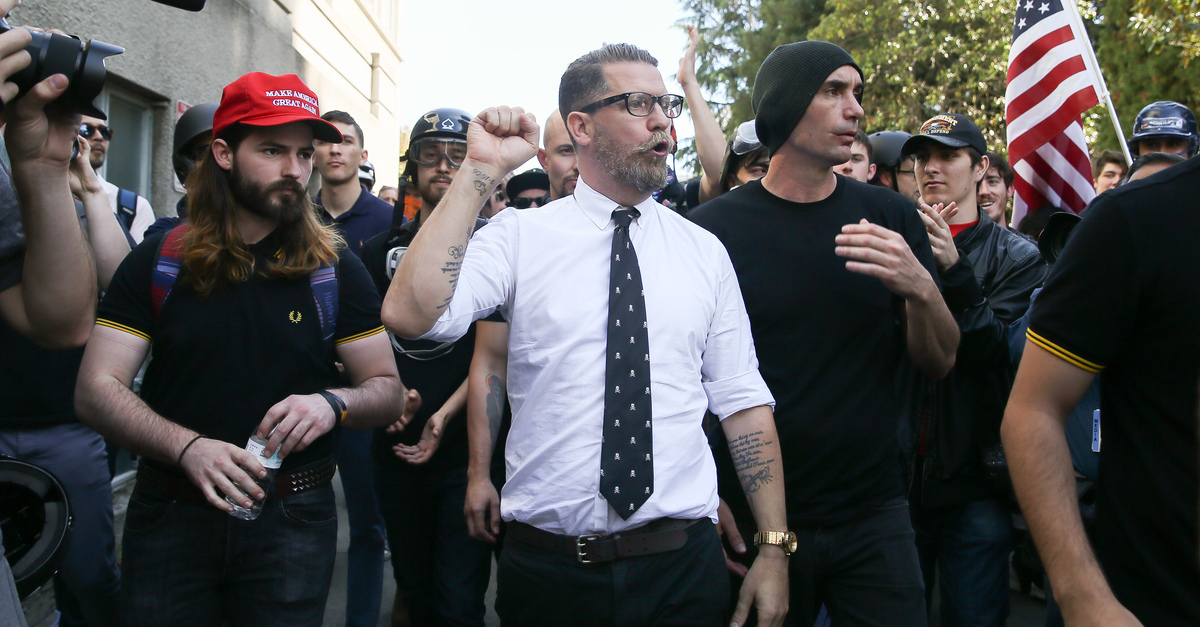 Proud Boys founder Gavin McInnes filed a lawsuit in federal court on Monday against the Southern Poverty Law Center (SPLC) alleging that the civil rights advocacy organization had improperly labeled his work “hate speech” which has resulted in various forms of economic harm. The lawsuit also contests the Proud Boys’ designation as a “hate group.”

McInnes is a Canadian national who currently lives in the posh environs of Larchmont, a wealthy suburb of New York City. In the 61-page lawsuit obtained by Law&Crime, the Vice Media co-founder says that the SPLC has been “defaming him by use of the SPLC Hate Designations, and publishing other false, damaging and defamatory statements about him.”

SPLC’s defamatory, false, and misleading designation of Mr. McInnes as a “hate” figure is purposefully deceitful and intended to tarnish Mr. McInnes’s reputation, disparage Mr.McInnes’s good name and work, inflict harm and financial damage, reduce Mr. McInnes’s goodwill and standing in the community, expose Mr. McInnes, his family and anyone else associated with him to public scorn, harassment, intimidation, and potential violence, and to denigrate, malign, and ridicule Mr. McInnes to countless individuals and potential employers and partners around the world.

In an August 2017 article titled “Hard Times Comin’ Through: Gavin McInnes and the Charlottesville ‘Racism War’“, the SPLC described McInnes and the Proud Boys as some of the leading purveyors of racist violence in the United States. That SPLC piece began with a McInnes quote in which the controversial talk show host said, “overall I cannot recommend violence enough. It is a really effective way to solve problems.”

McInnes has done much to perpetuate both the motivating animus and the viral capacity of political violence since President Trump’s election, including publishing videos on Rebel Media such as Fighting “Anti-Fascists’ is Fun!” Violence is even built into the structure of the Proud Boys hierarchy; the highest level of membership in McInnes’ organization, called a “Fourth Degree,” can only be achieved once a member has engaged in violence with antifascists.

McInnes’s lawsuit disputes the idea that he supports any form of discrimination.

“Mr. McInness, an immigrant, is avowed and vocal opponent of discrimination based on race, religion or sexual preference, and of ideologies and movements espousing extremism, nationalism and white supremacy,” the lawsuit says on page two.

The filing also takes issue with various claims–by the SPLC and media such as the New York Times–that the Proud Boys founder himself preaches violence.

“Far from threatening violence, as suggested by SPLC’s Change the Terms website, Mr. McInnes was [once] victimized by threats of violence and attempts at intimidation because of his non-violent, pro-free-speech activism,” the suit alleges on page 28.

Additionally, the lawsuit goes out of its way to fend off the “hate group” designation of the Proud Boys, instead describing the “Western chauvinist” organization as “a social group for young men of all races and ethnic backgrounds looking for companionship, the opportunity to develop character and ways to reinforce each other’s self-respect as young men.”

Several members of the group are currently facing multiple charges over attacks against passersby on Manhattan’s Upper East Side. On October 12, 2018, dozens of Proud Boys were filmed beating and punching at least three individuals. In late October of last year, Maxwell Hare, a 26-year-old member of the Proud Boys was arraigned on felony gang assault charges over allegations that he “threw the first punch” at a group of anti-fascist and anti-racist protesters.

To paraphrase FDR, judge us by the enemies we’ve made. Gavin McInnes has a history of making inflammatory statements about Muslims, women, and the transgender community. The fact that he’s upset with SPLC tells us that we’re doing our job exposing hate and extremism. His case is meritless.

McInnes is suing the storied civil rights group for tortious interference with economic advantage, defamation, false light invasion of privacy and “aiding and abetting” employment discrimination under New York labor law. The lawsuit notes that McInnes and the Proud Boys lost access to PayPal, YouTube, Twitter and Facebook and lays the blame at the SPLC’s feet.

Filed in Alabama Middle District Court, McInnes’ lawsuit alleges damages in excess of $75,000–including interest, court costs and attorney’s fees. The lawsuit also seeks several forms of injunctive relief against the SPLC which would require the organization to retract their prior statements and publications about McInnes’ ties to hate groups as well as issue a public apology.

“Please join me in the fight of my life,” a statement from McInnes reads. “I want to help you take this country back.”

Read the original petition below:

McInnes v SPLC by on Scribd