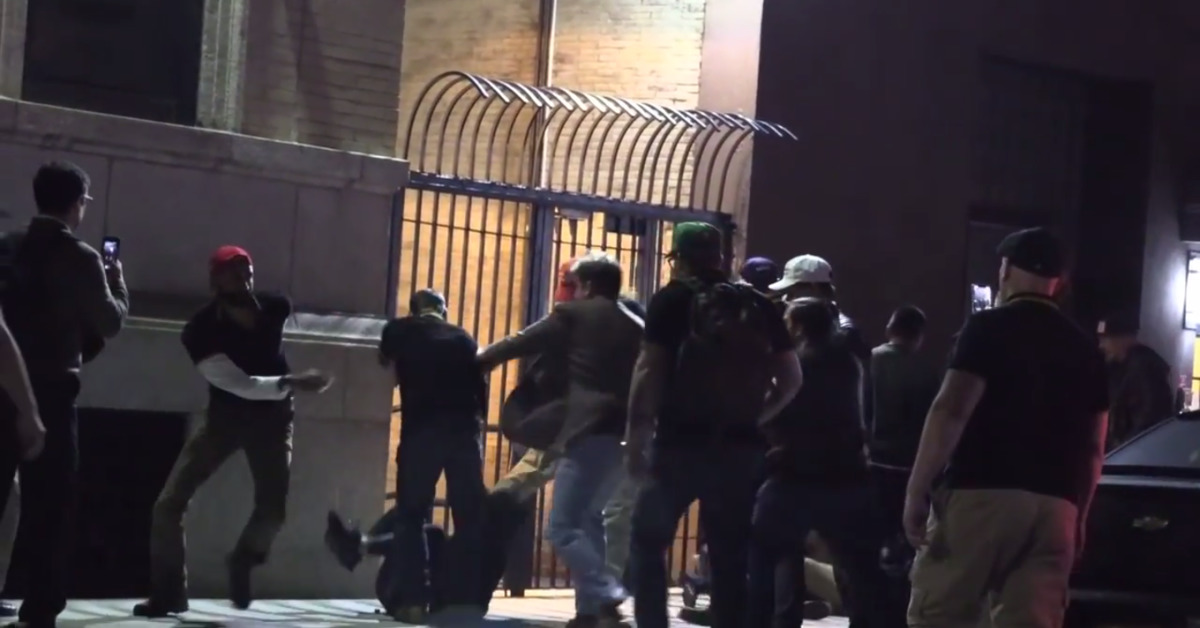 NEW YORK CITY — On Friday night, dozens of members of the far-right gang known as the “Proud Boys” attacked multiple people on the streets of Manhattan’s Upper East Side. Many witnesses say that while these attacks occurred, the New York City Police Department (NYPD) simply refused to intervene.

The Proud Boys — a group of self-described “male chauvinists” led by [Gavin] McInnes, one of the founders of Vice — were holding an event at the [Metropolitan Republican Club] that according to McInnes, featured a recreation of the assassination of a Japanese socialist.

After the McInnes event at Manhattan’s upper-crust Republican Party mainstay, the Proud Boys went to work attacking various passersby who they believed to be anti-fascist protesters. Photographer Shay Horse, who documented much of the night’s violence, says that at least some of the people attacked by the Proud Boys were not protesters, but rather random individuals. In a Twitter post, Horse noted:

So followed the proud boys as they left the event. About 1-2 blocks away [about] 30 (proud boys) [versus] 3 (randoms) fight broke out. It ended with 30 proud boys pummeling a guy on the ground screaming “ARE YOU BRAVE NOW FAGGOT?!”

In a video obtained by Gothamist’s Jake Offenhartz, a member of the neo-fascist group can be heard bragging about his exploits while others laugh and chant, “I had one of their heads and I was just fucking smashing it into the pavement! I ripped that motherfucker’s mask off and fucking kicked him right in the head! That son of a bitch! He’s a fucking foreigner!”

Other members walked down the street chanting, “I like beer!” in an apparent reference to the controversial testimony of Supreme Court Justice Brett Kavanaugh.

Proud Boys members can easily be identified by their official uniform–black Fred Perry polo shirts with yellow accoutrements. In various posts and videos spread across social media, the Proud Boys can be seen kicking and stomping their victims–and shouting slurs–as they lay helpless on the pavement.

Aside from the violence, multiple observers were struck by the police response. Or, rather, the lack thereof. According to various witnesses, the far-right gang was able to act with complete impunity.

Queens District Attorney candidate and New York City Councilman Rory Lancman issued a statement calling out the NYPD for their apparent inaction during the beatings. He said:

It is revolting to see white supremacists commit a hate crime on the streets of New York City — in full view of the NYPD — and for none of them to be arrested. We have seen this in other cities, but it is shocking to see it here. Hateful and violent behavior has no place in New York City, and those responsible must be arrested and prosecuted to the fullest extent of the law.

Tonight in NYC the #ProudBoys called people they considered to be “antifa” faggots as they beat them up. Gavin McInnes brandished a sword. The police provided them with protection. Then @FoxNews created this bullshit story. pic.twitter.com/AJoU91uLEH

BuzzFeed News’ Julia Reinstein also took stock of the NYPD’s apparent non-response. She wrote, “Despite New York Police Department officers being present at the time of the attack, none of the Proud Boys were arrested for the beatdown.”

Jordan Brown is a product strategist who says he also witnessed the violence. In a Twitter post, Brown described the events, noting, “Tonight I watched the #NYPD work security for a crowd of Proud Boys while they brutally beat antifascist protesters. The only three arrests were of leftists.”

Journalist David Klion, who was also outside the Metropolitan Republican Club on Friday night, was directly critical of the NYPD’s presence. He noted:

I saw a *ton* of cops outside the Met Republican Club while McInnes was inside, yet somehow none of them were around to stop the Proud Boys from beating a man. Says a lot about who they’re there to protect.

Many commenters also noted an erroneous story by Fox News about the night’s violence:

Another false narrative blaming #Antifa for what is obviously not them. Don’t believe what you hear. This is Gavin McInnes (w/ the sword) and his alt-right Proud Boys. Last time an alt-right member brandished a sword in NY a black man was killed. Police seem awfully lenient here. https://t.co/Iut03gtKFZ

The guy with the sword founded Proud Boys, the neo-Nazi group, and was guest of honor at the GOP office in question.

If you work for or with Fox News, you’re complicit in this garbage. https://t.co/FJ5UZW3V1f

When Proud Boys leave a meeting at an establishment club of US political power and then go into the street without masks and beat people, it is a sign of the two groups merging.

Then Fox News shows them to be the victims.

These are Brown Shirts

After the commotion died down, the Proud Boys stopped to pose for a group picture.

Imagine how many arrests would already have occurred, and how many NYPD and FBI “visits” would be happening right now, if a bunch of anarchists had posed for such a picture after someone broke a Starbucks window. We see you protecting the Proud Boys, NYPD https://t.co/ha6086m13W

So far, no arrests of the Proud Boys involved have been made.

The NYPD did not respond to multiple requests for comment.