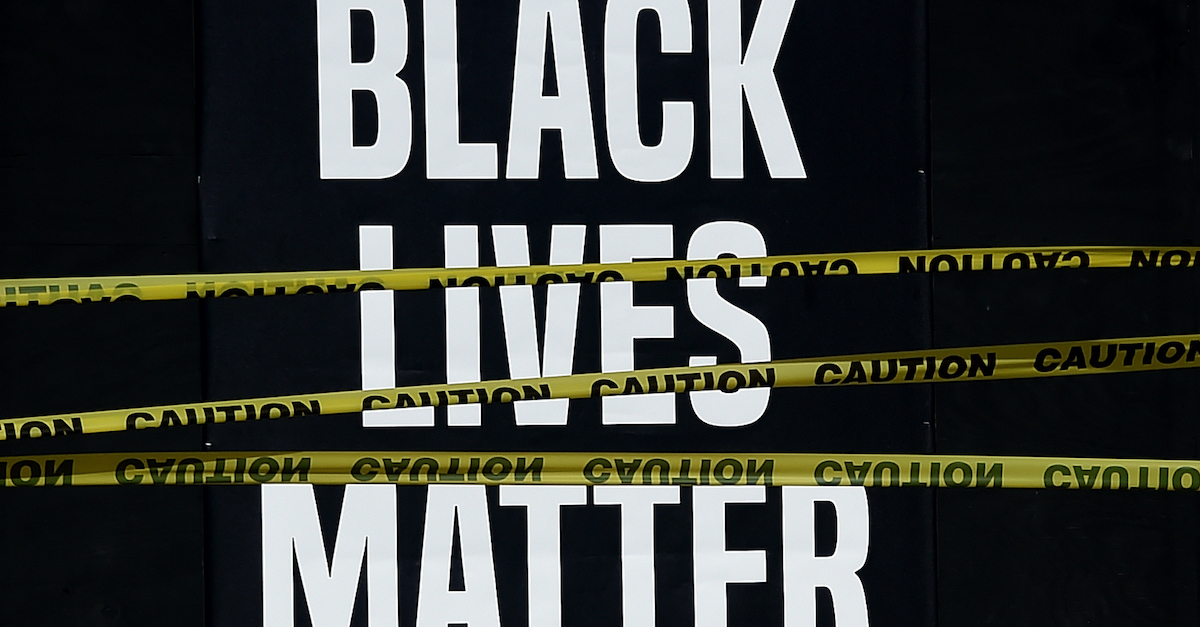 TOPSHOT – A “Black Lives Matter” placard is seen behind caution tape during a peaceful protest against police brutality and the death of George Floyd, on June 7, 2020 in Washington, DC.

BLM organized the Black Lives Matter Global Network Foundation to collect donations. But Bowers took $10 million in purported fees from donors, then “decided he could not let go of his personal piggy bank, when more than 300 movement leaders, as well as BLM Founders, insisted that he resign from GNF,” according to the complaint.

“Instead, he continued to betray the public trust by self-dealing and breaching his fiduciary duties. His actions have lead GNF into multiple investigations by the Internal Revenue Service and various state attorney generals, blazing a path of irreparable harm to BLM in less than eighteen months,” states the complaint, filed by lawyer Walter Mosley of Mosley & Associates in Los Angeles on behalf of Black Lives Matter Grassroots, Inc.

The lawsuit accuses the foundation, Bowers, his consulting firm as well as 20 unidentified conspirators of unfair business practices, intentional misrepresentation, fraud, conversion and unjust enrichment. It says Bowers diverted donations and took “calculated steps” to stop the money from being used by BLM “for on-the-ground movement work during the Buffalo Massacre and the Jayland Walker protests in Akron, Ohio,” and he continues to raise donations in BLM’s name.

“While BLM leaders and movement workers were on the street risking their lives, Mr. Bowers remained in his cushy offices devising a scheme of fraud and misrepresentation to break the implied-in-fact contract between donors and BLM,” according to the complaint.

Bowers denied the accusations in a statement released through the Global Network Foundation’s board that said he called them “harmful, divisive and false.”

“It only gives fodder to right-wing media’s clear agenda of sowing distrust and division among Black folks, and it is in deep contrast to abolitionist values and the fight for Black liberation,” the statement said.

Bowers has not yet formally responded to the lawsuit, and a case management conference is not scheduled until April 24, 2023.

The lawsuit details the history of BLM, founded in 2013 by Patrisse Cullors, Alicia Garza and Opal Ayo Tomet and galvanized by the protests in Ferguson, Missouri, after police killed Michael Brown, Jr., in August 2014. It grew to 40 chapters by 2016, with leader Melina Abdullah and others organizing BLM Grassroots in 2019.

Cullors, the foundation’s executive director, created a support fund in 2020 “to de-centralize governance over the unprecedented funds raised for BLM,” then hired Bowers and his Bowers Conulting agency to assist, according to the complaint.

Cullors decided to step back from her leadership role in May 2021, giving co-leadership duties to Bowers and Abdullah.

The complaint doesn’t mention that Cullors has herself been accused of mishandling BLM donations, with the media reports about her pricey real estate purchases in April 2021. Instead, the complaint says Cullors wanted to step back from her public role because of daily attacks on social media and credible death threats that she said had taken a heavy toll.

Cullors enlisted organizers Monifa Bandele and Makani Tehmba to be the foundation’s executive directors, but the complaint says Bowers refused to turn over financial documents to them and eventually ran “these well-respected advocates out of the organization.”

“Through a series of misrepresentations and unauthorized backroom dealings, Mr. Bowers managed to steal control over GNF as the sole Board member and officer,” the complaint says.