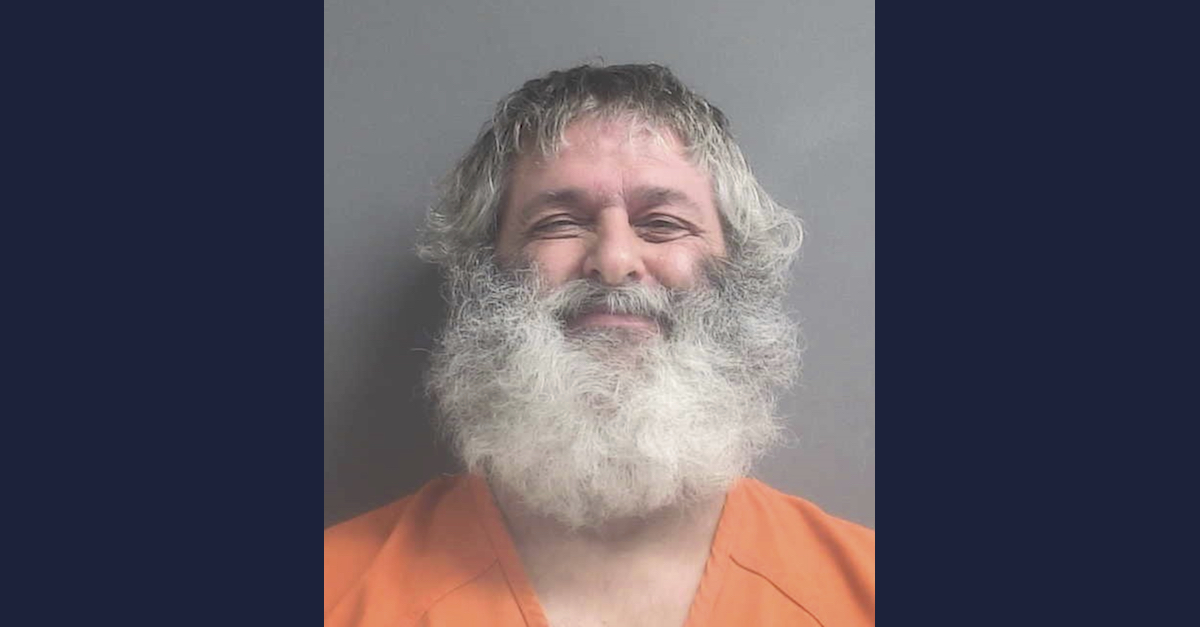 Mark Greenburg smiles in a mugshot

A Florida man was arrested late last week for allegedly making an extended series of unnerving statements to a 6-year-old girl.

Mark Greenburg, 55, stands accused of one count of aggravated stalking of a person under 16 years of age, according to Volusia County Branch jail records reviewed by Law&Crime.

In a Facebook post, the Volusia Sheriff’s Office said the arrest occurred after the alleged victim’s father and neighbor reported a “long pattern” of “harassing behavior” toward the girl and other Deltona, Fla. residents.

“The arrest followed a series of complaints from close to a dozen witnesses who have reported his behavior, including at least 11 incidents reported to the Sheriff’s Office over the past eight months,” the VSO wrote. “Those reports involved Greenburg harassing neighbors, yelling at them and their kids using a megaphone, and driving past houses while recording children on his phone.”

A sheriff’s deputy elaborated on those allegations in comments captured by another officer’s body-worn camera.

“His daughter, who’s six years old, was crossing the street and Mark Greenburg came out and was like: ‘I’m gonna turn you into a woman, I’m gonna take you to Disney World, I’m gonna make you famous,'” Deputy Baldwin said, while making hand motions, to refer to the girl’s father and a whisper-like state of quiet. “He’s saying yesterday he was telling the kids to be quiet [and] come to–come to him.”

Sheriff’s deputies responded to the neighborhood in question on Friday night after the girl’s father allegedly reported “several unusual comments” that that defendant allegedly made to his daughter while she was playing outside. According to the VSO, Greenburg also said he would make the 6-year-old a “big girl.”

In comments to Orlando-based CBS affiliate WKMG, neighbors said the defendant had annoyed many with his offensive comments for quite some time and they were happy to see him arrested.

“We just had to come together and get it all taken care of as a neighborhood,” Deltona citizen Austin Franco told the TV station. “He got tired of us not doing anything to him or responding to him and he started to bring in the kids into it and that’s when a month, two months, calling the kids’ names, researching the kids’ names, finding out where they lived.”

According to an incident report obtained by WKMG, Greenburg is also believed to have followed the 6-year-old girl to her grandmother’s house in an entirely different neighborhood and waited outside in his car to take pictures. The girl and her father, deputies alleged, had been scared to go outside for some time.

Another neighbor said the defendant had also made other threats and employed racial slurs in the recent past.

“He actually used the N word toward…myself and another neighbor and he also made threats that day and in the past about what he wants to do us,” a resident identified only as Shawn told the TV station.

In the body camera footage, the defendant doesn’t question his arrest but asks for deputies to let him lock up his own house.

“Deputies attempted to speak to Greenburg Friday evening, but he refused to answer the door and said he would talk another day,” the VSO said. “After obtaining a warrant, deputies with the Deltona Crime Suppression Team returned Saturday and arrested Greenburg without incident.”

According to court records reviewed by Law&Crime, the defendant is charged with a felony offense but no public documents have been filed on the docket for his case as of this writing.