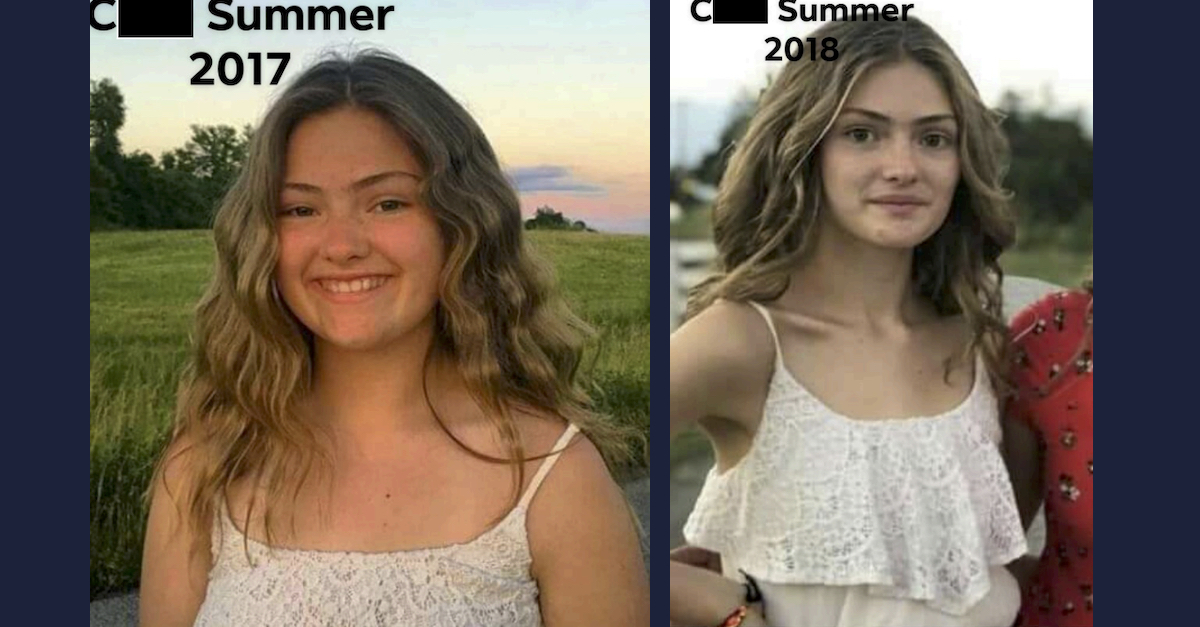 Two federal lawsuits were filed against Instagram’s parent company Meta this week accusing the social media giant and its influencer-heavy product of causing and contributing to eating disorders and numerous other mental health problems in teenage girls.

One lawsuit was filed by Candace Wuest and her daughter, identified only as CN. The complaint alleges that CN became addicted to Instagram shortly after first using the app at the age of 12 to find and share recipes with her mother. The lawsuit claims CN would go on to attempt suicide on multiple occasions after the algorithm started to push several forms of content that encouraged disordered eating.

“Candace Wuest was unaware of it at the time, but Meta’s inherently dangerous algorithms and recommendation systems had escalated CN from delicious recipes to healthy recipes and then to dangerous recipes — for example, recipes designed to achieve negative caloric intake,” the filing says. “Meta’s inherently dangerous algorithms and recommendation systems began recommending to CN and connecting CN with users, user groups, and content that provided her with tips and tricks on how to hide the fact that she was not eating.”

The lawsuit documents additional disordered eating content the girl was allegedly exposed to by the Instagram algorithm:

Meta also began flooding CN’s Explore page with images of excessively thin models, focusing on thigh gaps, bridge gaps, and clavicle bones. Meta’s proprietary algorithms recommended and promoted content with hashtags like #pro-ana [pro-anorexia] and #thinspo. These are not terms CN searched for but, rather, content Meta’s recommendation system sent to her. CN would open her Explore page and the content was simply there, in mind blowing volumes.

Soon enough, the onetime star student’s grades and life took a turn for the worse, the filing alleges. She was forced to leave an advanced high school after “her life-long honor roll track record [had] become Ds and Fs.” In August 2018, one day after a shopping trip where she “almost passed out,” CN was taken to a hospital emergency room.

“Cincinnati Children’s immediately identified the issue quickly, and told Candace that CN was going into heart failure,” the filing says. “CN was admitted for anorexia nervosa within about an hour and transferred to Cincinnati Children’s Liberty Campus, where she was hospitalized for two and a half weeks.”

The filing recounts the struggle the Wuest family has been through in the several years since CN first logged into the app:

Over the last four years, Plaintiffs CN and Candace Wuest have survived 10 hospitalizations, including one residential stay and two active suicide attempts, because of Instagram’s inherently harmful and dangerous social media product. During CN’s multiple hospitalizations and one long term residential stay, she had to be “tubed” multiple times. She refused to eat to the point where a feeding tube was necessary. And when she tried to eat, CN felt so much anxiety and guilt that she would engage in self-harm. To this day, her arms, stomach, legs, and ankles are scarred with those markings of suicidal ideation and self-injury – what Meta refers to internally as “SSI,” an injury Meta knows it is causing to young girls like CN.

The second lawsuit contains largely verbatim recitations of the general facts and legal arguments against Meta and Instagram. That lawsuit was filed by Alexandra “Alex” Martin, who is now 19, and her parents, Benjamin Martin and Jennifer Martin.

The Martin lawsuit notes that Alex Martin also began using Instagram at the age of 12 and relays a strikingly similar story about the eventual slide into a cycle of what Instagram itself terms “problematic use” and eventual health issues leading up to a dangerous eating disorder and attempted suicide.

“Meta knew or should have known that she was under the age of 13, however, Meta designed its product to encourage such illegal and unauthorized use, and in a manner that encouraged Alex to eventually open multiple accounts, including secret accounts her parents did not know about,” the filing alleges. “Meta created a ‘perfect storm’ of addiction, social comparison, and exposure to incredibly harmful content and product features, then operated its algorithms to push and promote harmful content.”

By late 2016, Alex Martin was hospitalized for the first time because “her heart was failing,” the lawsuit says; it also indicates she was diagnosed with anorexia.

“Alex would make up what she had eaten that day, so that her parents did not worry,” the filing says. “She would take food out of wrappers and hide the food at the bottom of the garbage can, while putting the empty wrappers at the top. She would pretend to eat at dinner with her family, but then spit food into her napkin or feed it the family’s dogs.”

The former athlete who can no longer compete as a result of her lost strength and stamina from her illness eventually tried to take her life “by overdosing on pills” in May 2019, the lawsuit says.

“In November 2019, Alex tried to commit suicide a second time, also with pills, and was admitted to Good Samaritan for five days,” the filing continues. “After that Alex got back in recovery, attended her therapist and dietician appointments, and started to get better . . . until she relapsed in May of 2020 and then started eating and purging (bulimia). After Ben and Jennifer found out about the bulimia, they got her admitted to a facility in Tennessee called Fairhaven, and she was admitted for inpatient treatment until sometime in July 2020.”

The near-tragic results in both cases, the plaintiffs say, were predictable and more or less predicted by Meta itself.

Addiction, anxiety, depression, sexual exploitation, grooming, suicide, self injury — all of these problems are currently running rampant among teenagers in the United States, the lawsuits say. Both of the filings allege that internal company documents acknowledged “a causal relationship between use of Meta’s Instagram social media product in its current form” and some of those crises.

The lawsuits refer to internal documents as “The Facebook Papers,” many of which have been and are currently being published in iterative form by technology news website Gizmodo. The documents were originally leaked to the U.S. Securities and Exchange Commission and Congress by a whistleblower in late 2021.

Dozens of the Facebook Papers are incorporated into the lawsuits.

“The Facebook Papers prove known dangerous designs and design defects as well as operational decisions and calculations, and a causal relationship between use of Meta’s Instagram social media product in its current form and resulting addiction, anxiety, depression, eating disorders, exploitation and grooming, and what Meta internally refers to as ‘SSI’ (Suicide and Self Injury),” each of the filings says. “The Facebook Papers include years’ worth of studies and reports, often referred to by Meta as ‘experiments,’ discussing the fact that Meta’s social media products are addictive and harmful, and that use of those products can and does lead to serious mental health issues in a significant number of users.”

The lawsuits reference internal studies conducted by Meta that looked into the impact Instagram’s features have on children, including several slides from presentations on the studies’ findings.

The lawsuit points to one such slide from a study titled “Teen Girls Body Image and Social Comparison on Instagram” and argues as follows:

Meta refers to its “product mechanics” as “addicting” and recognizes that it is not certain body-focused celebrity content shown on Instagram causing harm, but rather, the sheer volume at which Meta’s social media product identifies and targets individual users (in particular, teen girls) with that body-focused content. Indeed, this is not even content these users have searched for or, in many cases, want to see – but rather, it is content (including advertisements) Meta itself has programmed its product, algorithms, and other technologies to target at individual users as a means of increasing engagement and addiction; and, in turn, Meta’s revenue and competitive positioning.

In sum, the plaintiffs allege Meta knows about the harm they are causing – and have known for years – but have not taken sufficient steps to stop such harm.

“Meta exerts an unprecedented level of manipulation and control over its users and is knowingly directing harmful content to users as a matter of its algorithmic programming and settings Meta chooses as part of its prioritization of engagement over user safety. Meta has dozens of studies confirming these allegations,” plaintiffs claim.

“The fact that these two young women fell victim to life threatening eating disorders was neither an accident nor or a coincidence but rather the expected consequence of Meta’s deliberate design decision to elevate user engagement over safety,” attorney Matthew Bergman told Law&Crime. “Meta knew that Instagram cases young women to suffer from depression, anxiety and eating disorders but cancerously chose profits over people.”

The lawsuits rely on several causes of action including federal and state claims for product liability, unjust enrichment, unfair competition, and invasion of privacy. The plaintiffs are seeking various forms of damages.

CN wrote a letter during her first hospital stay that took aim at social norms for young people in the United States. An excerpt from that letter, which is also included in the lawsuit, reads:

You always expect everyone to live up to certain standards. This is not always fair because some people may have more to them under the surface. Ya know? I really think you should take this into consideration. My self-esteem along w/ many others is super low because of you and the images you portray.

I value certain talents I have and I’d like to see those abilities more than just my body and appearance. Please society stop making all these innocent teens and youth want to harm themselves and hurt their mentalities with viscous [sic] and cruel lies you stuff their brains with. We are such much more than how we look, act, and abilities that aren’t useful like modeling or following current trends.

Law&Crime reached out to Meta, but the social media giant declined to comment given pending litigation.

Both of the lawsuits are available in full below:

[image via CN and Candace Wuest]