Houston Cops ‘Molested’ Female Deputies During Undercover Stings, Forced One to Be ‘Penetrated in Both Her Vagina and Anus’ by ‘Known Rapist’: Lawsuit 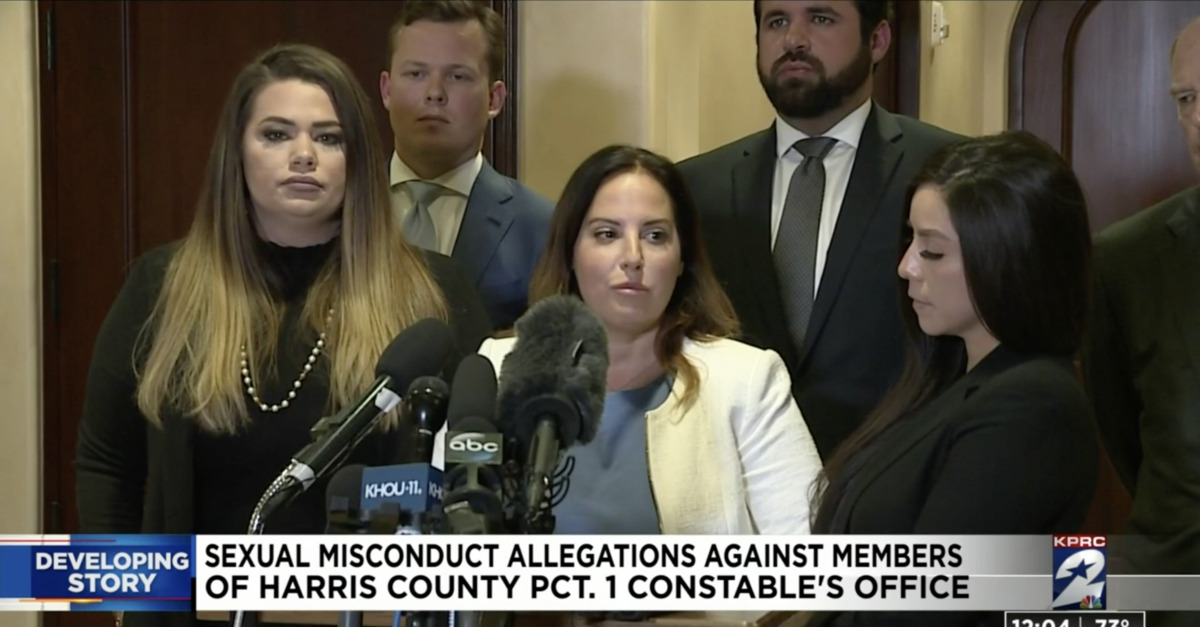 Former and current female law enforcement officers in Texas were sexually harassed, kissed, fondled by and assaulted under the direction of their supervisors during sex work-related sting operations, a lawsuit filed in federal court on Monday alleges.

Those attempts to secure solicitation charges were little more than a pretext to prey on the women involved, the plaintiffs say.

“[Y]oung female deputies [who] were handpicked for ‘undercover operations’ under the guise of legitimate police work were molested and traumatized by their intoxicated male commanding officers for their own sexual gratification,” the lawsuit alleges. “What began as an idea for ‘bachelor party’ prostitution stings soon grew into a booze-fueled playground for sexual exploitation in which young, untrained deputies were subject to disgusting abuse.”

Describing herself as an “inexperienced Deputy Officer,” lead plaintiff Liz Gomez alleges Gore “hand-picked” her despite her lack of training for undercover operations in general or sexually-charged operations specifically. Gomez claims that she was “continuously subjected to sexual harassment, unwarranted touching, unwanted kissing, molestation, and sexual ridicule.”

Gomez was then ordered to try on the dresses for Gore in his office.

Gomez was ordered to accompany Chief Gore to an adult sex shop where he would “pick out some props” and “work on chemistry” with her. After picking up a product labeled “cock sleeve,” Chief Gore commented to the young female deputy “oh I bet you would like this.” He also instructed Gomez to purchase dildos and to “pick out the ones you would personally prefer.” These sex toys were paid for with County funds. This trip to the sex shop was also the first of several instances where Chief Gore told Liz Gomez she was not allowed to work with any other male deputies…she was “his.” 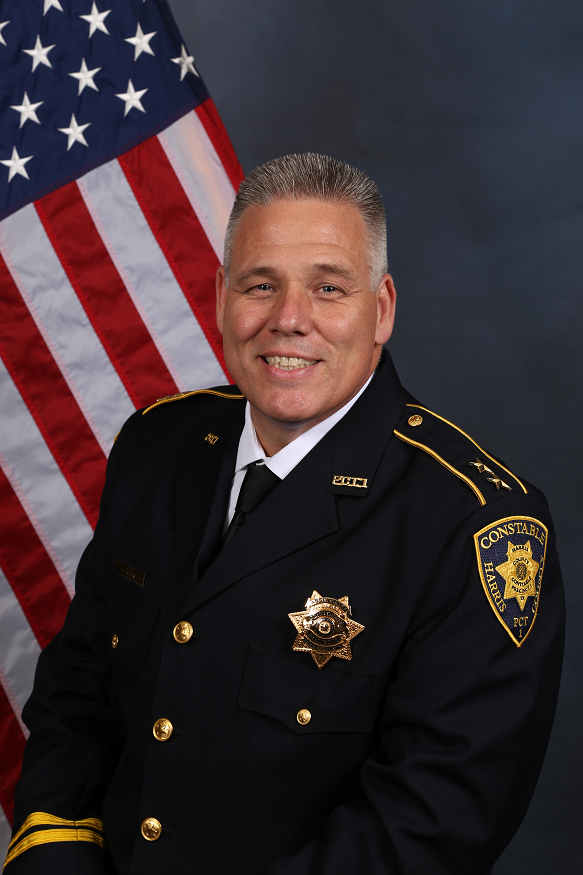 “Female deputies were ordered to purchase and wear revealing clothing for these operations,” the lawsuit continues. “Each of them was ordered that during these operations ‘to maintain cover’ Chief Gore would be lying down on top of them, fondling their breasts and bodies. They were never warned, however, that during this conduct Chief Gore would be wearing only boxer shorts, fully aroused, drunk, kissing and licking their bodies, and giddy after every sting. Each time Chief Gore molested Liz Gomez during these County-sanctioned operations, she would be fighting back the urge to break down in tears.”

Gore is also alleged to have instructed his deputies not to include his name on incident reports following the conclusion of the stings.

“This instruction was given despite the fact that quite obviously Chief Gore would be an eyewitness to the conduct giving rise to a potential arrest, in violation of criminal discovery statutes,” the lawsuit claims.

Gomez went through two undercover operations before asking to be transferred. The lawsuit says that her request was only “reluctantly granted” after “ridicule and denigration.”

Marissa Sanchez claims she was ushered into the fold by “male superiors” who forced her to give another male superior a lap dance.

The second plaintiff relays a remarkably similar story to the first:

Like Gomez, Sanchez was told “if the scenario calls for it, you may need to take off your clothes.” As the first suspects arrived and the sting began, Chief Gore immediately took off Sanchez’s bra without warning and for no real reason. He then threw her bra across the room. This conduct would become his routine at the beginning of every single operation. While her breasts and naked body were exposed due to Chief Gore’s actions, he would continuously laugh, even after the undercover operation ended.

Chief Gore would maneuver his body on top or under Sanchez, where she could feel his arousal. Chief Gore also would immediately begin kissing and licking Sanchez’s neck and chest. Chief Gore was intoxicated during these assaults due to the shots of hard liquor he insisted all undercovers consume before and during operations and the cases of beer the male deputies consumed throughout the operations.

“Sanchez would then face inappropriate comments and treatment at the Constable stationhouse between stings from her male superiors, including Chief Gore and Lt. Shane Rigdon commenting on how her body looked naked,” the filing continues.

In addition to the alleged sexual misconduct, Sanchez alleges that Gore became personally infatuated with and possessive of her and that he made “inappropriate comments about [her] boyfriend and personal relationship” due to his “personal jealousy.”

“Chief Gore was going to get what he wanted, regardless of how,” the Sanchez section of the lawsuit alleges.

Felecia McKinney’s story might be the most startling of all.

According to the 40-page filing, Rosen and Gore sent her undercover into a massage parlor in 2019 with the instruction that she had to be raped–by someone accused of recently sexually assaulting Gore’s own chief of staff–before alerting her backup.

Again the lawsuit [emphasis in original]:

McKinney was ordered to enter the parlor in an undercover capacity and wait to be sexually assaulted to give the raid signal. When McKinney asked why they would need to be assaulted, they were told “the boss says we have to do this op.” “The boss” refers to Alan Rosen. There was already sufficient evidence to make an arrest prior to exposing McKinney to this trauma.

McKinney was ordered to make an appointment at the establishment with the known sexual deviant. At said appointment she was, unsurprisingly, penetrated in both her vagina and anus by the same individual who had only days before assaulted the HCCO-1 staff member. McKinney was forced to allow this to happen as she was ordered to do by her superiors. In order to appease HCCO-1 supervisors and comply with orders, McKinney was sent in to disrobe with a known rapist, like a lamb to the slaughter, and allow him to assault her. Only after the assault was she ordered to give the ‘bust’ signal so that an arrest could be made.

Authorities at the highest level are aware of the sting operations and the complaints leveled against them–and whistleblowers have been dismissed, ignored and retaliated against in violation of the law, the plaintiffs claim.

“Both Constable Rosen and the Harris County District Attorney’s Office have known about this abuse for months, but they refused to take any action and rebuffed anyone who complained,” the lawsuit alleges. “Three of the young deputies spoke up about their abuse to their supervisors at the Constable’s Office, including Constable Rosen’s chief of staff, but they were ridiculed by their commanders, retaliated against by their abusers, and quietly reassigned to less prestigious duties.”

Additionally, the women claim that human rights advocate Jacquelyn Aluotto came forward on their behalf–but was quickly fired by Harris County after doing so.

Rosen responded with the following statement:

When we were made aware of a concern by a third party several months ago, I proactively instructed our Internal Affairs Division to conduct an investigation. We did this even though no one made a formal complaint. This is consistent with our ongoing commitment to protecting victims and our personnel. My sensitivity toward victims remains our highest priority.

To this day, not one of these plaintiffs has ever made a formal complaint. Each employee interviewed was given the opportunity, in a safe environment, to express any concerns. Their own interview statements contradict many of the allegations in the lawsuit. Upon conclusion of our internal investigation, our Administrative Disciplinary Committee found no violations of law or policy.

When we began our proactive internal investigation, we immediately transferred leadership of the Human Trafficking Unit to another supervisor who still maintains oversight of that unit today. VICTIM’S VOICES MATTER. I have a zero-tolerance stance against sexual assault and sexual harassment and would never allow a hostile work environment as alleged. This lawsuit is an effort to impugn the good reputation of the hard-working men and women of the Precinct One Constable’s Office. I believe our system of due process works and that justice and truth will prevail as facts in this case come to light. We will have no further comment today on this matter.

Law&Crime reached out to the Human Trafficking division for additional comment on this story but no response was forthcoming at the time of publication.