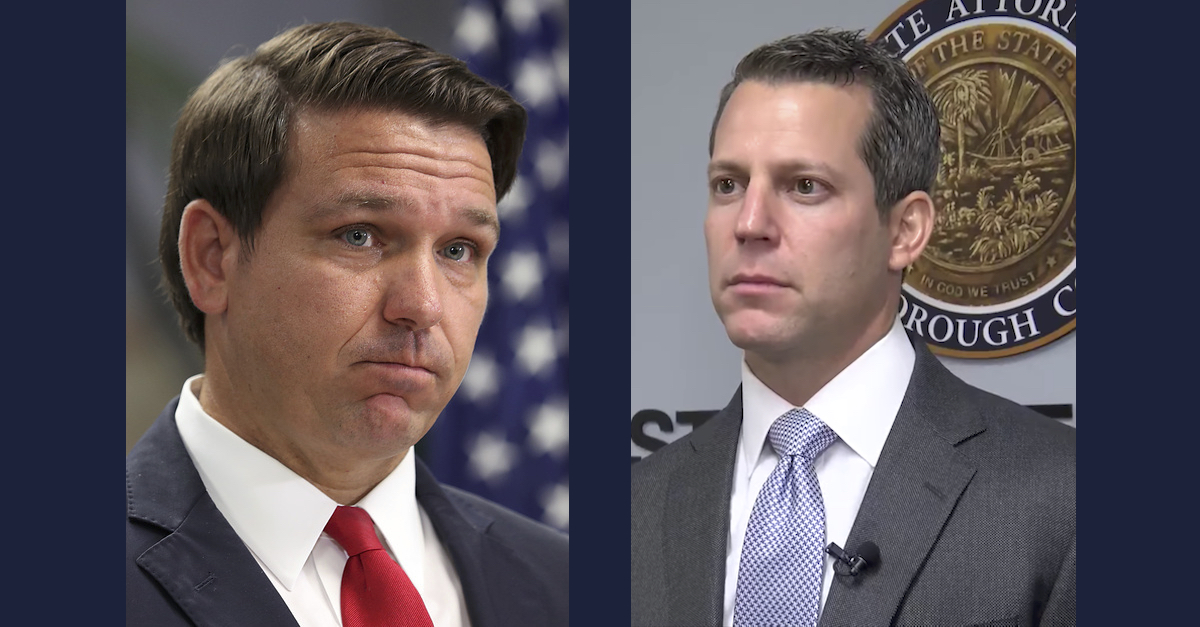 Earlier this month, the twice-elected Hillsborough State Attorney, who represents the City of Tampa, was suspended for what DeSantis termed “neglect of duty” and for being “incompetent” to hold the office after Warren publicly pledged he would not pursue criminal cases for violating Florida’s new 15-week abortion ban.

Warren was “surprised” by the move and escorted out of his office by an armed sheriff’s deputy, he says, without warning. He vowed to fight the suspension and made good on that promise in a 28-page lawsuit filed with the U.S. District Court for the Northern District of Florida.

“Warren brings this lawsuit to confirm that the First Amendment still applies even though DeSantis is the Governor of Florida and that the Constitution of the State of Florida means what the courts say it means, not whatever DeSantis needs it to mean to silence his critics, promote his loyalists, and subvert the will of the voters,” the filing says in an introductory passage.

Regarding the first two reasons cited by DeSantis for Warren’s dismissal, the lawsuit says, the statements actually had nothing to do with any law or law enforcement activity in the state or jurisdiction.

“No decision on any case ever considered by Warren while in office was impacted by these statements,” the lawsuit says. “Statements of opinion on matters of public debate do not relate to incompetence within the meaning of the Florida ConstitutionThe Order’s cited justifications for Warren’s suspension are facially insufficient under Florida law.”

The Gender Statement nowhere contained a statement that Warren categorically planned not to enforce any specific law. Indeed, Florida has no such law.
…
[H]is signature on this letter does not relate to neglect of duty, or the failure “to do and perform some duty or duties laid on him as such by virtue of his office or which is required of him by law,” as none of the clauses in the Order set forth any allegation that Warren has refused to enforce any specific law.
…

Warren’s signature on the Abortion Statement also cannot relate to “incompetence,” or “any physical, moral, or intellectual quality” that Warren is lacking that “incapacitates” him from performing the duties of his office.

No decision on any case ever considered by Warren while in office was impacted by these statements.

In other words, Warren argues, DeSantis’ complaint about transgender issues wasn’t based on any actual law on the books. The abortion-related complaint cited by the governor, Warren goes on to say, was moot because there hasn’t been any criminal abortion activity alleged in Tampa during his time as prosecutor.

Those points are reiterated again in less legalistic language in a separate section of the lawsuit discussing how DeSantis and his communications team shared and defended the news of Warren’s suspension during a “media blitz.”

The governor, the lawsuit says, “told Fox News’s Tucker Carlson that he was suspending Warren because ‘he actually signed letters saying he wouldn’t enforce laws against transgender surgeries . . . laws protecting the right to life.'”

“Florida has no law regarding ‘transgender surgeries,’ whatever that means,” the lawsuit continues. “And at no time while in office has Warren ever been referred a case involving a request to prosecute abortion-related crimes.

In response to the non-prosecution polices, the filing argues, they are not “blanket” bans on prosecuting certain crimes, but presumptions that can be overcome if “the public safety needs of the community outweigh the presumption to not file the case.” Additionally, Warren argues, those policies are part-and-parcel of “settled” prosecutorial discretion.

“Warren has also been clear with voters that he will not blindly prosecute to obtain convictions wherever possible and instead exercises his discretion and pursues common-sense solutions that further the ultimate goal and job of every prosecutor: seeking justice,” the filing goes on before citing various state and federal precedents regarding prosecutorial discretion.

“The State Attorney serves a ‘unique role’ ‘both as quasi-judicial and quasi-executive,'” the filing reads. “His or her discretion ‘in deciding whether and how to prosecute’ is ‘absolute.'”

Largely based on the First Amendment and seeking his reinstatement as prosecutor, Warren also alleges that DeSantis acted in “excess of the powers” granted to the governor under the Florida Constitution.

“A difference of opinion is not ‘incompetency’ as defined by the Florida Constitution,” the lawsuit says. “Neither is the exercise of ethically and constitutionally required prosecutorial discretion.”

In seeking a writ of quo warranto, the ousted prosecutor is essentially accusing DeSantis of what Warren was himself accused of by the governor: acting beyond his legal authority.

“It’s not surprising Warren, who was suspended for refusing to follow the law, would file a legally baseless lawsuit challenging his suspension,” DeSantis’ Press Secretary Bryan Griffin said in a statement to Law&Crime. “We look forward to responding in court.”

The original petition is available in full below:

[image of DeSantis via Joe Raedle/Getty Images; Warren via screengrab/WFLA]