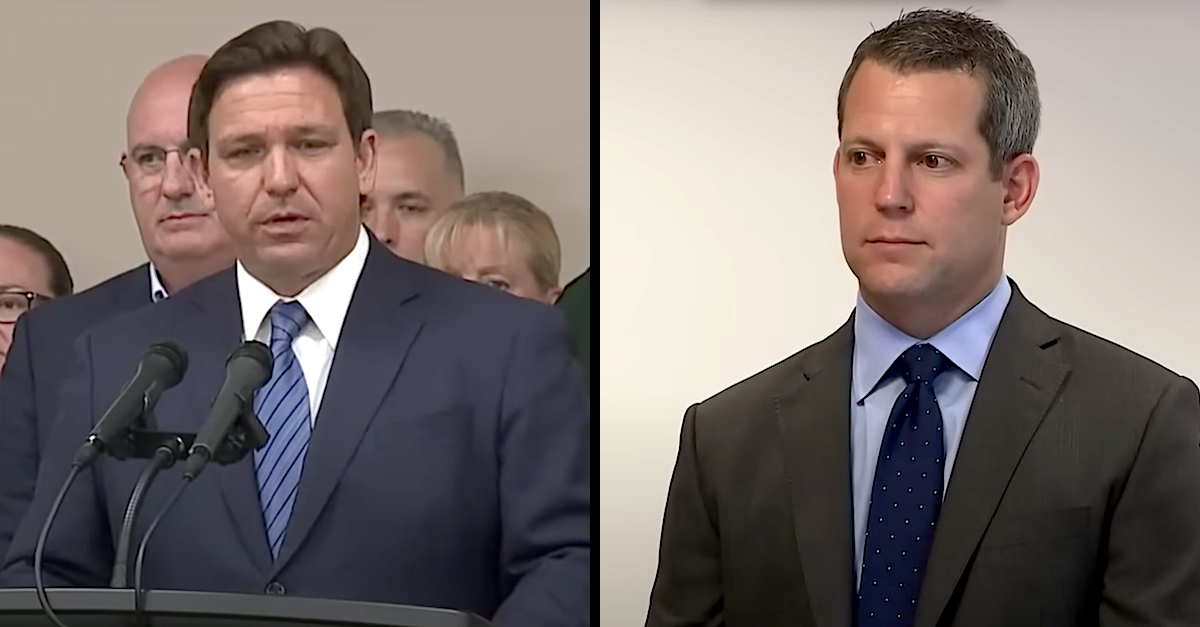 An elected Florida county prosecutor accused Gov. Ron DeSantis (R) of “illegal overreach” for suspending him for pledging not to pursue criminal cases against anyone for violating Florida’s new 15-week abortion ban.

State Attorney Andrew Warren, a Democrat, is the elected prosecutor for Hillsborough County, which encompasses the City of Tampa. Warren was among the 90 elected prosecutors across the nation — and the only from Florida — who signed a June 2022 pledge railing against criminal abortion statutes passed in the wake of SCOTUS’ decision in Dobbs v. Jackson Women’s Health Organization.

The prosecutors said in a written statement that they have “a responsibility to refrain from using limited criminal legal system resources to criminalize personal medical decisions,” and that criminalizing abortion “will erode trust in the legal system, hinder our ability to hold perpetrators accountable, take resources away from the enforcement of serious crime, and inevitably lead to the retraumatization and criminalization of victims of sexual violence.” It ended with the vow, “Our legislatures may decide to criminalize personal healthcare decisions, but we remain obligated to prosecute only those cases that serve the interests of justice and the people.”

Warren also signed on to a similar letter in 2021 that said “Bills that criminalize safe and crucial medical treatments or the mere public existence of trans people… serve no legitimate purpose,” and pledged to use prosecutorial discretion to forego enforcement of laws that criminalize the provision of gender-affirming care to transgender youth.

Gov. DeSantis issued a 10-page Executive Order on Thursday morning suspending Warren. In it, the governor said Warren “demonstrated his incompetence and willful defiance of his duties as a state attorney,” and referenced the two pledges Warren signed. DeSantis said that “it is in the best interests of the residents of the 13th Judicial Circuit that they immediately have a new state attorney who will faithfully execute Florida’s criminal laws,” suspended Warren without pay, and appointed County Court Judge Susan Lopez as State Attorney for Hillsborough County.

Who is the new prosecutor for Hillsborough County (one of largest in #Florida)?

Warren fired back in a statement that called the suspension a “political stunt” that “is an illegal overreach that continues a dangerous pattern by Ron DeSantis of using his office to further his own political ambition.” Warren tweeted, “It spits in the face of the voters of Hillsborough County who have twice elected me to serve *them*, not Ron DeSantis.”

Today’s political stunt is an illegal overreach that continues a dangerous pattern by Ron DeSantis of using his office to further his own political ambition. It spits in the face of the voters of Hillsborough County who have twice elected me to serve *them*, not Ron DeSantis… pic.twitter.com/RzPXksSSWa

Warren also noted in a tweet that “crime is low” in Hillsborough County, and that “our Constitutional rights—including the right to privacy—are being upheld & the people have the right to elect their own leaders—not have them dictated by an aspiring presidential candidate who has shown time & again he feels accountable to no one.”

In our community, crime is low, our Constitutional rights—including the right to privacy—are being upheld & the people have the right to elect their own leaders—not have them dictated by an aspiring presidential candidate who has shown time & again he feels accountable to no one.

Warren then aimed a separate tweet squarely, if indirectly, at DeSantis.

Just because the governor violates your rights, it doesn’t mean they don’t exist.

Warren’s suspension caused the last-minute cancellation of a press conference that had been scheduled to discuss what Warren said was a “major development” in the 1983 rape and murder case of 19-year-old Barbara Grams. Robert DuBoise was convicted of the crime and served 37 years in prison before he was exoneration in 2020 with the help of DNA evidence. The 13th District’s Conviction Review Unit, under Warren’s supervision, worked with the Florida Innocence Project to investigate DuBoise’s  innocence.

Gov. DeSantis’ office did not respond to request for comment.