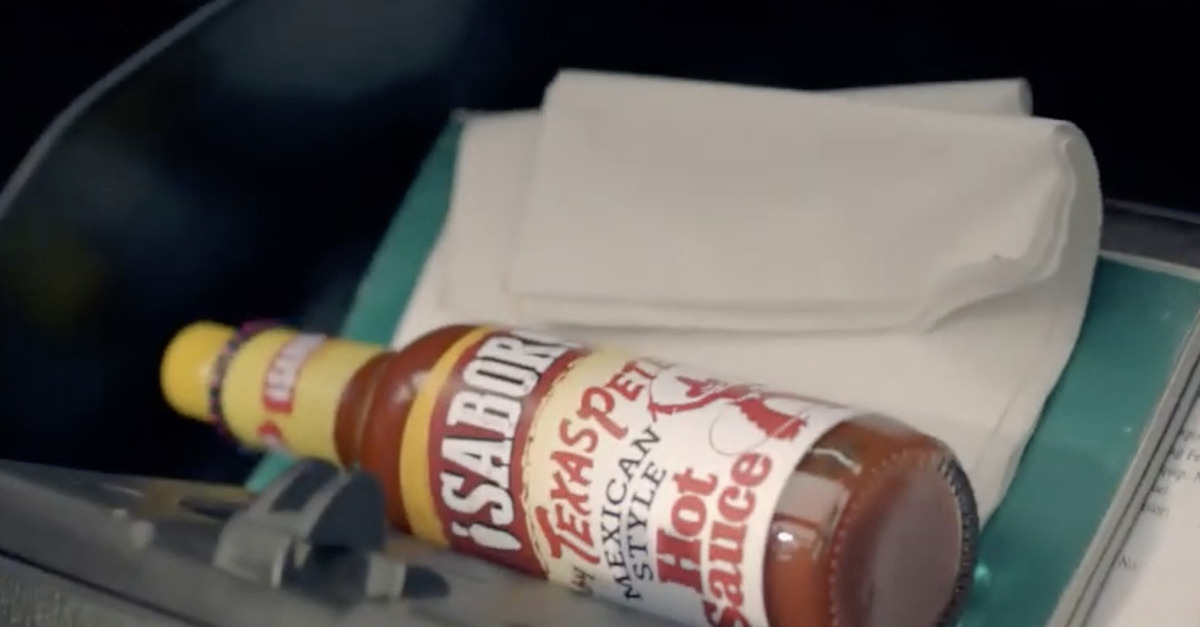 A California man filed a class action lawsuit against the makers of Texas Pete hot sauce alleging that consumers have been cheated, because the sauce is made in North Carolina — and not in Texas.

Philip White and his lawyers are say the sauce’s labeling amounts to fraud, and he seeks an injunction as well as compensatory and even punitive damages for the company’s practices.

White filed a 49-page complaint in federal court in California against T.W. Garner Food Co., which is headquartered in North Carolina. White said the company “cheated its way to a market-leading position in the $3 billion-dollar hot-sauce industry at the expense of law-abiding competitors,” and that consumers would never have paid so much for the sauce had they known where it was actually produced. The lawsuit specifically pointed to Texas Pete Original Hot Sauce, Texas Pete Hotter Hot Sauce, and Texas Pete Roasted Garlic Hot Sauce as the offending products.

In the complaint, White says that “there is surprisingly nothing Texas” (emphasis White’s) about Texas Pete products, because the sauces are simply “standard Louisiana-style hot sauces, made with ingredients sourced outside the state of Texas.” However, White asserts, the products are labeled with “distinctly Texan imagery,” which includes the Texas state flag and a cowboy.

The complaint goes on to allege that the choice to use references to the Lone Star State is intentional, because “the state of Texas enjoys a certain mysticism and appeal in the consumer marketplace and is known for its quality cuisine, spicy food, and hot sauce in particular.” The mis-labeling, said the plaintiff, is a way to “intentionally capitalize[] on consumers’ desire to partake in the culture and authentic cuisine of one of the most prideful states in America.”

White’s lawsuit includes a bit of a primer on hot-sauce cuisine:

It continues, breaking down just what an authentic Texas hot sauce might include:

Texas foods and flavors, like many other things in Texas, are unique to their geographic location and culture. For example, Texas’s hot, dry climate is ideal for pepper production. For this reason, the pepper has become the backbone for a great deal of Texas cuisine. To illustrate, the chiltepin pepper, the only wild chili that is native to the United States, was designated the official native pepper of Texas in 1997. Additionally, Texas declared the jalapeño its official state pepper in 1995.

The complaint explains that not only does Texas have a rich history that culminated in Tex-Mex cuisine, but also that Texans celebrate their iconic peppers at multiple pepper and hot sauce festivals across the state.

The plaintiff alleges that the Texas-centric labeling violates both the California Consumers Legal Remedies Act, which bans “deceptive representations or designations of geographic origin in connection with goods or services,” and the Federal Trade Commission guidelines which prohibit mislabeling products as having been made in the United States. White also claims violations of federal and state unfair competition laws, breach of warranty, and unjust enrichment.

White asks the court for an injunction to stop the hot sauce makers from continuing to deceive consumers, as well as for compensatory and punitive damages.

The Texas Pete hot sauce website specifically addresses the issue of the product’s origin, and features the question, “So how is it that a tasty red pepper sauce made in North Carolina happens to be named ‘Texas Pete’ anyway?”

Legend has it that, when Sam Garner and his three sons, Thad, Ralph and Harold, were trying to come up with a brand name for this spicy new sauce they had created, a marketing advisor suggested the name “Mexican Joe” to connote the piquant flavor reminiscent of the favorite foods of our neighbors to the south. “Nope!” said the patriarch of the Garner family. “It’s got to have an American name!” Sam suggested they move across the border to Texas, which also had a reputation for spicy cuisine. Then he glanced at son Harold, whose nickname was “Pete” and the Texas Pete cowboy was born. Movie cowboys were very popular in the 1930’s, men like Tom Mix and Hopalong Cassidy, representing a sort of universal image of rugged independence and self-reliance, the perfect ideal for a family business trying to survive tough times. Actually, Texas Pete Hot Sauce was not the first product the Garner family made and sold. That distinction belonged to Garners’ Barbecue Sauce.

The hot sauce case against T.W. Garner Food Co. is reminiscent of a 2020 lawsuit filed against King’s Hawaiian, which made similar claims against the company for allegedly misrepresenting that its sweet rolls were made in Hawaii.

A representative for T.W. Garner Food Co. told Law&Crime Monday that it is aware of the current lawsuit and that “we are currently investigating these assertions with our legal counsel to find the clearest and most effective way to respond.”

Counsel for the plaintiff did not immediately respond to request for comment.