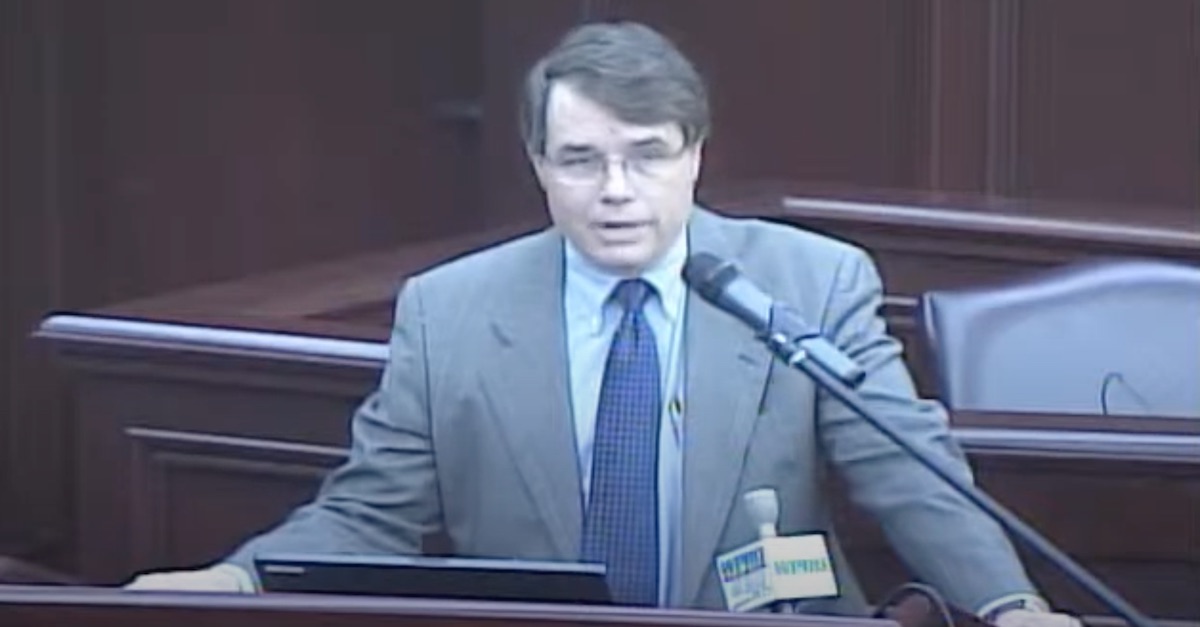 A George W. Bush-appointed federal judge on Tuesday dismissed what he called an “ambitious” but important lawsuit filed by parents on behalf of young public school students who had asked the court to declare civics education coursework in Rhode Island so woefully inadequate and harmful to the plaintiffs’ futures that the Constitution was violated. Judge William Smith, before dismissing the lawsuit as “Supreme Court holdings” required of him, spent dozens of pages describing a “Democracy in Peril.”

Judge Smith went so far as to include criticism of President Donald Trump’s “fascistic” tweet that said, as Smith put it: “perhaps the presidential election should be delayed because of perceived ‘voter fraud.'”

With Universal Mail-In Voting (not Absentee Voting, which is good), 2020 will be the most INACCURATE & FRAUDULENT Election in history. It will be a great embarrassment to the USA. Delay the Election until people can properly, securely and safely vote???

Smith included a hyperlink to a New York Times op-ed written by Steven Calabresi, a co-founder of the Federalist Society. That op-ed, Smith noted, was written by a “prominent conservative legal scholar who called [Trump’s] behavior fascistic, and deserving of immediate impeachment and removal from office.”

Smith noted that the knee-jerk and direct rebuke of the president’s “extreme” suggestion perhaps “momentarily stiffened the guardrails of democracy,” but he went on to paint a picture of American democracy on thin ice.

“[B]ut the existential problem of creeping authoritarianism will not subside after one Tweet storm,” the judge wrote.

Although there was no direct mention of congressional hearings for Supreme Court nominee Amy Coney Barrett, Judge Smith also focused heavily on the importance of “institutional forbearance” in the political context. Eroding and ignoring institutional norms—the “rules of the game [which] are not written into our Constitution” but which nonetheless are “universally understood”—is what will bring an end to what “allow[s] us to govern and to be governed,” as the “soft guardrails of democracy” are traded away for political power:

Two of the most crucial, they argue, are mutual toleration (i.e., the idea that rivals can agree to disagree and not let every difference become a fight to the death) and institutional forbearance (i.e., the notion that political leaders will not use every drop of their power under the law to achieve their goals if to do so would violate the spirit of the law). See id. at 102-17. (A prominent historical example of institutional forbearance is the unwillingness of even popular presidents like Washington, Jefferson, Jackson, and Grant to seek a third term in office before the passage of the Twenty-Second Amendment). See id. at 107-09. The authors describe the erosion and collapse of these norms across the American landscape. See id. at 145-203. It is both these hallmarks of democracy and concomitant democratic norms that, in effect, Plaintiffs here suggest are missing from the civics education of our young people — not just education about the mechanisms of our democratic system, but its spirit; about what it means to be an American and even what America means.

We are a society that is polarized as much as any time in our history; we live in echo-chambers of cable television news shows, Twitter feeds, and YouTube videos. And political leaders, driven further and further to their extremes by their increasingly extremist constituencies, appear more willing to break through the soft guardrails of democracy to achieve their ends.

The judge said the Minneapolis police killing of George Floyd and the aftermath thereof, the politicization of face masks amid the coronavirus pandemic, the deployment of federal troops to quell Black Lives Matter protests, the burning and vandalization of court houses, Russian interference in the 2016 election, and the very existence of the right-wing conspiracy theory QAnon all point to a democracy under siege by the ghosts of its past and increasing “illiberalism, anti-intellectualism, and authoritarianism”:

In the aftermath of the killing of George Floyd in Minneapolis, and with a global pandemic rocking the economy, families, and every aspect of our social and cultural lives, the country is riven with dissention and violence. Murder and violent crimes are increasing in large metropolitan areas. And basic public health protocols, like wearing face masks in public places, have become political litmus tests leading to more infection spread and death. And worse yet, forces of anarchy and political desperation cynically stoke these fires of division to pursue or retain power. As we watch all this unfold in real time before our eyes — shootings of protestors and federal security guards; federal troops using extreme tactics; passers-by screaming racial epithets at a man peacefully holding a Black Lives Matter sign; burning and vandalizing of courthouses (just to name a few) — one could reasonably wonder if the American experiment can survive it all.

Across the political spectrum, while sounding the alarm regarding the perilous state of our country in this moment, many see reason to hope. But survival of our democracy, as they point out, will not happen just because we want it to; we will have to work for it, struggling not only against the haunting ghosts of our nation’s past, but against new forces of illiberalism, anti-intellectualism, and authoritarianism — from social media trolls, to conspiracy theories like Q-Anon, to Russian interference in our election, and even the siren call of nostalgia for the good old days. Our leaders must, of course, do this by respecting the rules of the game and the rule of law and appointing judges who, to paraphrase Chief Justice John Roberts, are neither Republican nor Democrat, but women and men doing their level best to follow the rule of law; and, to bring it back home to this case — we need to educate our younger generation, the ones who will inherit the mess we are making and ultimately be responsible for the success or failure of American democracy for generations to come.

Judge Smith said that although he could not “provide the remedy Plaintiffs seek,” he wanted the opinion to function as the “Court add[ing] its voice to Plaintiffs’ in calling attention to their plea.”

America has reached a fork in the road and it’s a now or never situation, the judge concluded.

“This is what it all comes down to: we may choose to survive as a country by respecting our Constitution, the laws and norms of political and civic behavior, and by educating our children on civics, the rule of law, and what it really means to be an American, and what America means,” Smith wrote. “Or, we may ignore these things at our and their peril. Unfortunately, this Court cannot, for the reasons explained below, deliver or dictate the solution — but, in denying that relief, I hope I can at least call out the need for it.”